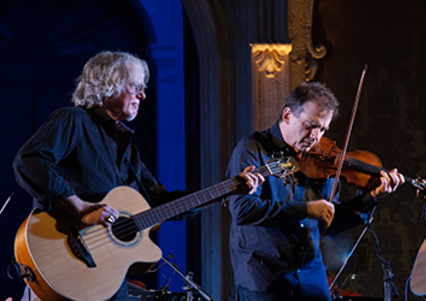 On Monday, November 7 at 7:30 p.m., Harris Theater for Music and Dance will present the Chicago premiere of Concerto for Violin, Rock Band and String Orchestra, the first-ever classical work composed and performed by R.E.M. bassist and songwriter Mike Mills. Mills composed the concerto for his longtime friend and new musical collaborator, critically acclaimed violinist Robert McDuffie, with whom Mills has been close since the two grew up together in Macon, GA. The pair will be joined by Chicago’s own Fifth House Ensemble which has been praised by The New York Times for its “conviction, authority and finesse.”

​About the piece Mills says, “It is a pleasure and an honor to have composed and to perform this amazing project alongside my old friend Bobby, whose imagination and encouragement got the whole thing off the ground in the first place. I can't wait to see where it takes us.”

​“Mike has created a beautiful and joyful concerto,” McDuffie adds. “It’s a work that goes straight to your heart, and by the end you'll want to dance and move to the South. I’m delighted and honored (and a bit nervous!) to be making music and sharing the stage with Mike and his amazing colleagues. It’s going to be an awesome ride.”

The concerto, with orchestration and additional music by David Mallamud, features McDuffie performing on violin; a four-member rock band led by composer Mills (performing on bass and keyboard) with two electric guitarists and a drummer; and a string orchestra. The Toronto Star hailed the piece’s world debut as “a winning way to introduce symphony to a new generation.”

​Mike Mills is one of the founding members of R.E.M., the internationally-acclaimed rock band from Athens, GA, and a member of the Rock and Roll Hall of Fame. His trademark vocal harmonies and intricate bass lines led fans and critics alike to dub him the band’s “secret weapon.”

Grammy nominated, Juilliard-trained violinist Robert McDuffie enjoys a dynamic and multi-faceted career. While appearing as soloist with the world’s foremost orchestras, he can also be found sharing the stage with Gregg Allman and Chuck Leavell in Midnight Rider, with actress/playwright Anna Deavere Smith in Martin Luther King’s Letter from Birmingham Jail, or playing Bach for Memphis Jook dancer Lil Buck. Philip Glass dedicated his second violin concerto, The American Four Seasons, to McDuffie. He is also the founder of both the Rome Chamber Music Festival in Italy and The Robert McDuffie Center for Strings at Mercer University in his native city of Macon, Georgia.

Concerto for Violin, Rock Band and String Orchestra is out now on disc via Orange Mountain Music.

​For more information about the upcoming concert or for tickets, visit harristheaterchicago.org or call the Harris Theater Box Office at 312.334.7777.