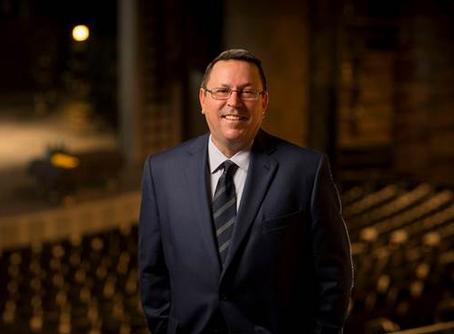 Organisak succeeds Michael Tiknis, who was President and Managing director since 2005.

He comes to the Harris Theater with a breadth of experience spanning a 30-year career in arts administration. He most recently served jointly as Vice President of Programming for the Pittsburgh Cultural Trust and Executive Director of the Pittsburgh Dance Council, which became a division of the Trust in 2002, managing an overall budget of nearly $16 million.  While in these roles, Organisak’s programming responsibilities covered the entire spectrum of performance including dance, music, Broadway, cabaret and cross-disciplinary performance. He has co-curated several international festivals including the Cultural Trust’s Pittsburgh International Festival of Firsts as well as a series of country-specific festivals.

​“We’re excited to welcome Paul to his new role at the Harris Theater and we are confident that the organization will thrive under his leadership,” said Alexandra Nichols, Chairman of the Board of the Harris Theater for Music and Dance.  “Mr. Organisak is a true collaborator and comes with an impressive track record. We look forward to strengthening the organization under his guidance and vision.”

“I am honored and thrilled to join the team of the Harris Theater for Music and Dance. Its status as a world-class theatre, a fantastic venue for so many Chicago-based companies, and a cultural jewel of Chicago drew me immediately to this position. I look forward to building upon its marvelous reputation and I am proud to be able to contribute to it in such a significant role.” said new President and CEO, Paul Organisak.

​Mr. Organisak’s prior leadership positions include Dance Umbrella (Boston), the American College Dance Festival Association (ACDFA), and the Pittsburgh Dance Council.  He has served on several professional boards and panels, including Dance/USA, the PA Council on the Arts, Mid-Atlantic Arts Foundation, National College Choreography Initiative, the Arts Education Planning Process and Partnership, among others. Organisak holds a degree from the University of Michigan/Ann Arbor with a focus in music history / musicology.

Of course, Harris Theater has quickly become Chicago’s primary residence for music and dance, connecting diverse audiences with world-class artists from across the city, the nation, and the globe. The Theater’s activities fall under three central strategies: support for local music and dance companies, community engagement and educational programs, and presentation of national and international artists. The Harris’ original group of 12 resident companies has grown to include 35 diverse organizations. Through these partnerships, the theater has earned national recognition as a distinctive model for collaboration, performance and artistic advancement.

​To learn more about Harris Theater programming, visit HarrisTheaterChicago.org or call the Box Office at 312.334.7777.