Bronzeville artist Hebru Brantley is something of an enigma, a visual artist who expands upon the gritty milieu of street art with conspicuous influences from Pop Art, Japanese anime and hip hop to reveal a deep seeded poetry that compels us to look beyond the imagery and see the meaning conveyed beneath. Never resting on his laurels, the uniqueness of that signature aesthetic or even the wild popularity of his creative output (counting the likes of George Lucas, LeBron James and the Pritzker Family among his many famous fans and collectors), Brantley revels in the ability to connote with his work. He uses dynamism to immerse his viewer in ideas, to get them thinking and perhaps thereby move beyond observation to revelation.

That is the task he takes on in his latest solo exhibition, Forced Field, on view this fall at the Elmhurst Art Museum.

As with his first solo show, Parade Rain Day (at Chicago’s Cultural Center last season) in Forced Field, Brantley utilizes his signature hip hop characters, Flyboy and Lil Mama to convey the conflicting emotions of circumstances that stretch beyond human control. Where Parade Rain Day focused on the push and pull of optimism and pessimism in the face of sometimes crippling circumstances, Forced Field examines the tangible and intangible barriers that many of those circumstances often create.

Says Brantley, “(Forced Field) deals with a variety of themes in the human condition but focuses on the idea of confined space and geographical boundaries that become mental boundaries that are passed down through generations, thus creating a forced field.” As the concept is often one of unseen barriers, Brantley’s Forced Field aptly sheds light not only their presence, but also their pervasive impact on the community he loves.

The series is part of a three year journey Brantley has been taking with his work that examines the psychology of struggle and resilience resulting from the kind of deep societal imbalance the artist has likely observed growing up in Chicago’s Bronzeville in the ‘80s. And his response to that imbalance surfaces in the narratives he articulates with his work, drawing the viewer in with entirely accessible styles while compelling them to explore the wealth of  ideas he presents.

Brantley draws from a love of street art, a love he gained as a child but fueled by a distinct admiration for the work of famed artist Jean Michel Basquait. Basquait was a noted member of the informal graffiti duo, SAMO©, that came to fame in the late ‘70s. He gleaned inspiration from street art, hip hop and neo-expressionist movements and drew attention to the distinct dichotomies and imbalance he saw in society.

Brantley’s approach takes the style a step further by referencing bright color pallets of Pop art motifs, anime as well as traditional techniques, adding a wealth of diversity and a healthy element of the unexpected in the process.

The diversity in Brantley’s unique aesthetic is what bridges the gap between what is seen as street or graffiti art and the potent message that often comes with traditional art aesthetics, proffering a fluidity often absent in works bound more securely within a set style. According to Brantley, that fluidity provides weight and meaning for his audience, and that weight creates validity for the potent messages he communicates.

It’s a clever device that has rarely been used so effectively, and never so much as with Brantley’s artistic bravado, not to mention his fame. Yet one can suppose that too is an effective tool for Brantley's message.

His work hangs in the homes of some of the entertainment world’s biggest luminaries. His accessibility has paved the way for collaborations with titanic brands Nike and Adidas, expanding the reach of his work and his ideas.

Forced Field will mark Brantley’s debut at the Mies van der Roe designed Elmhurst Art Museum, and for Jenny Gibbs, the museum’s executive director, it marks a welcome opportunity to show an artist that has been on the museum’s radar for quite some time. “I have wanted to present the work of Hebru Brantley for years” says Gibbs. “Hebru's complex readings and visual responses in Forced Field offer playful and profound (dialogues on) serious questions surrounding race, cultural stereotypes, segregation and personal ambition, among other things. Hebru loves Chicago, warts and all. This show explores the beauty and also the sadness of the current human condition in this most American of all cities.”

In addition to introducing Brantley and his work to Chicago’s western suburbs, Forced Field will also offer the artist a chance to spread out a bit with respect to  the size and scope of his presentation. It’s a benefit Brantley welcomes. “This is the first time that I’ve been given the space and freedom to create on this scale,” he told me. “The space lends itself not only to large scale painting but also large scale sculpture.” And that’s something that plays to Brantley’s strengths as a diverse multi-media creator.

Bringing his iconic figures to life on a full scale is something he has been doing since his 2014 collection, The Watch. The large scale, brightly colored sculptures inspired by the Tuskegee Airmen and featuring his iconic Fly Boys and Girls were installed in Chicago’s Pioneer Court  in 2014, garnering massive attention for by Chicago’s art community.

For Brantley, it’s just another step in his journey to bring a real message that gets us thinking, adding thrust to a style of art that has long merited more weight and forging a path that marries message and mode, elevating both and illuminating us all in the process.

Forced Field will be on view at Elmhurst Art Museum September 9 through November 16. Several ancillary events will accompany the exhibition, including an opportunity to meet the artist during the exhibit's opening on September 9; a panel discussion including Mr. Brantley on the power of public art (in conjunction with the Year of Public Art celebration in Chicago); and a mural tour of Chicago that includes the iconic Wabash Corridor downtown. 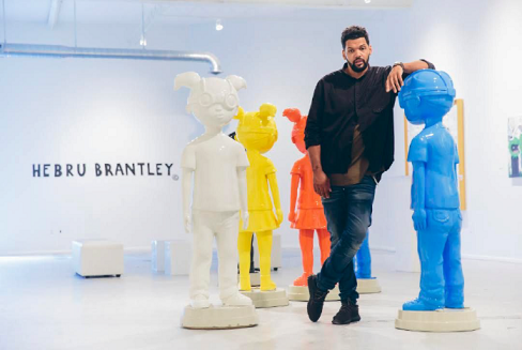 MODE & MESSAGE
With a penchant for street art, Japanese anime and Pop influences, artist Hebru Brantley and his iconic hip hop characters get their introduction to the western suburbs in Forced Field, his newest solo show debuting at Elmhurst Art Museum this fall.