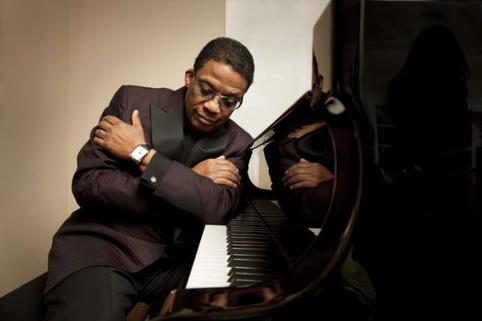 Legendary pianist and composer Herbie Hancock returns to Chicago for a Symphony Center Presents Special Concert on Saturday, October 21 at 8 p.m., as part of his first tour with a full band since 2011. The winner of 14 Grammy Awards including Album of the Year (2007), Hancock’s influence on the world of jazz and rhythm and blues has now spanned five decades and continues to inspire musicians across all genres. The October 21 performance is Hancock’s first Symphony Center appearance since 2015, when he performed with Chick Corea in a sold-out SCP Jazz series concert.

For this performance, Hancock is joined by an all-star band featuring drummer Vinnie Colaiuta, bassist James Genus, and keyboardist and saxophonist Terrace Martin. The program includes music from Hancock’s highly anticipated new album, along with popular selections from throughout his celebrated career.

A native of Chicago’s Hyde Park neighborhood, Hancock was a child piano prodigy and performed a movement of a Mozart piano concerto with the Chicago Symphony Orchestra at age 11. He began playing jazz in high school, initially influenced by Oscar Peterson and Bill Evans. Hancock’s musical explorations have included acoustic jazz, electronic and pop music, as well as collaborations with a range of performers including Miles Davis, Wayne Shorter, Wynton Marsalis, Stevie Wonder, Kathleen Battle, Sting, Carlos Santana and Paul Simon, among others. Hancock received an Academy Award for his Round Midnight film score and 14 Grammy Awards including Album of the Year for River: The Joni Letters. He currently serves as Creative Chair for Jazz for the Los Angeles Philharmonic and as Institute Chairman of the Thelonius Monk Institute of Jazz. In 2011, Hancock was named a UNESCO Goodwill Ambassador by UNESCO Director-General Irina Bokova, received a Kennedy Center Honors Award in 2013, and a Grammy Award for Lifetime Achievement in 2016.