Trust is a very peculiar thing, if you think about it. At first glance, we give it to total strangers with very little basis or provocation. We expect our trust to be rewarded. But once breached, suspicions and paranoia emerge and cloud every decision we make. Perhaps it’s with that in mind that American Playwright Steven Dietz wrote How a Boy Falls, receiving its world premiere this winter at Northlight Theatre in Skokie.

Dietz’s play thrusts audiences into the story of doubt cast upon a newly hired au pair at the center of a mystery that emerges when the young boy she cares for is suddenly lost. Uncertainly looms upon the boy’s wealthy parents, who want answers from their au pair—along with a healthy dose of retaliation. But she is hatching a dangerous scheme of her own that threatens to wreak havoc on the entire situation. No one is who they seem in this taut thriller from one of America’s most prolific playwrights, and in Northlight’s world premiere production, director Halena Kays is cognitive of the pitfalls that such a lofty debut may hold.

Expectations can create a kind of energy that haunts a production if you let it. But Kays is also cognizant of the jewel she has in the repository of collaborative support Dietz lends this evolving work and what it can mean for the success of her world premiere. “Thankfully, Dietz is one of the most supportive and giving collaborators on the planet, so getting to work with him on this world premiere is filled with more joy than anxiety about its import,” Kays told me. “One of the biggest differences in pulling off a world premiere versus a play that has stood the test of time is that the team behind it needs to be agile and excited about change, the script will continue to change and our actors and designers need to be gifted at supporting those changes and asking smart questions in the journey.  My job is to gather the right people in the room to support Dietz as he continues to explore this play, its structure and its journey and to not hang on too tightly to any single moment or theme but support as these themes and moments expand and get more specific.  It’s my favorite type of work and it keeps me on my toes.”

Being nimble and maintaining synergy among key components of a production like this are things Kays is no stranger to. She’s worn many hats throughout her career.

The Chicago and Nashville based theater director and artist is the co-founder and former artistic director of the bold theatrical collective, Barrel of Moneys, where she created and directed the majority of their public performances. She’s a founding member of the artistic collaborative, The Ruffians, and directs their recurring hit production, Burning Bluebeard, along with other experimental live performances of theirs. The UT-Austin and Northwestern graduate was also for some time a member of the Big Apple Circus Clown Care unit. She currently serves as artistic associate with the Neo-Futurists, where she directed Pop/Walts, 44 Plays for 44 Presidents and co-created and directed Daredevils and Daredevils Hamlet, along with the site specific extravaganza, Fake Lake.

Her career is replete with the kind of bold, challenging projects that require Herculean problem solving on a myriad of fronts, which keeps her nimble and ready for challenges as they come.

Those posed by Northlight Theatre’s upcoming production notwithstanding, Kays is eager to sink her teeth into Dietz work because of the innate spontaneity his writing naturally builds through structure and storytelling, something she trusts will yield a few very telling discoveries for her audience. Dietz is well known as a craftsman of the written word, and the tension he wields is refined through his innate curiosity, expertise in narrative and structure, and of course, suspense. “My sense is that (Dietz) loves weaving tails of suspense and intrigue because it forces his characters to respond in the moment,” said Kays. “To be smart and desperate and, ultimately, to reveal some elegant truths about what it means to be human.  At its essence all of his work comes down to relationships and empathy.  This, in combination with his craft, makes for thrilling theater.”

But one of the problems Kays will grapple with in Northlight’s production of How a Boy Falls will be creating the physical tension necessary to build the suspense inherent in Dietz script. For that she has tapped a cast comfortable with the physical language she is developing for this world premiere. “We've gathered an amazing cast, who are physical and wild and playful,” Kays explained. By taking advantage of these unique skill sets, a physical language will be honed both within Kays’ scene work and in how the play moves forward in and out of time. As the play develops, it becomes clear that people aren’t who they appear to be. This is largely communicated through Kays’ physical language. “Many of the characters are performing who they think their scene partners want them to be,” Kays told me. “This is an exciting opportunity for performers to find versions of character behavior that shifts in time and circumstance.  My comfort zone is in the realm of physical theater so this part of the process is one I am most excited about exploring.”

​Building a cast she trusts to flesh out that language, Kays tells me, was a mixture of instinct in the casting room and ensemble building in the rehearsal space. “I always choose actors who are ‘game’ to play and discover together in a supportive space. I see much of my job as creating circumstances where actors can succeed, in this environment I've found actors risk, trust each other and create beautiful moments.” For Kays, Deitz’s script conveys a wealth of his generosity of spirit, down through the words “to the point of view and ultimately to the whole creative team.”

All of these elements help to build gripping suspense in How a Boy Falls which is signature to Dietz’s work, bit by bit with unrelenting tension. In How a Boy Falls it’s the past that seems to permeate through the work to erupt and disrupt the circumstances of our play. Kays explains, “The title can clue us into a theme that this play is interested in: how do we fall into the life we find ourselves in?  What do we allow to continue and when do we take action to change the course of our lives?  Past informs present and the present can reshape how we understand our past, our past can be weaponized to ruin our future. And our pasts can feed our current sense of self (in positive and negative ways).  In the electronic age, what does this mean about identity and self-hood?  Each character in How a Boy Falls is wrestling with this notion of identity and self-determination in different ways- as we add the element of the "thriller" into these heady questions, we find a story the serves these philosophical concerns with excitement and danger.”

​With identities not what they seem, the revelation of the truth creates even more tension. But this isn’t a theatrical device for Kays to struggle with. She insists she allows them to emerge organically, crafting them around the notion of expectations and reveals. For her it’s all baked into the script, anyway. So if she follows Dietz’ vision and is specific and clear in her choices, it will all emerge in a rather spontaneous and inspired fashion. “I'm a tremendous fan of the ‘thriller’ genre,” Kays explained. “And we have some terrific classics to turn to when we get stuck. In the end I always trust Hitchcock. I think all of this goes back to finding the fun in the authentic life and death situations imagined by Dietz- when we are free to explore the many levels of what is at play in each scene, we will create a terrific experience for audience and performer.”

For the final piece of this puzzle, setting the stage for Dietz’s narrative, Kays places immense trust in her production team, one that is “remarkable in their curiosity and commitment to collaboration,” she insists. Dietz’s script is very specific in how the play moves from scene to scene, and this has inspired Kays and her team in how design and spectacle can enhance and support the language and movement of the whole.

“One of my favorite parts of working on a new play is creating the ideal world for it to function best, she told me. “We've taken from classic films, visual art and a modern sense of style and sophistication to move through the work.  It is also exciting because I am working with collaborators I have a history with (Lizzie Bracken and Rick Simms) and collaborators who are new pals (Izumi and Jason) this has created a dynamic process that has made me so thrilled to get this show in the space and share it with audiences.”

As for the unveiling of this new work, Kays trusts Chicago audiences to be receptive to this tightly woven piece. “Chicago is the best place to make live performance. Our audiences are excited by risk and ready to engage with so many different styles and voices.  I have always felt supported and encouraged to continue to push the form and function of theater in Chicago because our audiences are ready to take that ride with us.”

​How a Boy Falls runs at Northlight Theatre at the North Shore Center for the Performing Arts in Skokie January 23 – March 1, 2020. 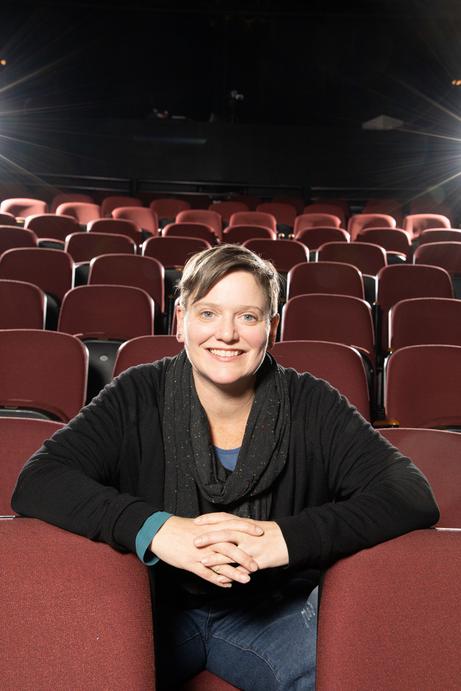