The Grinch at the Chicago Theatre (photo by Dan Rest).

The producers of Dr. Seuss’ How The Grinch Stole Christmas! The Musical have announced that Shuler Hensley will star as the Grinch in the 2014 production at The Chicago Theatre. The whimsical family production, which first won over Broadway audiences in 2006 and 2007, will return for a limited holiday engagement from Thursday, November 20 to Saturday, November 29.

Shuler Hensley has appeared on Broadway in No Man’s Land, Tarzan, Waiting for Godot and Young Frankenstein since being awarded the Tony Award for his performance as Jud in the 2002 Broadway revival of Oklahoma! Prior to his triumphant turn as Jud, Hensley played Inspector Javert in Les Miserables.

For as long as I can remember, the Grinch has been a part of my Holiday experience,” says Shuler Hensley.
“As a kid, watching Dr. Seuss’ How the Grinch Stole Christmas always helped remind me of the true meaning of Christmas, and the fact that I can now be a part of this story and share it with my own kids is amazing!”

Audiences just may find their hearts growing a few sizes (along with the Grinch’s heart, of course) when they see live stage performances of the hit songs, “You’re a Mean One, Mr. Grinch” and “Welcome Christmas,” both from the original animated television special. Max the Dog serves as the story’s narrator as the scheming Grinch plans to steal Christmas away from the loveable Whos down in Whoville.

The 2014 production is directed by Matt August and choreographed by Bob Richard based on the original choreography by John DeLuca and originally created by three-time Tony Award winning director Jack O’Brien.

Performances of the 2014 Dr. Seuss’ How The Grinch Stole Christmas! The Musical begin November 20 and run through November 29 at The Chicago Theatre. Tickets can be purchased at www.thechicagotheatre.com/thegrinch and through Ticketmaster Charge By Phone (1-866-858-0008) and all Ticketmaster Outlets. Tickets will also be available in person at The Chicago Theatre Box Office.

Tony Award Winner Shuler Hensley Cast to Star in How the Grinch Stole Christmas! The Musical at Chicago Theatre 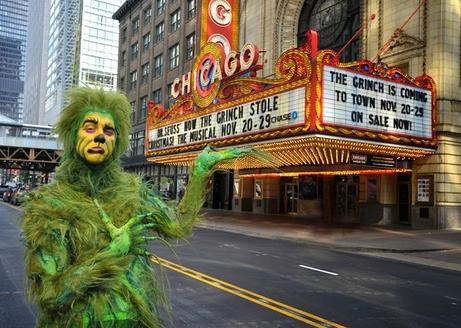