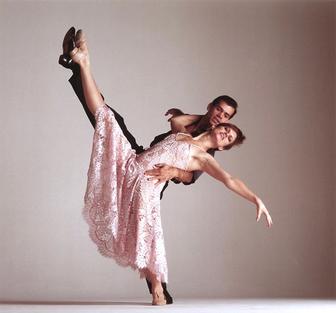 In celebration of the launch of its 40th anniversary season, Hubbard Street Dance Chicago's Summer Series looks to its past with an eye toward its future.

​For four decades, Hubbard Street Dance Chicago has been at the forefront of contemporary dance and has been a true cultural gem for Chicagoans to love. Representing Chicago nationally and worldwide, Hubbard Street’s dancers are some of the best in the world, and the company has performed works by the world’s most revered choreographers. The upcoming Summer Series officially opens the company’s 40th season with a program celebrating its past while looking forward to the future. By curating works that represent important milestones within Hubbard Street’s history, artistic director of the company Glenn Edgerton and his team have created a program that takes us on a path down Hubbard Street’s memory, reminding us of just how far they’ve come. Edgerton explains, “It is an honor to be the artistic director of Hubbard Street, especially at this time. I value this position but I know that it also comes with a responsibility to do right by the audience (and) challenge their expectations of what they think Hubbard Street is. There is a need to always be evolving and the Summer Series programming will make that trajectory very clear.” Before focusing on this future trajectory however, Hubbard Street’s impressive past will be front and center.

​First came the Lou Conte Dance Studio, opening at LaSalle and Hubbard Streets in 1974 when Conte gathered four dancers to perform at senior centers across Chicago. This small endeavor grew much beyond its humble beginnings throughout the years as Conte initiated and grew relationships with both emerging and established international artists including Nacho Duato, Daniel Ezralow, Jiří Kylián, Ohad Naharin, Lynne Taylor-Corbett and Twyla Tharp, some of the world’s biggest names in the contemporary dance world. As the company grew, international focus for Hubbard Street came more prominently with Conte’s successor, Jim Vincent. On the homefront, Vincent began Hubbard Street’s collaboration with the Chicago Symphony Orchestra and launched the Inside/Out Choreographic Workshop.

​​Vincent also installed the company’s first (and only, to date) resident choreographer, Alejandro Cerrudo. Cerrudo has since created 16 works on the company, numbering more works now than the original Conte himself. In 2009 Edgerton was appointed and, along with executive director Jason Palmquist, continued to move the burgeoning legacy forward. Inside/Out now begins the creative process for danc(e)volve, an innovative dance-making program with two weeks devoted to new work presented at the Museum of Contemporary Art. Current partnerships with the CSO, and the Art Institute of Chicago play an important role in including Chicago’s broader arts community in the company’s home season. Hubbard Street generally performs three series shows at The Harris Theater for Music and Dance in Chicago’s Millennium Park and embarks on extensive national and international tours each season.

Edgerton has recently brought significant new voices to the Hubbard Street tapestry such as Mats Ek and Sharon Eyal, Alonzo King and Victor Quijada. And in 2009, Hubbard Street launched youth and family programs and, harkening back to Conte’s beginnings, the company now conducts classes for people with Parkinson’s, which are the first dance classes in the Midwest for those affected by the disease.

​Now entering its fortieth season, Hubbard Street prepares for a momentous anniversary by invoking a little sentimentality. Using works in which original members of the company will be involved in remounting, and even using original costumes from the 70’s, remade to fit the current company, the program brings multiple generations of important Hubbard Street players into the same studio.

The Summer Series will include two of Conte’s original works (presented in reverse chronological order) The 40s, a beloved fan favorite, and Georgia, originally premiered in 1987 as part of the triptych “Rose from the Blues.” Legendary choreographer Twyla Tharp will be represented with The Golden Section, originally premiered on Broadway in 1981, and debuted by Hubbard Street at the Holland Dance Festival in the Netherlands in 1991. Choreographies representing a more contemporary time include William Forsythe’s One Flat Thing; Crystal Pite’s A Picture of You Falling; scenes from the 2007 Palladio by former Hubbard Street artistic director Jim Vincent; and One Thousand Pieces, the company’s first evening-length production, created by Alejandro Cerrudo in 2012. Each of these works stands on its own but is included in this program for its ties to momentous events within the history of the company.

​Cerrudo’s work not only gives a well-deserved nod to his sizeable contribution to the company’s legacy, but it also reminds audiences of the Art Institute’s presentation of Marc Chagall’s America Windows, and of Hubbard Street’s memorable 35th Anniversary Season. Tharp’s work reminds audiences of Hubbard Street’s 10 year initiative, which began in 1990 as a partnership between the influential choreographer and the company.

Of the works on tap for the coming Summer Series production Edgerton notes, “The premise for the Summer Series programming is to present an overview of the four decades of Hubbard Street’s history, highlighting the prominent choreographers and choreography created during each decade.”

At the center of this 40th Anniversary season opener is The 40’s. The original work by Lou Conte celebrated the decade with the four original Hubbard Street dancers. “The 40s is an iconic work and everyone who knows Hubbard Street from the past remembers and loves the piece,” says Edgerton. “I thought it was important to put these two moments together; our 40th anniversary, The 40s. This piece solidifies the history of the company and also has brought everyone in the company together, especially by bringing our founding artistic director, Lou Conte, into the studio to work with our current dancers.”

Also back in the rehearsal studio is one of the four original Hubbard Street company members, Claire Bataille. Bataille now acts as the director of the Lou Conte Dance School and will play an important role in remounting Conte’s original work. As the company rehearses, they bring back major players, keeping it all in the family in the studio to set the works on the current company of 13 dancers.

While the occasion is momentous, the means of realizing this celebration will be relatively the same as it would be for any other work. Edgerton explains, “The process is the same as most pieces we stage for the company. First, we bring in a stager to teach the work. Having Claire in the studio has been a nice touch; she brings first-hand knowledge and experience to the pieces. Then the choreographer, in this case Lou Conte, comes in to enhance and finesse the work. The costumes and the music will be the same as when The 40s premiered in 1977.”

​So, after 40 years, and performances in 44 states and 19 countries, it all comes back to those first days, and the celebration of decades past. The Summer Series will bring nostalgia to long-time devotees of the company and will show a new generation of Hubbard Street die-hards just how momentous a legacy they enter into. The company will continue to celebrate into the next year with a full program of work by Crystal Pite on the docket for the 2017-2018 season.

Hubbard Street will also return for the first time in 20 years to the Auditorium Theater with a full evening of Cerrudo, and will finish out their anniversary season with Ohad Naharin’s Minus 16.

Here’s hoping the next 40 years are as fruitful as the last.