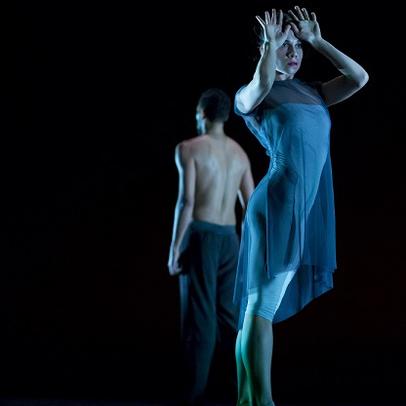 Hubbard Street Dance Chicago and artistic director Glenn Edgerton recently announced the company’s second mainstage engagement of the 2015–16 dance season, and the program looks to be nothing short of spectacular.

Hubbard Street’s Season 38 Winter Series features the Company premiere and first production by a U.S. dance company of Solo Echo by Crystal Pite, originally created for Nederlands Dans Theater in 2012. Inspired by poet Mark Strand’s Lines for Winter and set to excerpts from two sonatas for cello and piano by Johannes Brahms, opuses 38 and 99, Solo Echo is exemplary of the fluidity with which Pite’s choreography shifts between dance and theater, using both classical and contemporary techniques.

Says Amsterdam-based dance writer Lambrecht Wessels, “(Solo Echo) speaks of hope and holding on through the dark, as the dancers move as liquid..and presents a man reckoning with himself at the end of his life.”

Explains Pite, “The character is echoed — copied, reiterated, by seven different dancers. He is portrayed through both male and female bodies, and through various physiques and strengths. Each performer is a distinct and nuanced version of the character, and the connections between them evoke a man coming to terms with himself.”

Joining the main company for the Winter Series are the impressive early-career dancers of Hubbard Street 2 to perform a world premiere by Yin Yue, born and raised in China with an MFA in Dance from Tisch School of the Arts at NYU and currently artistic director of Yin Yue Dance Company, one of two artists selected in spring 2015 through Hubbard Street’s 16th annual International Commissioning Project. Titled A Glimpse Inside a Shared Story, Yue’s new work features a cast of five and fast-paced, athletic choreography set to music by Wolfgang Voigt (Gas), Rutger Zuydervelt (Machinefabriek) and Michel Banabila, and The Advent and Jason Fernandes, with original costume designs by Rebecca M. Shouse and lighting by Julie E. Ballard.

Esteemed choreographer Penny Saunders is also set to unveil a world premiere work during Hubbard Streets’ Winter Series, one that follows Saunders’ previous creations for Hubbard Street (Adalea, 2013), Hubbard Street 2 (Bonobo, 2012), and numerous projects for the company’s annual Inside/Out Choreographic Workshop. Its score features a wide-ranging collection of music including recordings by Icelandic artist Ólafur Arnalds, as well as from Silfra, the 2012 collaboration for violin and prepared piano between Grammy Award-winner Hilary Hahn and German composer Volker Bertelmann (Hauschka). A Hubbard Street dancer from 2004–13 who returned in August 2015, Saunders’ hiatus from the company “led to some interesting discoveries,” she explained, “about the fact that every place is always changing and moving forward, whether or not you are there. This new piece is, in part, my way of forging a dance within that truth.”

“Two of my core missions as Hubbard Street’s artistic director have been to bring the best choreography from the world’s stages to our audiences and dancers here in Chicago, and to foster the creative talents of the artists within our building in the West Loop. This Winter Series program is a great example, with two terrific contributions coming from longtime associates Penny Saunders and Robyn Mineko Williams, alongside a brilliant work created by a Canadian choreographer in the Netherlands, and the exciting new voice of an artist who divides her time between New York City and Nanchang, China. To top it all off, both of our ensembles get to share the Harris Theater’s stage for this December engagement. It’s quite fulfilling to recognize where we are in this moment.”

Presented at the Harris Theater for Music and Dance in Millennium Park, Hubbard Street’s Season 38 Winter Series will be performed December 10 through 13 and offer Chicagoans a first look at some of the most compelling new dance works on the live stage today.

For more information or for tickets to the upcoming performance, visit hubbardstreetdance.com or call the Harris Theater Box Office at 312.334.7777.