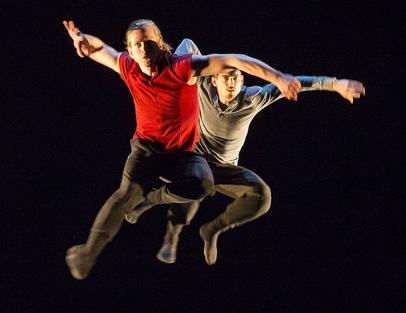 Back in January of 2012 at the Museum of Contemporary Art Chicago, Hubbard Street Dance Chicago launched a bold, new initiative that sought to cull choreographic talent from the very ranks of Hubbard Street dancers by providing a high profile platform for dance-making. Setting a commission by the company for select fellows to be set on the company, Hubbard Street would lend its considerable artistic and administrative strengths to harness the creative talent among its dancers culminating in a world premiere performance on the world stage. That’s quite a coupe for any young dancer aspiring to broaden their creative talents with a choreographic career.

The initiative, called danc(e)volve: New Works Festival, included a choreographic workshop where fellows would receive mentorship, bringing their ideas to the live stage, giving budding choreographers practical experience in nurturing their innovative concepts from ideas to choreography to performance. With a successful launch of the festival in their 34th season, the company brought back the concept in various stages, most notably in the 2016-2017 season when they gave the world premiere of former Hubbard Street dancer Mineko William’s visually striking Cloudline, a work which has gone on to considerable acclaim.

At that time, danc(e)volve served as a welcome post-season summer benefaction giving audiences a kind of behind-the-scenes look into the beloved Chicago-based dance company as well as the dance-making process. But today, Hubbard Street has incorporated the festival smack dab into the middle of its season.

This December, Hubbard Street will mount danc(e)volve 2018-2019, and this year’s festival may be the company’s most momentous one yet.

Each year, independent from the danc(e)volve initiative, the company designates select dancers as choreographic fellows. The fellowship program, says Edgerton offers reciprocal benefits to both the company and the fellows themselves. They work with Hubbard Street's Pro program of young, emerging professional dancers, teaching choreography in company intensives, which enhances the Fellows’ experience and that of its young participants. This year’s fellows, Rena Butler and Florian Lochner, have been tapped to bring new works to the danc(e)volve stage, but Hubbard Street Artistic Director Glenn Edgerton explained that with Hubbard Street’s 2017 choreographic fellow Alice Klock leaving the company to pursue choreography full-time, it seemed the right time to commission a new work from her to include in this season’s festival as a well-earned send-off.

The works planned for this year’s danc(e)volve production are as disparate as the experiences of the choreographers who created them. After all, as Edgerton points out, while these choreographers each have grown from the ranks of Hubbard Street’s innovative choreographic dance process, the works audiences will see this December each stem from the sum total of experiences that make these three dance creators the individuals they are. Says Edgerton, for the works on the program, “each choreographer has tapped into an aspect of their own lives and is representing a little piece of their psyche. Rena is representing her culture and the vast cultures she’s been inspired by through her travels in life. Florian is focused very much on family and the lineage of family concentrating on the past to present life. Alice has created a concept where she is expressing multi-layers of her spirit and personality all represented individually with each dancer and facet of her uniqueness.”

And though these dancers each have a wealth of experience to draw from, each has also developed extensive resumes that make dance(e)volve a natural next step in their careers. Having joined Hubbard Street's second company in 2009, Alice Klock was promoted to the main company in 2011 and has not only created choreographic work for Hubbard Street, but also The Nexus Project, Loyola University, Neos Dance Theater, Visceral Dance Chicago and NW Dance Project's LAUNCH. Dance Magazine dubbed her “densely dimensional, unpredictable, strangely graceful and wild.” Her new work, Fold Me, explores multi-dimensional iterations of the self, posing the question of what would happen if these iterations interacted. She explains, “For me, this piece is about exploring these different characters and how the worlds they exist in function.” Klock explains that the creation process emanated from a kind of query of the Hubbard Street dancers upon which the work would be set.  “From their answers I have built a piece that flushes out these self ascribed characters,” she says. “The choreography is both human and creature. Wild, unpredictable, and occasionally confusing.” Ultimately, says Klock, at its core, the work is about the attempts we make to connect ourselves with others and for that, she believes the work will resonate with audiences.

Florian Lochner will make his professional debut as a choreographer in the Season 41 Winter Series. A German native who’s danced with Hubbard Street since 2015, Lochner trained at Ballettschule Malsam in Schwäbisch Hall, Germany, and the Staatliche Hochschule für Musik und Darstellende Kunst in Mannheim, where he was the recipient of its Birgit Keil Dance Foundation scholarship. He will also serve as guest faculty during Hubbard Street's 2018 Summer Intensives and for Hubbard Street's Professional Program (HS Pro). Lochner was named Hubbard Street Dance Chicago’s Choreographic Fellow in January 2018.

For Lochner’s new work, Das Field, he took an approach similar to Klock in that a critical component of the work began with questions posed of the Hubbard Street dancers its been set upon. In Lochner’s case, the questions are all ones he has asked himself and the result helped to achieve the unique soundscape to which the piece will be performed. By interviewing his colleagues and using their voice recordings as part of his sound score, Das Feild explores personal relationships, history and how we wish to be remembered moving through life until death. For Lochner, setting Das Field on Hubbard Street dancers was a very personal process, one that he allowed to take on a very organic nature. Says, Lochner, “I (wanted) to see how the dancers took my movement and tell their own (stories).” By doing so, the work was able to evolve in a very intimate way.

Chicago native Rena Butler joined Hubbard Street in 2017 and has previously choreographed performances with numerous companies across the country. She’s danced with Kyle Abraham/Abraham.In.Motion, Bill T. Jones/Arnie Zane Company, David Dorfman Dance and Pasos Con Sabor Salsa Dance Company. In Butler’s new work, III Third, she explores her own culture and identity. III. Third serves as the final piece in a three-work series the choreographer is creating exploring gender, race and culture through the lens of her own personal experiences. While Butler's work did not begin with responses to queries of Hubbard Street dancers, her work is every bit as collaborative as that of her fellow danc(e)volve dancer/choreographers. For III.Third Butler developed personal characters for each Hubbard Street dancer and their own individual personal identity as viewed through what she calls societal lens. Butler then allowed each of the dancers to incorporate their own personal interpretations of these characters, making them their own, partaking in the dance-making process. She explains, “I choreographed a lot of phrase work, and had asked the dancers to augment the material to their personal way of interpretation. So, we met halfway. The movement is playful, athletic, challenging, sinuous yet cubistic and personal.”

As for the team realizing the three danc(e)volve works for the stage, Edgerton has made this year’s festival a family affair. From mentorship to set design to lighting, Hubbard Street insiders have all had a hand in bringing danc(e)volve 2018 choreographers’ visions to life. Edgerton says of the production, “Our rehearsal director, Jessica Tong and artistic liaison Jonathan Alsberry have been instrumental in the day-to-day rehearsals and development. I have had a few meetings with the choreographers working through the logistics. We declared costume designer Jenni Schwaner Ladd (our head of wardrobe) and lighting designer Kaili Story (our lighting supervisor) to create the atmosphere along with the concepts of the choreographers. I’m really happy that this program represents all in-house collaborators to highlight the amazing talent we work with every day.”

For years, Hubbard Street Dance Chicago has promoted a mission of “bringing artists, art and audiences together to enrich, engage, educate, transform and change lives through the experience of dance.” Experiencing the result of an evolutionary dance creation process that begins in collaboration, innovation and is rooted in bold personal experience, I can think of no better way to enrich, engage, educate, transform and change the lives of not only the audience, but everyone engaged and invested from the very start of this evolutionary process.