Hubbard Street Dance Chicago will highlight its November 17-20 Fall Series engagement at Harris Theater for Music and Dance with the company’s resident choreographer, Alejandro Cerrudo’s 15th original work for the company, a world premiere piece by 2013 Guggenheim Fellow and inaugural Harris Theater Choreographer in Residence Brian Brooks as well as the revival of two ensemble works by Jiří Kylián.

Says Hubbard Street’s artistic director, Glenn Edgerton, “Creating new work is at the core of what we do. I am excited to share two world premiere works and two masterworks with our home audience in Chicago by three choreographers who have inspired our dancers and audiences. Alejandro Cerrudohas been resident choreographer with the company since 2009. Alejandro continues to challenge himself and the dancers—this will be a significant work using the creativity of the entire company. Having Brian Brooks, the inaugural choreographer in residence for the Harris Theater working in our studios has been terrific. Brian's movement quality is unique which again challenges our dancers in new ways. Having the work of these choreographers on the same program as Jiří Kylián, an artist whose work we have a long affinity with shows the range of the company's abilities and connects Kylián’s classics with today’s outstanding artists."

​​A world premiere by Alejandro Cerrudo for Hubbard Street’s full ensemble of 17 dancers marks his 15th work for the company. Cerrudo will contrast the beauty of solo piano works by Johann Sebastian Bach, Franz Liszt and Franz Schubert with movement that provides a stylistic and synchronistic counterpoint. Cerrudo notes “The effect, I hope, is that you really hear and feel the music; that the dance brings its own complexities and nuances to the experience. I love changing the audience’s perception of a piece of music through my choreography and my work with the creative team.” Cerrudo will incorporate the work of designers Michael Korsh (lighting) and Branimira Ivanova (costumes) to create a performance that surprises and delights audiences who loved his One Thousand Pieces and Little mortal jump.

​In Brian Brooks’ newest work, Terrain (2016), conflict and collaboration coexist in a shared, intimate space. Set for Hubbard Street Dance Chicago’s 17 dancers, the company moves as if propelled by diametric forces, resistant yet inextricably linked. Shockwaves spread like currents as the group continuously folds in upon itself, reshaping and redirecting energy in an ever-changing tableau that reveals startling moments of individualism and collectivism. A bold mix of sounds—including Todd Reynolds’ propulsive, electronic re-composition of Terry Riley’s classic minimalist score In C—heightens the inherent tension, while lighting by Nicole Pearce and Costume design by Karen Young add to the overall aesthetic of this intriguing premiere by The Harris Theater for Music and Dance’s choreographer in residence.

Completing their Fall Series program, Hubbard Street will present two ensemble works by Czech-born, Holland-based dancemaker Jiří Kylián. Choreographed at Nederlands Dans Theater between 1986 and 1991, Kylián’s six “black and white” works are among the most influential in Western contemporary dance. In Spring of 2014, Hubbard Street added two of these works—Falling Angels (1989) and Sarabande (1990)—to three pieces already in the company’s repertoire: Petite Mort, Sechs Tanze and No More Play. Sarabande is set to J.S. Bach’s Second Partita for Solo Violin, with electronically manipulated sound made live by the dancers’ bodies and voices. Choreographed for six men, the piece uses indelible stage imagery to suggest the cast range of psychological states experience throughout a lifetime. Falling Angels, in contrast, features eight women who all remain on stage throughout the entirety of the piece. Set to Steven Reich’s Drumming: Part 1 (1970 – 71), a minimalist, phased composition inspired in part by percussion from Ghana, the group is continually fractured and recombined by the endlessly inventive pattering that Kylián exemplifies.

For more details about the upcoming Fall Series, at Harris Theater, visit hubbardstreetdance.com/fall. For tickets, visit the Harris Theater Box Office in person or online at harristheaterchicago.org or call 312.334.7777. 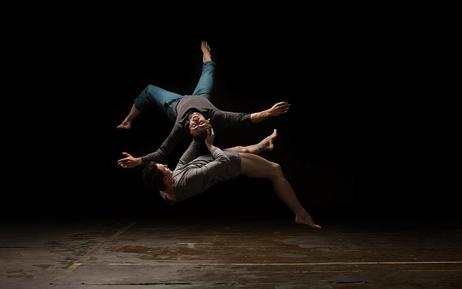