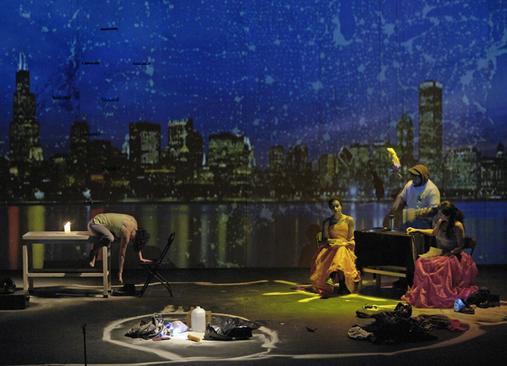 Major Latino theater companies from Latin America, the Caribbean and around the city will be showcased at DESTINOS (dĕ-stee-noce), the first Chicago International Latino Theater Festival, an ambitious month-long festival of ‘First voice’ plays and panels presented by Chicago Latino Theater Alliance (CLATA). The festival, which takes place September 29 - October 29, 2017, will certainly add to Chicago’s well-deserved reputation for being the most exciting theater city in the nation, festival-goers will experience works by four international companies from Latin America and the Caribbean: Arte Boricua (Puerto Rico), Ludi Teatro (Cuba), Teatro Línea de Sombra (Mexico) and Vueltas Bravas Producciones (Colombia), in addition to offerings from both coasts:  Felix Rojas (New York) and the exiting homecoming of Chicago founded Teatro Luna who has spent the past two years building Teatro Luna West (Los Angeles). Notably, the festival will mark the U.S. debut of Ludi Teatro as well as the Chicago debuts of Arte Boricua, Felix Rojas, Teatro Línea de Sombra and Vueltas Bravas Producciones. Augmenting the festival roster, with the support of CLATA will be works by Chicago’s own Latino theater companies Aguijón Theater, Teatro Vista, Urban Theater Company and Water People Theater.

“In Spanish, the word destinos has multiple meanings: destinies, destinations or fate,” explained Myrna Salazar, executive director, Chicago Latino Theater Alliance. “We believe that theater transports people to a place that transcends boundaries, and towards a broader outlook on the world. Through this, the inaugural Chicago International Latino Theater Festival –DESTINOS, shares the belief in the power of theater to amplify first-voice Latino artists and to create a cross-cultural experience.”

CLATA and Chicago Shakespeare Theater will co-present the Chicago debut of Teatro Línea de Sombra, one of Mexico’s most celebrated and forward-thinking ensembles. Its production of Amarillo, directed by Jorge A. Vargas, will be staged in Chicago Shakespeare’s soon-to-be-completed The Yard at Chicago Shakespeare (800 East Grand Avenue on Navy Pier) as part of its World’s Stage series, October 17–29, 2017.  More information on the production can be found at chicagoshakes.com/amarillo.

​“We are thrilled to participate in this important new festival that showcases both Chicago Latino theatre makers and international artists, examining the Latino experience from multiple perspectives and through a variety of theatrical genres and styles,” said Chicago Shakespeare’s executive director, Criss Henderson. “Through our World’s Stage program, we strive to engage in a global artistic exchange to break down barriers that separate our cultures and communities. Now more than ever, these collaborations and conversations are vitally important.”

“The Chicago International Latino Theater Festival will give Latino artists and performers greater visibility,” said Martin R. Castro, founding board chair of CLATA.“With the historic establishment of the Chicago Latino Theatre Alliance, and now this incredible festival, it is certain that we have enhanced Chicago’s standing as a world-class theater destination.”

Through its mission, CLATA aims to preserve and promote Latino cultural heritage by fostering the best works of Pan-Latino playwrights and by presenting culturally savvy productions that will not only engage Latino communities, but incite cross-cultural exchange amongst a diverse range of communities in Chicago.