Both literally and figuratively speaking, Bavarian-born soprano Christiane Karg has come quite a distance from her years studying voice at the Salzburg Mozarteum. One might say it has been quite an auspicious journey for her. In fact, “journey” is exactly the word Karg prefers. She sees something rather confining in viewing a career in music as…well, a career. A widely acclaimed concert performer, opera singer and recording artist, Karg doesn’t view her life’s work so isolated and inaccessible as the word career might suggest. She understands her path as a journey. She insists as much, “I do not like so much the word ‘career,’ she told me. “It’s a long path we have to (travel) and it’s not finished…at least I do hope so.”

​Karg finds real meaning in the journey she’s been on since her days in Salzburg. She launched her journey quite like so many artists before her, as a child, often spending inordinate amounts of time studying and pursing a nascent passion for music.

It was at the Salzburg Mozartium that Karg met her greatest influence, famed German tenor and pedagogue Heiner Hopfner. Hopfner would carefully mentor and shape the talented young student into a mature and nuanced young artist, cultivating a musical sensitivity that stretched far beyond her years with a wealth of concentrated study in Lieder and art song, that in addition, of course, to the typical battery of operatic arias that form the musical arsenal of so many young competition singers today.

With “passion and patience,” as Karg explained it, Hopfner developed not only her diverse repertoire but also her understanding of the infinitesimal variants in color, shape and phrase that might one day form her own arsenal on the concert stage. She is known for a deep well of musical sensitivity and élan likely shaped during those lessons back in Salzburg, not very far from her childhood home. With a formidable teacher and a great deal of “choice,” as she noted, Karg would be tapped as Opernwelt Magazine’s 2009 Young Performer of the Year—just one of a numerous industry accolades that would quickly follow.

Ironically, like many other young artists, choice is the last thing she enjoyed in her early years as a professional. Says Karg, “In a way I took the jobs that I was offered. At the beginning you can’t choose so much. I was happy to have some work. And if the repertoire was not completely crazy, I signed the contract." And signing the contract opened the artist to the vast array of dissimilar professional experiences an emerging  young concert performer can expect, broadening the scope of her journey and fostering a generous comfort level in performing diverse repertoire for diverse audiences in equally diverse concert settings.

​Putting in her dues, as it were, paid off in droves for Karg when, as a member of the Frankfurt Opera, her journey brought her one of the many treasured firsts that would shape her musical path. Chosen to sing Mélisande in Claus Guth’s widely acclaimed new production of Pelleas and Mélisande, Karg’s performance earned her rave reviews and welcome attention from major opera centers across the globe.

Her schedule would quickly become peppered considerably with engagements with some of the world’s leading opera houses, concert centers and symphony orchestras, offering the choice so absent from her early journey.

In 2006, she made an impressive debut at the Salzburg Festival with Riccardo Muti. She’s also appeared with the London Symphony Orchestra, Vienna Symphony Orchestra, the Dresden Staatskapelle and the Berlin Philharmonic, just to name a notable few. She’s graced the stages of the Vienna Musikverein, Wigmore Hall and the Edinburgh International Festival, where she was honored with the Herald Angel Award. Her more recent debuts include the Royal Opera House; Covent Garden; Teatro alla Scala, Milan, and Lyric Opera in Chicago last season, where she sang Susannah in a critically acclaimed production of Mozart’s The Marriage of Figaro. It was directed by Chicago Shakespeare Theatre artistic director Barbara Gains and offered the city an edgy, if almost risqué, look at the familiar and beloved opera. For Karg, working with a director whose perspective lay outside the traditional landscape of opera staging, the whole experience was a breath of fresh air. “It can always be interesting to work with someone who’s not coming from (the world of) opera and has no fixed ideas on how a new Figaro has to be,” she told me. “(That is true) especially with a piece that is so well known; many productions (become) similar to others. It was refreshing to come from a different point of view as Barbara did.” Karg noted that in European venues, edgy is par for the course, and she welcomed the opportunity to push some boundaries here In the United States. The opportunity to “push herself and be pushed,” as she explained, is something her path has taught her, adding not only substance to her work but a broader artistic perspective.

​Another source of that perspective is the opportunity that a concert artist with Karg’s success has had to put to good use all of that Lieder her work in Salzberg added to her repertoire. With recital engagements around the world as plentiful as opera roles, Karg revels in the opportunity to cultivate her own program and explore the intimacy that Lieder and art song invite. For her, exploring this more intimate side of her music is as important as opera. "Because I do so many different things, I don’t feel trapped in the music business," Karg explained. "After a long period of opera work, I do need to come back to the intimacy of art song—not only for the style of singing, but also because the intellectual studies and research it offers are very important for me as an artist.”

With art song Karg explained that an artist is afforded more room for their own creativity and individuality, more time to spend on the nuance inherent in the score, more time for study of the art of music making. “I love to sit in the middle of (a pile of) scores until late into the night to “compose” a recital program. And together with the pianist, I can spend the time I want and need,” time to cultivate the perspective her work with Heiner Hopfner and her subsequent path have taught her is vitally important in music.

This season, Karg returns to Chicago in performances so varied they reflect her vastly diverse schedule and the demand she enjoys as an artist. To enormous praise, she recently sang under the baton of conductor Jaap van Zweden leading the Chicago Symphony Orchestra in a November program featuring Brahms’ epic Requiem. She’ll return this December in a brand new production of Mozart’s The Magic Flute. For Karg, a brand new production of Mozart’s last opera—and one that she’s spent so much of her career with—is an opportunity to, for the first time, originate a role she's known intimately for the majority of her professional career. Her enthusiasm at the prospect is somewhat like the anticipation of seeing an old friend with fresh new eyes. “After all these years: it’s my first new production of Magic Flute,'" she told me. "I (sang) the role so many times in Munich, Frankfurt, Hamburg, Stockholm and London, but never my own Pamina! So, I’m very excited to discover Pamina."

​Chicagoans will be excited to discover more about Christiane Karg in January when she and other Lyric Opera artists pull back the curtain, if you will, in Harris Theater’s innovative and engaging concert series, Beyond the Opera. The unique cabaret-style concert is a collaborative effort of Harris Theater for Music and Dance and Lyric Opera's Lyric Unlimited initiative. Its style is relaxed and designed to draw audiences in with the performers, comprised of internationally acclaimed artists like Karg alongside young emerging artists from The Patrick G. and Shirley W. Ryan Opera Center at Lyric Opera, all hailing from Lyric Opera's current performing season. Artists select their own programs, and the music can span from the worlds of opera, jazz, Broadway and the American Songbook. Audiences get an up-close-and-personal look at singers like Karg, who may seem so distant on the opera stage that they become inaccessible, something Beyond the Opera aims to change.

All audience members get an opportunity to hear world class artists in programs that shed more light on who they are, an intimate picture of the person behind the music. Some audience members are even invited to enjoy the performance seated at café tables and choral risers right there on the Harris Theater stage.

For Karg, an artist whose path found her performing diverse music to diverse audiences from the very start, Beyond the Aria is just what the doctor ordered to introduce new audiences to the milieu of opera. She'd heard about the series, and after attending one concert  she was hooked. "Last year I went to one of the Beyond the Aria concerts and I loved it. I like unusual spaces and repertoire. In my hometown I have (had) my own chamber concert series for three years now. There is no concert hall and so we need to be very creative to find new places to perform, churches, barns, even gardens. You can be very inventive when you have to be." And for her, the kind of inventiveness that Beyond the Aria represents is just what opera needs to entice new audiences to open up to its treasures.

​"I think it is very important to show that opera is or can be for everyone," she insisted. "In my opinion the biggest problem is that people just don’t know (the genre)." For Karg, if you can create a forum that simply introduces new people to the art form, it’s a win for the art form. And she's all in when it comes making that happen. "If parents don’t go to opera, how can the children know if they like it or not?" she explained. "Often people think opera and theater is too expensive and just for a certain (audiences). If they can come as they are, wear what they want, having a chat with friends and having a nice picnic in the garden, I’m very happy to perform. We can reach many more people (that way) than in one single (traditional opera) performance." And says Karg, when people experience that kind of unconventional exposure to the beauties inherent in the music, pulling back the veil and veneer of the grand and austere opera hall becomes easy, opening more and more audiences to the prospect of exploring the beauties an opera performance has to offer everyone within earshot.

Christine Karg sings Pamina in Lyric Opera of Chicago's new production of The Magic Flute December 10 through January 27, and she performs in Harris Theater's Beyond the Aria series on January 19, 2017. Visit lyricopera.org and harristheaterchicago.org, respectively for tickets or more details. 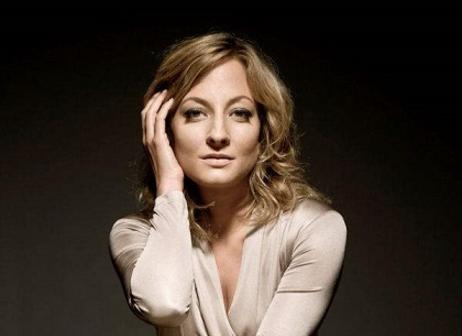 A luminary artist with a brilliant career, Karg takes the Harris Theater stage this winter in a unique and revealing, intimate concert format that draws in audiences to experience operatic artists away from the opera house and the formality that keeps them at a distance.