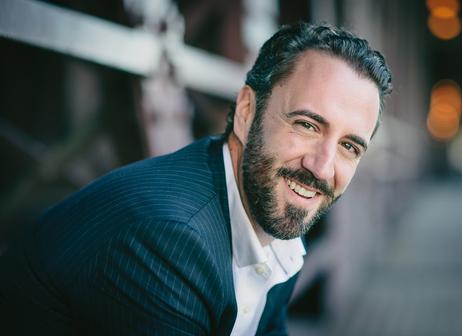 His warm and weighty tone has called many of the world’s major opera houses home. And of the various formidable roles he has sung in those homes, he has made each of them his own. Hailed as an artist of great sensitivity and a tone that is “unfailingly attractive” (OperaNews), bass-baritone Christian Van Horn has cut his artistic teeth on the war-horse arias in the industry, not the least of which is Narbal of Hector Berlioz’ epic work, Les Troyens (The Trojans). Van Horn is currently in residence at Lyric Opera this December for a new production of the work.

But also this December, van Horn will shift gears a bit and apply that warm, expressive tone to the tender art song genre, when he takes the stage in the winter installment of the Collaborative Arts Institute of Chicago’s popular Lieder Lounge—a series that promotes the treasures of salon-style vocal recitals. I was able to glean some insight into Van Horn’s approach to the salon-style arena, arguably an animal of a different species.

Q: Tell me about the attraction to art song for an artist with such a demanding operatic schedule and what elements it adds to your repertoire.

A: For 12 years now I have had the crutch of distance between me and the audience.  I have had sets, costumes, wigs, orchestra, sopranos and tenors to share the glare of the public.  There is some element of safety in all these things surrounding a singer.  I guess I just wanted to remove all those barriers and really connect on a much more intimate level.  Art song gives me a chance to tell a whole story.  So often when I am singing opera, my character just comes in and comments on a bit of the drama—he stays on the fringe of the central conflicts.  I am really attracted to the idea of telling stories in their entirety. Really, I just want to find out if I can do it.

Q: The impact of art song study on young artists and their development is arguably immeasurable. How does the concentrated study of art song at the earliest stage in a student-artists’ career impact their musical and performance aesthetic?

A: Art song is paramount to a young singer.  My entire first year of study was spent singing Schubert songs... literally.  My teacher would not let me sing anything else.  He said when I sang them better than anyone else I could move on to a very simple aria.  I hated it at the time because I really wanted to sing Puccini and Verdi!  I had the idea that I could just skip over Mozart as well and go right to the big boy stuff.  My teacher was there to bring me back to reality.  Schubert, Schubert, Schubert for an entire year, then a small amount of Mozart.  Living with these songs and living with the text laid the strongest foundation to begin to develop as an artist.  And in a lot of ways I don’t think I am an artist yet.  I would more likely be considered a singer right now.  I hope moving into recitals and art songs can help me further develop.

Q: Tell me about your program this winter at CAIC?   How did you derive it and is there a musical focus of any kind?

A: My program, while still in flux, will be very traditional in a sense…There will be Mozart for sure, Wolf, Poulenc and a great set of Rorem songs called Flight for Heaven that I am absolutely in love with. It’s so rare that a song cycle is written for Bass-baritone; I was immediately drawn to it. It so often seems that great repertoire was written for mostly baritones and mezzo-sopranos.

Q: The intimacy inherent in lieder and art song performance is something that when translated to the operatic stage can be remarkably incredible, something you have been able to do quite successfully in your career on stage. Dynamic ranges necessary in smaller, more intimate spaces work with the artist more kindly to that end. How does an artist communicate the intimacy inherent in a salon style Lieder concert just as effectively before a packed Civic Opera House audience?

A: When it comes to singing to a packed opera house you have to believe in your heart that the last person sitting in the back can see all the subtle gestures of your face. Now- we know that’s not reality.  The maestro is 20 feet away and the public seems to go on forever; but, it’s imperative that you believe they can all see you perfectly.  The best performers (and I am far from one of them) are those that truly believe what’s happening in the show. Method actors do the same thing. It’s that Stanislavski method of emotional memory that makes the drama real…I am well aware of the audience and the Maestro and the lights and costumes etc.  I am hoping to get a little closer to becoming the other kind of performer.  I think intimacy of recitals and art song help me get there.  You just can not fake it when the audience is so close, and there is no booming orchestra or costume and wig to hide behind.

Q: You’ll be returning to Lyric Opera this winter in the role of Escamillo in Bizet’s Carmen, probably one of the most well known (and hummed) operas in the cannon. I’ve always wanted to know if artists approach an opera or aria differently when it’s so well known the approach they might take with more obscure works, which create fewer expectations for the listening public. Does this make a difference at all in your preparation for the role?

A: My basic prep for a role doesn’t really change from one to the next. If something I am about to do (like Escamillo) is really famous and everyone and their brother has recorded it then, yes, I have a lot more source material to go to. The Toreador song is, obviously, well known; and, as someone who has sung Zuniga in umpteen productions, I am lucky to have a lot of first hand experience watching people sing it live.  A recording is deceiving in that you can do take after take until it’s the best version.  A live performance of Escamillo is a completely different beast. The Toreador song is too high for basses and too low for baritones.  I have witnessed good successes and crash and burns.  The good Escamillos stay in control from the very first rehearsal and focus on the singing rather than the flashy part of Escamillo's character.  Escamillo is a big success when it is sung well.  You can jump on all the tables you want and cartwheel across the stage, but if the aria isn’t sung well you are sunk.  My vocal prep for Escamillo was focusing on where singers go wrong in it and ironing out those things first.  To be sure, it’s not for kids.

Q: What is your biggest indulgence away from music and why?

A: I’m sure my home in Virginia is a big indulgence.  My family and I spend most of the year on the road, so very often our house sits empty. That is surely a big indulgence, but we find that this crazy singer life is made easier when you have a beautiful warm home to reset a bit between jobs.

Q: If you could add another 12 hours to every day without tiring, what would you do with them?

A: I think that I am a great user of time.  I have no trouble being up at 6 a.m. to get my work done.  I have my checklists and I get right to them…I don’t waste a lot of time in my day, so truly if I had 12 extra hours, I might like to find more time to relax with my son and wife…see friends and family more. I have been painting (watercolor and acrylics) for years and might like more time to commit to that.

You can hear Christian Van Horn when he takes the stage in the Collaborative Arts Institute of Chicago’s Winter Lieder Lounge February 25, 2017 (caichicago.org) and Lyric Opera’s new production of Les Troyens on stage now at Civic Opera House (lyricopera.org) through December 3.