This spring, like those of the past five, Chicago audiences will be fortunate enough to hear an art form that has enjoyed something of a true renaissance in recent years. The professional performance of sacred music in a concert setting is something that Soli Deo Gloria (Glory to God Alone) has revived quite brilliantly in the Windy City since its launch of the Chicago Bach Project in 2011. Audiences hearing Bach’s most revered, sacred works (his Passions and Mass in B-minor) understand the musical grandeur associated with such experiences, certainly. But to hear artists dedicated to the performance of these works performed in a truly sacred context is something quite special, and each Lenten season since its launch, Soli Deo Gloria's (SDG) founding artistic director, John Nelson, and the Chicago Bach Project Orchestra and Choir have given audiences a crystalline picture of the emotive weight and worth so often missed by musicologists because of their inherent musical architecture—perhaps akin to walking into a grand basilica to observe its structure and view its ornate design yet stopping short of praying.

I was fortunate enough to get some insight into the work behind SDG and the Chicago Bach Project’s much anticipated 2016 installment, Bach’s Mass in B-Minor. Maestro Nelson and SDG Music Foundation president and CEO Joseph LoSchiavo make it quite clear, it’s more than just music that’s being imparted to their audiences, and perhaps that’s why they keep coming back year after year for an immutable experience that’s really quite like no other on the city’s massive concert calendar.

For you, Bach’s sacred works are clearly more than just sublime compositional achievements, looking beyond even the phrasing and musical “punctuation,” if you will, to communicate a musical intent that, outside of the text, isn’t necessarily often communicated. How do you get “behind the music” to impart such poignant weight as Bach conveys in a work like the Mass in B-Minor?

Nelson: Unfortunately, most performances of these works nowadays are given with a "faithfulness" to historical authenticity—proper this, proper that, proper numbers of performers, proper instruments. For me, true authenticity is finding the spiritual essence of the work first, then seeking to be faithful to the style as a secondary goal. This is especially true of Bach’s Passions that were written for the darkest night of the liturgical calendar. That is why we perform these works during the Lenten season and try to transform Harris Theater into a sacred space.

Bach’s Mass is arguably considered the pinnacle of achievement in Western music. Is there a balance that has to be achieved between technique, musicianship and poetry (or even composer’s intent) to do a work like the Mass in B-Minor justice?

Nelson: Oh my! You have hit on the most challenging aspect. Because it is generally considered the pinnacle of Western music, there is a terrible weight of responsibility for the performers to do it justice. Fortunately, I have lived with this music all of my life and have grown in my confidence to interpret it. Technically, it is by far the most challenging work written up to that time in history. One has to wait until Beethoven's Missa Solemnis to find anything comparable. Matters of technique, musicianship, and poetry are pretty much equally balanced. If any is weaker than the others, they all suffer. Fortunately, the high quality of performers we have engaged should be up to the task. As far as the composer's intent is concerned, that is a tough one to answer. Precious little of Bach’s own words has come down to us. But the power, brilliance, and depth of his music, unsurpassed to this day, speak volumes about his intent.

Tell me about the new artists Chicago Bach Project is working with in the new 2016 performance. What are some of the highlights listeners will see in the new roster of artists?

Nelson: All the soloists are new to the March 11 concert. They were chosen either by audition or previous collaborations. Kathryn Lewek came out of nowhere several years ago to audition for me in New York and blew my socks off. She has sung Mozart’s Queen of the Night (from The Magic Flute) in practically every major opera house and is going to make her debut at the Lyric next year in this role. Kathryn and I have collaborated many times now, and I am proud to bring her to the Chicago Bach Project. The other singer with whom I have had the pleasure of working is Daniel Okulitch, in Mozart's The Marriage of Figaro at the Santa Fe Opera, and will conduct him again in Santa Fe this summer in Don Giovanni. He is one of the world's great bass-baritones. The other two soloists, Margaret Lattimore and John McVeigh, sing regularly at the Met, but they are new to me. I’m looking forward to working with these artists of superior quality.

The foundation has been commissioning new sacred works for years now. In recent years, however, there has been a distinct uptick in the performance of sacred classical music by ensembles throughout the world. Audiences seem to be well engaged in a resurgence of popularity of the art form. Is this something you attribute to the new works that have surfaced on the concert landscape over the past few decades?

Nelson: Back in the founding days of the SDG Music Foundation, there was a distinct absence of new sacred works in the repertoire. The 20th century had not been kind to the form. Only a few permanent works, such as Poulenc's Gloria, Stravinsky's Symphony of Psalms, and Britten's War Requiem, remain staples. Much of that has changed in the 21st century with composers such as Arvo Part, Krystoph Penderecki, and James MacMillan. Part of that is the result of the Berlin Wall coming down and constrained composers celebrating their freedom, and part may be from a hunger for a more spiritual presence in our increasingly secular world. In any case, it is to be celebrated.

Tell me about Laudate, commissioned by SDG Music Foundation for its Psalms Project. What can listeners expect from the new work by John Metcalf?

LoSchiavo: As a body of literature, the Psalms are pretty much unrivaled in their capacity to articulate the depth of human spiritual experience, and there seem to be few, if any, cultural impediments to their impact. In the SDG Psalms Project, we invited 15 of the best contemporary composers to explore this depth, each in his or her own way.  John Metcalf expressed his interpretation eloquently:

“I wanted to focus on the mystery of praise, the mysteriousness of life and a universe that’s expanding at a thousand miles per second, the limitless and impossibility of understanding what an amazing and extraordinary world we live in, however dark it may sometimes seem.”

How does it relate, if at all, programmatically to the Bach Mass?

LoSchiavo: I think the composer’s own words address his spiritual affinity to the Bach Mass.  Musically, Metcalf’s Laudate elegantly bridges the traditional and the contemporary.  Also, of the 15 Psalms Project compositions, Laudate is the only one set to a Latin text, so it spoke to us as the perfect partner for the Mass in B-Minor.

Maestro Nelson and The Chicago Bach Project will present Bach's monumental Mass in B-Minor at Harris Theater for Music and Dance March 11, 2016. Visit harristheaterchicago.org for tickets of for more details. 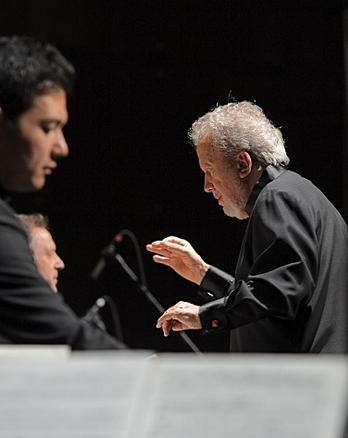