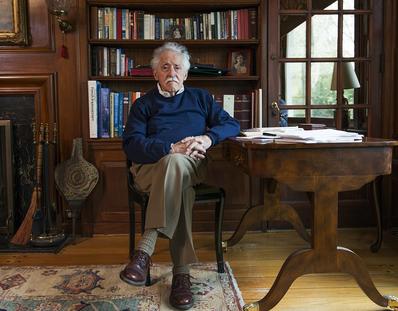 Because I’m from the world of theater and because I’m about to interview an actor, I want to ask questions that will relate me to him, a common bond. I don’t want it to become just another interview for either of us. But I’m not quite sure how much either of us wants to talk about science, the profession of Nussbaum’s next character, Albert Einstein, or if science even qualifies as a racket. Maybe that doesn’t matter, and we can just focus on acting and what Nussbaum does so well.

Although scientists have indeed had to hustle in their own way to achieve acceptance and thus, validation. Einstein had to gain acceptance more because of his Jewish ancestry than his profession. Because during the first part of the 20th century, fascination with the seemingly limitless universe made science—and especially astronomy—appealing, if not downright interesting. It was a good time to be in the science racket.

Probably no scientist stirred more interest than Albert Einstein. Even today, if science were to elect a definitive iconic figure, it would be Albert Einstein. Hell, if genius itself had an iconic figure, it would be Einstein. Not merely because of his accomplishments but because of the man of science himself. Maybe because he perfected the look so well: a messy mane of gray hair, walrus mustache, tired but kind eyes; he became the quintessential absent-minded professor, too brilliant to waste too much time grooming.

He also became a celebrity. Theoretical physicists don’t often enjoy the kind of fame normally reserved for movie stars and sports heroes, but Einstein—Jewish, born in Germany, and forced to make his home in the United States when Hitler came to power in 1933—so rapidly sculpted our understanding of physics that, combined with that approachable look, Americans (and the world) found him irresistible…and fascinating.

Like all celebrities, the world didn’t simply want him to explain his Theory of Relativity (the most famous mathematical equation ever) but they wanted him to talk about his personal life, too.

That’s where things get muddy. Oh, there are plenty of books, movies and even plays that delve into the life of this genius who never bothered trying to be misunderstood, but any perusal of home life reveals more facts than anecdotes. So, when playwright Mark St. Germain decided to make Einstein the subject of his new play, Relativity (receiving its Chicago premiere at Skokie’s Northlight Theatre this spring), one wonders what fresh theory he might shed light upon.

The controversial one, of course: it’s well known and documented that Einstein had exactly two wives and two sons. That is, until 1986 when previously lost correspondences between his first wife, Maric and Einstein revealed a daughter, Lieserl, born January, 1902 and never mentioned again after 1904. This is exactly the focus of St. Germain’s play.

The script begins many years later, on December 9, 1945. Einstein is 66 years old; young enough and sharp enough to produce more brilliance but, of course, the clock is ticking. Enter Margaret, a young, attractive reporter interested more in the family man than the man of science. Well versed on all of it. Highly intelligent, respectful but still needing an interview, she charms Einstein just enough to get the information she wants.

It’s an intriguing script. The only other character in the play is Helen, the housekeeper, self-appointed custodian of Einstein’s time, she’s endlessly eager to get rid of anything distracting the genius from his work (like attractive reporters).

The biggest question might be tackling the role of Einstein. Those are pretty big shoes to fill, not just because of his iconic status but because we already have such a clear—even clichéd—concept of how Einstein looks and presumably acts. It would be easy for a weak actor to fall into caricature; it might even work, in an ironic way. But this script is straightforward; Einstein needs to be authentic.

That’s where Chicago actor Mike Nussbaum comes in. For anyone that regularly indulges Chicago theater, Mike Nussbaum might qualify as the quintessential Chicago actor, a title Nussbaum would probably resist—or even hate. But at 94 years of age, he is both the oldest working actor in Actor’s Equity (the stage actor’s union) and the one actor I’ve seen most often onstage in the past five years.

Nussbaum loves acting but he doesn’t particularly care for that age part getting brought up all time. That’s natural; one wants to simply be assessed on merits without the qualifiers. It might be best to say that Nussbaum accomplishes complicated and verbose roles…period. I don’t know how quickly any actor would jump at the multi-dimensional role of the Colonel in Noah Haidle’s Smokefall, at Goodman (2013 and remounted in 2014); the shrewd furniture appraiser in Timeline’s production of Arthur Miller’s The Price (2015); or a similar yet subtly different art appraiser in Timeline’s production of Bakersfield Mist.

“Not in this particular case. I’ve done Freud,” Nussbaum insists. “I’ve done other historical figures, and it was important to me to use an accent but to create the character out of what the playwright has given me. I’m doing the Einstein that is written in the script.”

And that’s an interesting one. Witty and flirtatious, much of what Einstein says in Relativity reveals a master of the one-line zinger as much as one of quantum physics. Without losing the scientist, St. Germain does a nice job of giving us the person of Einstein.

Nussbaum has had a few opportunities to be the first person to breath life into some famous characters. He began pursuing acting as a profession in the 1970s—a golden era when the Chicago theater scene was just starting to develop in the very distinct way that would make it world famous a decade later. It’s also the time when Nussbaum met up with a newbie playwright, David Mamet. Mamet could see that the gritty Chicagoan in Nussbaum was no act; Nussbaum would originate roles in several Mamet plays, most notably the character of Teach in American Buffalo and Aaronow in Glengarry Glen Ross.

“Mamet always used to say, ‘If you’re in trouble, play the words; trust the words,” notes Nussbaum. “And for me, that is the motif from which I have always worked.”

But what about age? Mr. Nussbaum seems comfortable chatting with me, maybe because I haven’t gone there. It seems like the ultimate cliché when interviewing an actor who chooses to keep working well past retirement. Part of me wants to bring it up along with the struggles to keep going at it. But age doesn’t seem to deter Nussbaum; he admits to being too old for some of the roles he’s actually played recently.

And that’s also part of the challenge for Relativity. The Einstein we see is 66 years old, compared to Nussbaum’s 94. I realize that Nussbaum doesn’t need to be categorized in that way. As long as his voice is strong—which it is—and the words are there—which they are—age does not need to be a definer. With the exception of his need for a cane, Nussbaum adapts quite easily. And there, Einstein can accommodate Nussbaum. “I adapt to the reality: I use a cane, so Einstein will be using a cane.”

That’s fair, if sobering. But its also amazing: I’m talking to a man of Nussbaum’s who keeps looking to his next project. Because that’s Mike Nussbaum’s racket. Many get worn out, but Nussbaum stays fresh. Every night is new. Maybe that’s the key for him, and maybe that’s why he always focused more on theater than film.

“I always spend five minutes before curtain listening to the audience. It reminds me that these are people not in the play, and it juices me.”

That give and take of live theater that infuses actors half the age of Mike Nussbaum who can only hope that in 40 years or so they can get to a point where they’re still telling the world what they’re about to do. Until then, we’ll keep waiting to see what Nussbaum does next.

Mike Nussbaum stars in Northlight Theatre’s production of  Relativity at North Shore Center for the Performing Arts in Skokie from May 11 through June 18.