Singer Shannon McNally’s career has been steeped in the earthiest of toots recipes that blend influences from country, blues and soul and shed all pretense along the way.

Maybe it was her time pounding the musical pavement in Paris or her years stomping stages for artists like Stevie Nicks and John Mellencamp that taught her the unique sense of authenticity so prevalent in her music, but whatever it is, she’s the real deal.

Her most recent album, Black Irish, is a revelation in the sense that it is a personal reflection of some of McNally’s deepest connections in life and understanding about who she is as an artist. I got an opportunity to sit down with the singer and pose a few questions before she prepares to come to Chicago with songs from that new album.

Q. Your musical inspirations seem to span from that gritty earth of artists that aren’t afraid to buck convention and sing from that well deep down beyond the place many musician fear to tread…from Willie Nelson, to Muddy Waters to Emmylou Harris, Bill Withers and Mavis Staples. What is it about these artists that you connect with so easily?

A. I think that particularly for the artists mentioned…that singing from a place of deep consciousness was and remains their natural resting place. All of the (these artists) were, generationally (sic) speaking, not overwhelmed with information, technology and electromagnetic frequencies. I would think that that allowed them a deeper calm than what life has become. They were all bold existentialists who thought beyond their settings. Perhaps that is our point of connection.

Q. You were going through a pretty tough time during the maturation process of tracks for Black Irish. Was the project cathartic for getting through that period in your life?

​A. Life is tough. Those really big life transitions like death of a loved one or divorces have a way of clearing the lens through which you see life. An artist's life is about sensing, internalizing and communicating. So yes, having the opportunity to process those intense emotions through my art is most definitely cathartic. Making this record allowed me to release those pains, which is in turn growth. Everyday I'm grateful that I'm an artist. I would wish it for everyone.

Q. There’s a real poetry and emotional accessibility evident in your music that’s seemingly always been there. Is that the case? Were you always a deep thinker as a young child?

​A. Yes. My mother told me that I didn't speak until I was closer to three. She wondered what I was thinking. I don't know that I'd always call it 'thinking.' Sometimes it's more like feeling or sensing. I have a very robust sense of 'feel' and, at times, need to protect myself from the relentlessness of it, with isolation meditation and music.

Q. You admit that it was a J.J. Cale album that “saved (you) from the Debbie Gibson era.” What was it about the roots style that pulled a 12 year old girl away from mainstream pop?

A. Well I think that little girls are pretty highly misunderstood and underestimated in our culture. It's often a kind of pejorative to tell someone they act like a 'little girl,' which I take great offense at now, later in life and particularly as a mother of a little girl. They are inundated with glitter, shiny, pink, shimmery pop and told over and over again that they like it, reminded to be 'nice', 'helpful' and to smile. Never really given a chance to split the difference between their inner darkness and inner light, which we all have. I watch my daughter respond to songs, all kinds of songs. Given a wide variety of musical options, her taste is all over the map. Though she can hear a hit in just a few bars. I remember hearing J.J. Cale at 12 and being instantly comfortable in it. It struck me as having humor, not the slapstick kind but the kind that comes from quiet observation of people. Stylistically, at the time Tom Petty was also huge. Both J.J. and Petty kind of gave me permission to stand my ground and not have to fall all over my self and beg for approval by constantly smiling.

Q. You pay tribute to Cale’s influence in your new album with “Low Rider.” Tell me about making that track. Did it feel like you’d come full circle at all?

​A. Yes. He had a sense of self-ownership. He was just programmed that way. I've never recorded any of his songs before, though I spent a lot of time internalizing his approach. Most people butcher his songs by overplaying them, pushing too hard. I wouldn't have done a song of his song if somehow I didn't know that I'd do it justice.

Q. Tell me about the making of “Banshee Moan” and how it connects you with the more vocal women’s movement we’re seeing take shape today?

A. There is a magnificent surfacing of repressed female energy bubbling up right now. It is push back against the extreme arrogance and toxicity of our profoundly misogynistic culture. I can't NOT address it anymore. It's the big gorgeous white elephant in the room. A banshee is a female spirit come to take the soul of the dying to the next world, and it's coming for that part of male dominance that is so destructive to all of life.

Q. What is it about home you love the most when you get back there after a long spate of concerts on the road?

A. The quiet and the stillness. I love my garden, my animals and cooking for my family. I like to straighten, order and cull my stuff as well. It's a kind of creative relief.

Q. If music had not become the course for your life, what would you be doing today?

​A. I'm drawn to big picture work. I'd like to plan a Utopian town, maybe be a midwife or study animals that use sonar like whales, dolphins and bats.

Q. Tell me about what you consider a guilty pleasure you indulge in while on the road?

A. I feel free, free to be a complete artist, temporarily relieved of the rest of my responsibilities—particularly when I'm on stage. 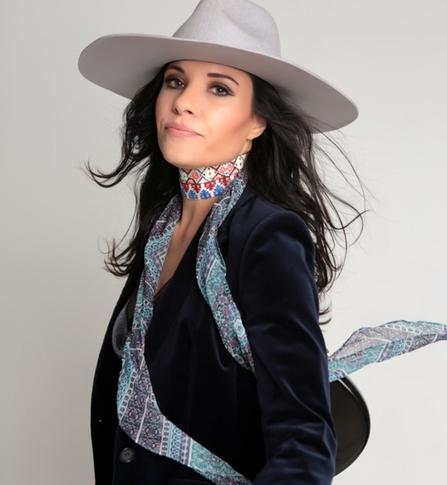