Tenor and Hyde Park native Paul Appleby is something of a homebody, it seems. Yet the difficult hustle and bustle of an incredibly busy concert calendar, singing in the world’s leading opera centers and collaborating with some of the greatest conductors on the orchestral stage today, has not dimmed his love of the art form one iota. What it has done is give him an appreciation for the ability to take that art he is so passionate about and bring it home to family, friends and familiar spaces, which is exactly what he’ll do this spring when he performs with the Chicago Symphony Orchestra; a stellar cadre of vocalists (including mezzo-soprano Elizabeth DeShong and tenor Nicholas Phan); and the always splendid Chicago Symphony Choir in a program of nothing less than Schubert’s epic  Mass in E-Flat Major. The Schubert—among Appleby’s favorite composers—will make a fitting selection for an artist who is considered among the most expressive and nuanced of his generation.

Receiving the bulk of his professional tutelage under the auspices of the prestigious Lindemann Young Artist Program at The Met and returning there (after bubbling up through the ranks) in one of his most memorable performances, as Tom Rakewell in Stravinsky’s masterpiece, The Rake’s Progress, Appleby’s spring CSO appearance under the baton of Riccardo Muti brings the tenor full circle in many ways. And yet he’s nowhere near anything resembling a plateau.

My opportunity to speak with him amid his busy rehearsal schedule this winter yielded bona fide passion for his art form, a healthy disdain for the machinations of an active vocal career and a few genuine surprises here and there:

How important was your participation in the Metropolitan Opera’s Lindemann Young Artist Program to your own development after college?

It is difficult for me to imagine my career today without having been in the Met’s Lindemann program—it gave me the education and opportunities that made all the difference.  The educational component of the Met program is unmatched by the young artist program of any other opera company in the world, but the greatest lessons I learned from my time in Lindemann were the cold, hard facts of life as an opera singer.  It is incredibly fun and fulfilling when things are going your way, but it takes a huge commitment to maintain steady, healthy growth and success as an opera singer and to learn how to navigate the inevitable bumps in the road of a complicated art form and industry.  The Met program was a kind of crucible: “Yeah we know you’re talented, but if you’re going to make it in this business this is what it actually takes.” It was hard work to come out with my voice and mental health in tact, but I am deeply grateful for the experience.

Your concert with Steven Blier and the New York Festival of Song (NYFOS), exploring Schubert and The Beatles, must have been a fun project. What was it like working with Blier on that?

Of all the recitals and art song programs I have ever given (too many to count), the Schubert and Beatles program with NYFOS was the single most fun of my life. Chauvinist songster that I am, Schubert is probably my favorite composer based on his song catalogue alone.  The great Steve Blier once paid me a high compliment when he told me I am a genuine “Schubert tenor,” to which I somewhat cheekily responded that I thought of myself more as a Paul Simon tenor.  The point I was trying to make is that the reason I love Schubert so deeply is that his songs have always spoken to me with the same pleasure and meaningfulness as the music I first fell in love with as a kid, and the Beatles were certainly a huge part of that music.  So it seemed natural to pair Schubert and Beatles songs on the same program and it really, surprisingly, worked. We paired a Schubert song with a Beatles song that had something in common in their words, and then Steve and I came up with arrangements (mostly Steve) of the Beatles songs for voice and piano that employed some Schubertian methods.  The most successful was paring Du liebst mich nicht—a jilted lover mourns as Schubert shifts seamlessly between major and minor modes as happy memories and present pain intermingle—with “For No One.”  I was always struck by the pleasantness of Paul McCartney’s music in contrast to the sad lyrics, so we came up with an arrangement of the Revolver classic that alternated between major and minor according to the text.  I was so proud of the success of our experiment because it illustrated the argument that I make to entice my friends to listen to more classical music: it’s just music and it is awesome in all the same ways that the pop music you love is.

You’ll perform with Riccardo Muti and the Chicago Symphony Orchestra this March in a concert featuring Schubert’s monumental Mass in E-Flat Major (D. 950). Do you have a history with the Schubert?

(As I mentioned), Schubert is my favorite composer (or at least in my personal top five: Bach, Schubert, Berg, John Adams and Harold Meltzer—what can I say…I have Teuto-American tastes) because his writing—and especially his songs—is everything that I like about music.  It is simultaneously idiosyncratic and universal, and this is the paradox of all great art: its authenticity, that which makes it so universally popular, is a function of its uncompromising individuality, imperfections and all. When I gave the Alice Tully debut recital in 2010 at the Lincoln Center, I saw it as my coming out party as a professional singer. I felt that Schubert was an essential part of my work as a singer, so I chose Die Schöne Müllerin. I love the piece and had something to say about it, and my performance was meant as a declaration of artistic identity. You are what you sing.

Working with prominent conductors will be a continuing highlight of your season, it seems. In addition to the March performance with Maestro Muti, you’ll also collaborate with Gustavo Dudamel and the Los Angeles Philharmonic. How does working with some of the world’s most elite conductors impact the depth of your own artistry?

When I was just starting out as a professional musician, I didn’t quite understand what the big fuss about conductors was. They are just musicians like me trying their best to make beautiful and meaningful music so why do they deserve so much adulation and money? But getting to work with truly great conductors such as Dudamel, and now Maestro Muti, has given me an example of what the work of being a musician is really about, and the answer to why we bother to work so hard to make excellent music. All artists by definition have a medium, a discipline, a technical process through which they channel ideas. Painters, filmmakers, novelists and so on, must master a technique in order to express an idea clearly, but once they achieve that mastery, the idea they want to express is woven indivisibly into the materials of their art form. The artist and her technique become one. Good conductors are good because they have both a unique and rare neurological gift to hear music in a certain way and the technical and leadership skills to articulate a musical vision and get their orchestras on board with it. Great conductors are great because they understand how this process of music making is one of the greatest tools we have as a species to give voice to deep, unutterable truths, to infuse music and music-making with a vision of humanity (including our politics), because it is made by and for people in a community.  Great conductors are great teachers because they can demonstrate how attending diligently and passionately to the rigors of technical mastery are essential to making art that matters. Music isn’t notional or theoretical. It is a concrete physical substance that has the power to articulate humanist values and bind a community together.

Speaking of illustrious conductors, you’ve collaborated frequently over the years with Manfred Honeck. Tell me about your work with Maestro Honeck.

Maestro Honeck is one of the most musical conductors I’ve worked with. Whenever I perform with him, I experience, first and foremost, the joy of music-making because he puts his deep knowledge of the (repertoire) he performs at the service of beauty and fun. When I have sung pieces such as Haydn’s Die Schöpfung or Handel’s Messiah under his baton, these old, oft-performed pieces become new delights. His own musical training and pedigree puts him in the lineage of the great Habsburg musical tradition going back to the First Viennese School leading up through the centuries in the hands of such conducting greats as Furtwängler, Karajan, Reiner and Solti. So I feel a real sense of privilege to get to work with him on the (repertoire) on which he has such a deeply informed perspective—one of my dreams is to do Beethoven’s Christus am Ölberge with him—but I would work with him on anything because he brings his profound musicality and joy with him no matter what he is working on.

What are you looking forward to most about your hometown performance here in Chicago?

I was born in Hyde Park and lived in Beverly until moving to South Bend, IN at the age of 10 when my dad left the University of Chicago to become a professor at the University of Notre Dame.  So I am disappointed that the White Sox season won’t have started yet when I sing with the CSO in March. But maybe I’ll come to town early, so I can catch the South Side St. Patrick’s Day parade down on Western—I lived at 111th St. and was a parishioner at St. Cajetan’s, so the parade was a big deal. I, sadly, have not had many opportunities to sing in Chicago in my career, and never at the CSO or with the Lyric Opera, so getting to invite my parents from South Bend—as well as aunts, uncles, cousins and family friends from Chicagoland—to see me sing with the best orchestra in the country is simply the coolest.  They may not all be classical music buffs, but they know that performing with the CSO is a mark of excellence, so I am grateful for this opportunity to impress my family.

If music had not been on your radar early on, what career do you think you might have pursued?

I honestly do not know the answer to this question. I’ll tell you a little secret: I would totally sing for free. As far as the singing goes, it’s too fun to count as work. The extensive traveling the career involves is hard on my family, and there are a lot of tedious tasks that come with the job, like dealing with international taxes as an independent contractor, setting up an apartment in foreign cities multiple times a year...I guess I sing for free and get paid for all the other stuff this career entails. But no other vocation has called to me even remotely the way singing has, so I guess I’ll deal with this question when I have to—which is hopefully never.

What is your biggest guilty pleasure (away from the concert stage)?

Paul Appleby will perform with the Chicago Symphony Orchestra under the baton of music director Riccardo Muti and a other vocalists in Schubert’s Mass in E-flat Major March 22 through 24 at Symphony Center. Visit cso.org for tickets or for more details.

Acclaimed tenor and Hyde Park native Paul Appleby on debuting with the Chicago Symphony Orchestra and what it means to come full circle. 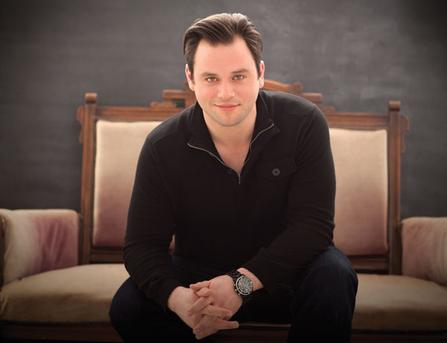