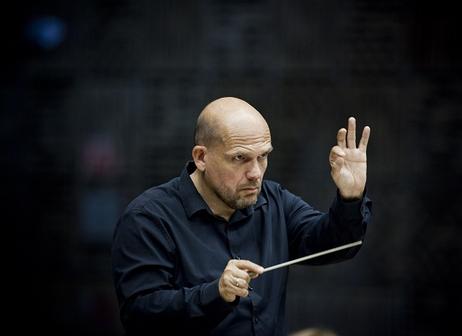 Conductor and music director designate of the New York Philharmonic Jaap van Zweden returns tonight to lead the Chicago Symphony Orchestra (CSO) in a subscription concert that will be repeated on November 11 and 12.  Jaap van Zweden leads a performance of Brahms’ A German Requiem featuring the CSO and Chicago Symphony Chorus (prepared by its music director, Duain Wolfe) as well as soprano Christiane Karg and baritone Michael Nagy in their CSO debuts. The program also includes Mozart’s Masonic Funeral Music and the Prelude and Liebestod from Wagner’s Tristan and Isolde.

The program opens with Mozart’s Masonic Funeral Music. The intensely powerful work was performed as a funeral processional and highlights dark sonorities for a group of low wind instruments including bassoons and clarinets. The introspective mood of the program continues with Wagner’s Prelude and Liebestod from the opera Tristan and Isolde. Completing the concert is Brahms’ choral masterwork, A German Requiem, which received its premiere on Good Friday, April 1868. Written following his mother’s death in 1865, the seven-movement work for chorus, orchestra and baritone and soprano soloists explores the transition from anxiety into comfort in the wake of death. Considered a sacred but non-liturgical work, Brahms derived the text for the work from the German Luther Bible in lieu of the standardized Latin text of the Roman Catholic Requiem mass.

One of today’s most sought-after conductors, Jaap van Zweden has appeared as a guest conductor with leading orchestras around the world. In January 2016, the New York Philharmonic named him their new music director starting with the 2018-19 season, and he will act as music director designate during the 2017-18 season. He currently holds positions as music director of both the Dallas Symphony Orchestra, a post he has held since 2008, and of the Hong Kong Philharmonic, since 2012.

Hailing from Feuchtwangen, Bavaria, Christiane Karg is one of Europe’s leading sopranos. She is a member of the ensemble of the Frankfurt Opera, where she is featured this season in the roles of Mélisande in Pelléas and Mélisande and as Adele in Die Fledermaus. Karg also made her debut at Lyric Opera of Chicago in the 2015/16 season in Mozart’s Le Nozze di Figaro, directed by Chicago Shakespeare Theater’s Barbara Gaines. She will return this season in the new Lyric Opera production of The Magic Flute. She’s twice been awarded the prestigious Echo Klassik prize—in 2010 for her debut Lied CD Verwandlung—Lieder eines Jahres, and again for her 2016 release of concert arias, Scene!

Acclaimed conductor Jaap van Zweden will lead the CSO and CSO Chorus in a robust concert of works by Brahms, Mozart and Wagner (photo courtesy of Symphony Center Presents).