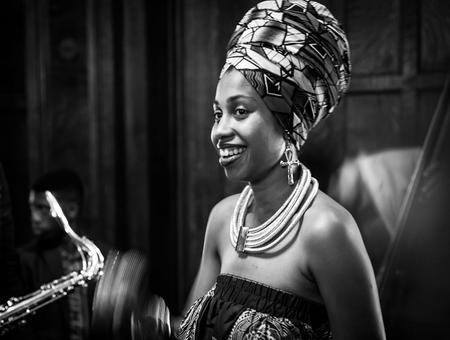 Since she first entered the New York scene in 2009, vocalist Jazzmeia Horn has steadily risen through the ranks of young, head-turning jazz musicians, performing in many of the Big Apple’s most storied clubs and earning a reputation as a rising star. On Friday, November 30, Horn makes her Chicago debut on the Jazz at the Logan series at UChicago.

In the last five years, Horn has become one of the most celebrated young vocalists. In 2013, she won the Sarah Vaughan International Vocal Jazz Competition, and in 2015 she received the top prize in the Thelonious Monk International Vocal Jazz Competition. She left the Los Angeles competition with a contract on the Concord label, and in 2017 she released her first album to critical acclaim.

On A Social Call, Horn staked out her place in vocal jazz, embracing the singing style of earlier divas such as Abbey Lincoln and Betty Carter, but fusing it with contemporarily relevant subject matter. A Social Call features covers of standards including Carter’s “Tight” and Bobby Timmons’ “Moanin’,” traditional and gospel songs like “Wade in the Water” and the ‘Black National Anthem,’ “Lift Every Voice and Sing,” as well as renditions of newer R&B hits like “I’m Goin’ Down.” Throughout the whole album, for which she earned her first Grammy nomination, and in performance, Horn uses her music to wrestle with contemporary injustices and issue a call for change.

​On November 30, Horn, joined by pianist Victor Gould, bassist Barry Stephenson, and drummer Henry Conerway III, brings selections from her debut album as well as new original compositions. Before the show in the Logan Center Performance Hall, local emerging jazz artists Morgan Pirtle +3 can be heard in the Logan Café as part of Chicago Stage at the Logan, presented by the Jazz Institute of Chicago and the Reva and David Logan Center for the Arts. For more information or for tickets, call 773.702.ARTS (2787) or visit tickets.uchicago.edu.com.