Violinist Jennifer Koh and pianist Shai Wosner have come together to combine their personal and musical experiences in an innovative collaborative project titled Bridge to Beethoven that explores the impact and significance Beethoven has had on a culturally diverse group of composers and musicians. The recital series pairs Beethoven's Complete Violin Sonatas with works by composers of different ethnic lineage in four distinct programs featuring three works commissioned for the series by Vijay Iyer, Andrew Norman, and Anthony Cheung which serve as companion pieces to select sonatas, and Jörg Widmann’s Sommersonate.
“Shai and I created this project in order to integrate our personal interpretations of Beethoven alongside the unique perspectives of contemporary and diverse composers,” said Koh, “We hope that the synthesis all of these different voices will lead to compelling recitals and performances.”  For Mr. Wosner, the development of the series examines the music of Beethoven and the evolution of classical music through the present. “Beethoven was the first composer to write music in which the struggle of creativity is part of the piece,” Wosner said. “And Beethoven was the first composer to do that consistently, the idea of the creative process is very much in the forefront of a lot of today's music and these new composers are all wildly different and exciting examples of that."

Koh’s approach to the project focuses on the cultural and social effect of classical music. “I wanted to create a project that explores diversity in a compelling way, where people can engage with different cultural voices in a musical conversation,” she said. This project is about including a wide range of voices that takes all of us on a journey that illustrates the evolving nature of classical music.”

To develop new works that propelled the vision of Bridge to Beethoven, Jennifer Koh asked composers Norman, Iyer, and Cheung (all of whom she has worked with previously) to compose new works to act as companion pieces to the existing Beethoven violin sonatas. Wosner, who has previously worked with Mr. Widmann, introduced Sommersonate to the project.

Program I of the project, which will be performed this fall at Ravinia, is comprised of two sonatas: Op. 12, No. 1 in D Major and Op. 47, Kreutzer in A Major, and Vijay Iyer’s Bridgetower Fantasy, a work influenced by the Kreutzer Sonata. The Kreutzer Sonata was originally dedicated to George Bridgetower, a famous 18th-century Afro-European violinist who performed the premiere of the sonata with Beethoven. However, after an argument over what Beethoven construed as Bridgetower’s insult of a female acquaintance, Beethoven rededicated the sonata to Rudolphe Kreutzer. “My piece is a collection of imaginings about George Bridgetower,” Mr. Iyer said. “It is not programmatic, but it takes on an episodic character, assembled from contrasting fragments. I am grateful to Jenny and Shai for involving me in their beautiful, virtuosic music making.”

“The future of classical music lies in expanding our community by including the voices of artists from a vast array of backgrounds," noted Koh.  "Classical music might have originated in Western Europe but it remains a vital art form because of its ability to evolve and I believe the next chapter of this art form will be enriched by embracing  people from diverse traditions and cultures who bring their own rich histories to the art form and offer us a a renewed energy and imagination." 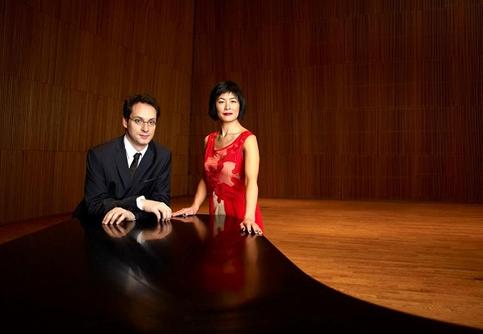