Harris Theater founding member and Trustee, Joan W. Harris was among the recipients of the 2013 National Medal of Arts awarded by President Barack Obama in the nation’s Capital, Monday.

As the President presented the award, a military aide at the ceremony read a citation that noted Mrs. Harris’ work in, “…supporting creative expression in Chicago and across our country.  Her decades of leadership and generosity have enriched our cultural life and helped countless artists, dancers, singers and musicians bring their talents to center stage.” First Lady Michelle Obama also attended the awards ceremony, which was live streamed at WH.gov/Live.

For more than three decades, Joan Harris has been on a personal mission to ensure the value of the arts in society and to fight for funding and respect for the arts. Through her advocacy and generosity, she has made an immeasurable impact on the national artistic landscape, ensuring that the arts are accessible, diverse, and integral to the lives of Americans.

Mrs. Harris has devoted her time and energy as a board member for 23 distinguished arts and cultural organizations nationwide. In Chicago, her visionary leadership and ability to understand the unique challenges facing emerging and mid-sized arts organizations resulted in the creation of the Joan W. and Irving B. Harris Theater for Music and Dance in 2003. Since that time, more than three dozen companies have found a home at the venue, establishing the Harris Theater as a cultural anchor in Chicago and an innovative role model for the collaboration that is possible between a performance venue and its resident arts community. This past season, The Harris celebrated a stellar 10 years enhancing the cultural landscape of a sprawling arts-rich metropolis like Chicago, while empowering emerging arts institutions who often struggle in such an atmosphere.

The National Medal of Arts is the highest award given to artists and arts patrons by the federal government. It is awarded by the President of the United States to individuals or groups who are deserving of special recognition by reason of their outstanding contributions to the excellence, growth, support, and availability of the arts in the United States.

Other recipients of the 2013 National Medal of Arts include acclaimed musician Linda Ronstadt; esteemed dancer and choreographer Bill T. Jones; and Jeffrey Katzenberg, director and CEO of DreamWorks. 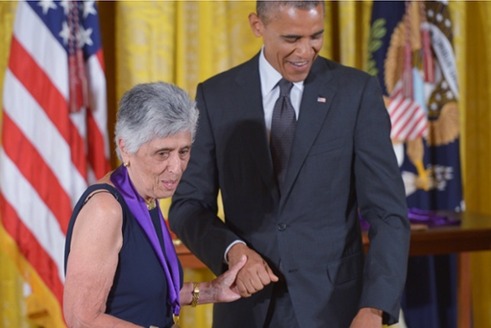