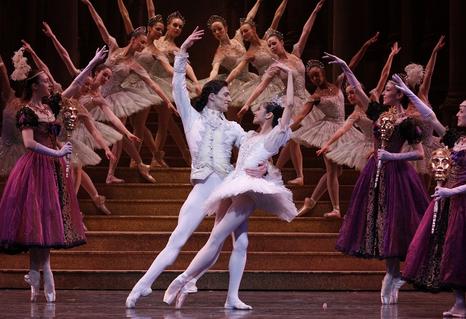 The Joffrey Ballet will celebrate the culmination of its 60th anniversary season with the return of Sir Frederick Ashton's beloved dazzling three-act ballet, Cinderella, which the company last performed here in 2010. Set to Sergei Prokofiev's classic score performed live by the Chicago Philharmonic, Cinderella is full of splendor, humor and magic, and is widely considered one of Ashton's greatest full-length ballets.

"The Joffrey Ballet's 60th anniversary has honored the incredible legacy of our founder Robert Joffrey," said Joffrey Ballet’s artistic director, Ashley Wheater. "In his spirit, we've pushed boundaries through innovative new work; we've celebrated his beloved The Nutcracker; and now, we conclude our season with the revival of Ashton's brilliant Cinderella, a favorite of Mr. Joffrey. Cinderella is one of the most popular and lavish productions in the Joffrey repertoire and we look forward to sharing this magical production with audiences this spring."

Cinderella was Sir Frederick Ashton's first full-evening ballet for the Sadler's Wells Ballet (now The Royal Ballet), the first full-length ballet of the century by an English choreographer, and the first in the Western world to use the Prokofiev ballet score that had been written for the Bolshoi Ballet.  When Cinderella premiered at The Royal Opera House, London, on December 23, 1948, the city was digging itself out of the rubble of World War II. The ballet offered a glimpse of hope for a weary population.

Wendy Ellis Somes, former dancer at The Royal Ballet, first staged this rags-to-riches story for the American debut at The Joffrey Ballet in 2006, fulfilling Robert Joffrey's dream of having the Ashton ballet in the company's repertoire. Somes will return with her colleague Malin Thoors for this staging. Breathtaking sets and costumes designed by David Walker will add beauty to this family favorite, featuring a full company of 45 dancers with 39 different characters.

Ashton's Cinderella tells the tale of downtrodden Cinderella who overcomes her mean-spirited step sisters and finds her Prince through the help of her Fairy Godmother and the Fairies of the Four Seasons. Pumpkins become coaches, rags turn to ball gowns, and the comedy of Cinderella's pantomime step-sisters-portrayed, as is tradition, by male dancers-provide the perfect foil for the developing romance of Cinderella and the Prince.

Cinderella will take place at the Auditorium Theatre of Roosevelt University, 50 E. Congress Parkway, Chicago, in ten performances only, May 11-22, 2016.

​For more information or for tickets, visit the Joffrey’s Box Office located in the lobby of Joffrey Tower (10 E. Randolph Street in downtown Chicago) or the Box Office of the Auditorium Theatre of Roosevelt University (50 E. Congress Parkway), by phone at (800) 982-2787, or online at ticketmaster.com.​