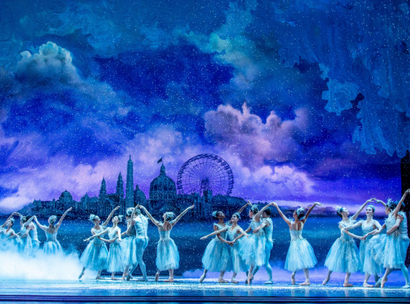 The Joffrey Ballet’s critically-acclaimed, reimagined classic, The Nutcracker, by Tony Award-winning choreographer Christopher Wheeldon, returns to open the holiday season at the historic Auditorium Theatre, in downtown Chicago this winter. This season’s production marks the last time The Nutcracker will take place at the Auditorium Theatre since its world premiere in 2016. The Company moves to the Lyric Opera House with the start of the 2020-2021 season.

New this year is an additional “Worker Girl” role who appears in Act I, following the prologue, during the ballet’s iconic party scene. The role will be alternated this year by Emma Lookatch and Larke Johnson, both students of the Joffrey Academy’s Adaptive Dance Program for students with diverse movement abilities, including but not limited to those with cerebral palsy, multiple sclerosis and down syndrome. With the new role, the children’s cast now totals 102 dancers.

“The Chicago’s World Fair storyline of Wheeldon’s Nutcracker is beautiful, and his addition of another ‘Worker Girl’ reinforces the Joffrey’s commitment to accessibility, following in the footsteps of Robert Joffrey, who believed everyone should have the opportunity to experience the art of dance,” said Ashley Wheater, The Mary B. Galvin Artistic Director. “We are proud that our Academy, which is currently celebrating its tenth anniversary year, is developing the skills of all its students, no matter their specific needs.”

Wheeldon’s American tale relocates Marie and her immigrant family to the Chicago World’s Fair in 1893, and opens as young Marie and her mother, a sculptress creating the Fair’s iconic Statue of the Republic, host a festive Christmas Eve celebration. After a surprise visit from the mysterious Great Impresario, creator of the Fair, Marie embarks on a whirlwind adventure with the Nutcracker Prince through a dreamlike World’s Fair.

The production features live music performed by the Chicago Philharmonic, conducted by Scott Speck, music director of The Joffrey Ballet.

Performances run from Saturday, November 30 through Sunday, December 29. Single tickets start at $35 and are available for purchase at The Joffrey Ballet’s official Box Office located in the lobby of Joffrey Tower, 10 E. Randolph Street, as well as the Auditorium Theatre Box Office, by telephone at 312.386.8905, or online at joffrey.org.

Classically trained to the highest standards, The Joffrey Ballet espouses a unique, inclusive perspective on dance, reflecting the diversity of America with its Company, audiences, and repertoire, which includes major story ballets, reconstructions of masterpieces and contemporary works.

The company’s commitment to accessibility is met through an extensive touring schedule, an innovative and highly effective education program, including the much-lauded Academy of Dance, Official School of The Joffrey Ballet, Community Engagement programs and collaborations with myriad other visual and performing arts organizations.

Founded by visionary teacher Robert Joffrey in 1956, guided by celebrated choreographer Gerald Arpino from 1988 until 2007, The Joffrey Ballet continues to thrive under Ashley Wheater, The Mary B. Galvin Artistic Director, and Greg Cameron, President and CEO.

​The Joffrey Ballet’s 2019  presentation of The Nutcracker will run at Auditorium Theatre (50 East Ida B. Wells Drive) in 29 performances, November 30-December 29, 2019. For tickets or more information, visit auditoriumtheatre.org.