Hailed as the “company of firsts,” The Joffrey Ballet has long celebrated innovative moves. The spring announcement of the creative team for the upcoming Nutcracker ballet world premiere choreographed by esteemed choreographer Christopher Wheeldon is no exception. After 29 years, The Joffrey announced that Robert Joffrey’s original “American style” Nutcracker would be retired on the Auditorium Theater stage last December, making way for a new Nutcracker set on the company. The Joffrey has been Chicago’s premier ballet company since moving to the city in 1995, and its month-long run of The Nutcracker has provided city audiences with the holiday classic for ten years, rivaled in size and scope only by Ruth Page’s Civic Ballet production of The Nutcracker at the Aerie Crown Theater back in its heyday in the 1970s. Now, as The Joffrey celebrates its 60th Anniversary season, artistic director Ashley Wheater explains the need for a new and improved holiday staple: “I knew we would need to do a new Nutcracker because productions fall apart scenically and costume-wise. Also the world has changed a lot, so now we want to tell a story that is for the new generation and (will last) for the years to come.”

​For this momentous task, choosing the right person was of utmost importance. As a former student and dancer at The Royal Ballet, Christopher Wheeldon went on to dance with New York City Ballet (NYCB). He became that company’s first-ever Artist in Residence in 2000, and was named NYCB’s first Resident Choreographer in July 2001. Additionally, Wheeldon has created productions for many of the world’s major ballet companies including American Ballet Theatre, San Francisco Ballet, Pennsylvania Ballet, Dutch National Ballet and many more. He has choreographed several Broadway shows, and earned multiple awards for his work in the field. If his list of accomplishments isn’t enough, his glowing review from Ashley Wheeter seals the deal: “I can think of no one better than Christopher Wheeldon to create our new Nutcracker. I have worked with Christopher for many years and discussed this (work) for nearly a decade. Great art takes time. Christopher has assembled a magnificent creative team and together they are inventing a magical world amongst the grand concourses of the White City." The “White City” of course refers to the moniker Chicago obtained during the 1893 Chicago World’s Fair. For this Chicago-centric Nutcracker, Wheeldon boldly takes the traditionally Victorian-set story-line and plops it right into the city we call home. “Chicago has a really rich history and I think one of the turning points of that history was the World’s Fair...So it is about the workers that are working on the World’s Fair and the journey of the World’s Fair.” Wheater explained in an interview.

​As if a simple change of scenery was not enough, mystery surrounds what seems to be potential changes in the story-line of the classic tale. To break out of plot restraints, author Brian Selznick was added to the creative team. Known for his work on the Oscar-winning movie Hugo, Selznick brings his Caldecott Medal winning skills to the table. He explained, “My job is to help Chris tell the narrative that he wants to tell. Story ballets have a narrative you can follow, and there are characters with motivations. There’s a plot. But with ballet, everything is told through movement, scenery, and action...So my job is to listen to Chris, understand the direction he wants to go, and then help him come up with narrative ideas that can be expressed through movement.” He assured, however, that the main plot of The Nutcracker will remain the same while a few tweaks will be added in order for the story taking place in its new setting to make sense.

​To further enhance the magic of the new work, Wheeldon and his team will also utilize the skills of puppeteer Basil Twist, who has worked on the Harry Potter movies, among many other stage productions and puppet shows. Twist’s role in the production is shrouded in secrecy. When asked what his main projects will be in the new production, he quickly says, “Chris doesn’t want me to say exactly what I’m doing, so I don’t want to spill the beans. I’m a puppeteer but I work in an expanded definition of puppetry which has sort of sense of animation and bringing things to life. It’s more a question of a low tech stagecraft, magic and illusion. So I fit between lots of different departments. I’m kind of like the sprinkles on top. I work with projections. I work with the lights, I work with the costumes, props. I get to work in the rehearsal room with the dancers, so I’m kind of all over.” Of the scenic enchantment he will create for the production Twist says, “(The Nutcracker) was a really powerful childhood experience of stagecraft for me, of seeing the tree grow and seeing the magic that happens on stage.” Audiences can anticipate Twist’s particular brand of magic peppered throughout the new production.

​Ashley Wheater elaborates in an announcement about the dynamic new creative team: "The Nutcracker has remained very close to my heart ever since I danced in the world premiere of Robert Joffrey's production in 1987. I have danced in many Nutcrackers through the years and understand the power of a good story, well told. We tell stories in a different way today. Dancers’ training and skills are a hybrid of classical technique and contemporary, athletic movement. We benefit from innovative theater technologies. We live in a diverse and rapidly changing world. Our storytelling must recognize these changes.” Underscoring these changes to dramatic effect, and creating a strong sense of anticipation for the new work, The Joffrey team brought “snow” falling on a group of gathered writers, dancers and students on the Auditorium Theater Stage at the production announcement in April. As the Chicago Philharmonic played the crowd off of the grand stage, snow from the production gently wafted onto the stage as a whimsical reminder that we’re in for a grand treat come December. 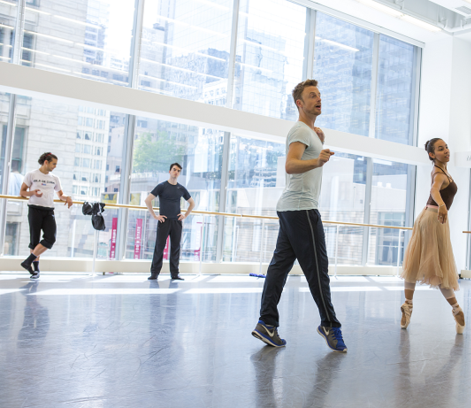