If you love the annual Joffrey Ballet presentation of Robert Joffrey’s The Nucracker, a holiday staple in Chicago, you’ll have just one more chance to see the Chicago holiday staple in all its glory when the company celebrates the 28th annual, and final, presentation of the classic production. One of Chicago’s most popular holiday traditions, The Nutcracker will be performed at the Auditorium Theatre of Roosevelt University (50 E. Congress Parkway, December 4 – 27) in a 24-performance engagement.

When Robert Joffrey choreographed The Nutcracker in 1987, he replaced the traditional European setting with a 19th century American home, populating it with toys from his own childhood. From there, familiar characters Clara and the mysterious Dr. Drosselmeyer embark on an incredible adventure.  Following a festive Christmas Eve celebration at the home of the Stahlbaums, Clara soon finds herself in the midst of a battle between a legion of mice and the heroic toy soldiers, led by the Nutcracker, where she unexpectedly saves the day. To reward her bravery, the Snow King and Queen whisk Clara (accompanied by her uncle Drosselmeyer) away to an enchanted forest and then the Kingdom of Sweets, where the beautiful Sugar Plum Fairy delights them with an array of exotic dancing confections. The Joffrey Nutcracker maintains the classical purity of Robert Joffrey’s original choreography while sparkling with elegant costumes, an extravagant set by Oliver Smith and that giant Mother Ginger puppet by Kermit Love.

For its 2016-2017 season, The Joffrey Ballet has commissioned Christopher Wheeldon—whose direction for Broadway’s An American in Paris earned him the 2015 Tony Award for Best Choreography—to re-envision a new Nutcracker. The new work will receive its World Premiere in December 2016. Wheeldon has presented several of his works with The Joffrey Ballet, including Swan Lake in 2014 and the Chicago premiere of Fool’s Paradise during Joffrey’s mixed repertory program “Millennials” this past fall.

“Robert Joffrey’s The Nutcracker has been an indelible trademark of The Joffrey Ballet’s repertoire for twenty-eight strong years, added Ashley Wheater, Joffrey artistic director. As we continue to celebrate our 60th anniversary season honoring the company’s countless milestones and continued growth, we’re honored to commemorate this production’s enduring legacy one final time with Chicago audiences and look forward to sharing a world premiere of a new Nutcracker in 2016.”

This year marks the 60th company anniversary for the Joffrey.

Tickets to the final performances of The Nutcracker are available at The Joffrey Ballet’s official Box Office located in the lobby of Joffrey Tower, 10 E. Randolph Street, as well as the Auditorium Theatre of Roosevelt University box office, all Ticketmaster Ticket Centers, by telephone at (800) 982-2787 or online at www.ticketmaster.com.

Chicago to Bid Farewell to Robert Joffrey Classic The Nutcracker 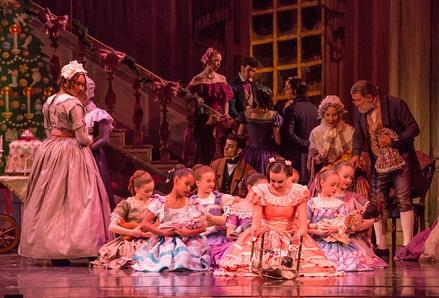