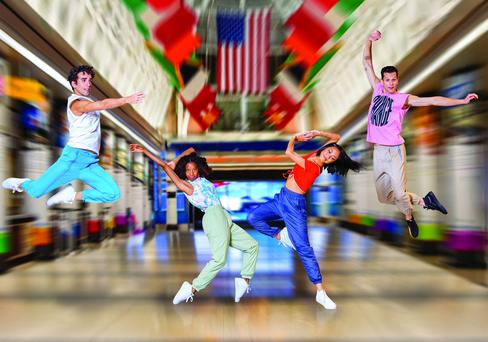 For its winter engagement, The Joffrey Ballet presents The Times Are Racing, a mixed repertory program featuring choreography from four of the most influential artists working today, including the Chicago premiere of Justin Peck’s 2017 ballet for which the program gets its name, two Chicago premieres by Israeli choreographer and former Batsheva Dance Company member Itzik Galili, a Christopher Wheeldon classic, and a new work from Chicago’s Stephanie Martinez, 2015 winner of the Joffrey’s Winning Works choreographic competition. The Times Are Racing is presented in ten performances only, February 12-23 at the Auditorium Theatre.

“Every season, the Joffrey brings the world to Chicago, and this year’s winter repertory program continues that tradition,” said Ashley Wheater MBE, The Mary B. Galvin Artistic Director, recently recognized by Her Majesty Queen Elizabeth II for his exceptional service to the U.K. in the field of performing arts. “We are grateful to these four choreographers for enabling us to begin the new year with an incredible program that includes all forms of dance and is pure ‘Joffrey’; daring, powerful, and athletic.”

Created in 2008 to mark the 100th anniversary of the founding of the Ballet Russes, Christopher Wheeldon’s Commedia takes inspiration from Igor Stravinsky’s Pulcinella Suite—originally composed in 1920 for a ballet that featured harlequinade costumes by Pablo Picasso. Commedia returns for an encore presentation following its Chicago debut in the spring of 2019, in a collaboration between the Joffrey and the Chicago Symphony Orchestra.

Itzik Galili brings two Midwest premieres to Chicago and the Joffrey. Wiggling hips, break-neck twists and turns, and feats of grand athleticism make up Galili’s Mono Lisa. This dynamic and seductive spin on the classical pas de deux evokes a daring game of cat and mouse, set to original music inspired by the clapping sound of typewriters. Galili’s second piece on the program, The Sofa, is a nuanced trio that takes shape as a love triangle run amok, with a set design that consists of a single piece of vinyl-covered furniture. Music by Grammy Award-winner Tom Waits adds emotional depth to this comical take on gender, sexuality, and relationships.

Award-winning choreographer Stephanie Martinez shares her newest work, Bliss!, set to the Dumbarton Oaks Concerto, one of only two chamber concertos composed by Stravinsky. A Chicago favorite, Martinez presents her first work for the Joffrey mainstage.

Fresh off his Tony win for Broadway’s Carousel (Best Choreography), Justin Peck’s Chicago premiere of The Times Are Racing is a “sneaker ballet” for 20 dancers that channels the power of protest. Danced to the last four tracks of Dan Deacon’s expansive 2012 album, America, with lighting by Peck collaborator Brandon Stirling Baker and streetwear designed by Opening Ceremony, this expressive ballet speaks to the times.

​The Joffrey Ballet presents The Times Are Racing February 12-23, 2020. Single tickets start at $35 and are available for purchase at The Joffrey Ballet’s official Box Office located in the lobby of Joffrey Tower, 10 E. Randolph Street, as well as the Auditorium Theatre Box Office, by telephone at 312.386.8905, or online at Joffrey.org.