Singer/songwriter John Gorka is just about as real a deal as you’re going to find on the concert scene today. Gorka’s been penning his own authentic brand of poignant, lyrical songs since the late '70s when he opened for headliners like Shawn Colvin and Suzanne Vega at Godfrey Daniels in eastern Pennsylvania. Today Colvin and Vega—and the host of other leading folk artists that inspired a college-age Gorka—now call him peer. In fact, Gorka has worked with many of the big names, including Mary Chapin Carpenter, and many have sung his heartfelt tunes.

Though authenticity is usually what sets his genre apart, authenticity is what sets Gorka apart from other artists within his genre. He’s a purpose-driven performer, driven to communicate the wealth of tender themes that permeate his music. Not surprisingly, Gorka’s soulful, velvet-toned voice melting on the lyrics of poignant, heartfelt tunes is more than enough to reach right down to the hearts of listeners. And that’s why audiences love hearing him. They leave with something near tangible in tow.

I had a chance to sit down with Gorka on the heels the of his 12th studio album, Bright Side Down, called one of his most important and meaningful music to date. And that’s saying something.

Gorka had a thing or two to say about the need to be out there in front of the audience, the need to communicate the themes of his own story, and reach the hearts—not just the ears—of the fan base that keep him coming back.

Now celebrating your 12th studio album, success has clearly taken you far from your beginnings at Godfrey Daniels coffee house back in Pennsylvania. Yet your music today seems every bit as authentic and fresh as your early efforts. How do you continue to write such grounded, emotionally accessible music with the many winds of change that typically steer an artist's work over the life of their career?

I feel that the strength of what I do comes from what I have in common with others and not in what I have that is different. I don't feel the need to look, act or be any different than the people out there listening. Bob Feldman, who started Red House Records, once said to me "People want to see themselves in the songs." I have taken that to heart. I don't feel that my life is all that special.  Even when I'm writing a song that came from my experience, I try to keep in mind that it is just one example of a larger truth.  I try to be true to the narrator's character, whether that be my or another's voice.  And, in general, I try to write of the things I feel strongly about, and more and more I try to get out of the way of the song and let it be what it wants to be. I am very grateful I have the chance to do this for a living.

For some artists and genres today, a studio recording can easily serve as the final piece in the artistic process, where concerts become an afterthought or a supplement to the recording project. But I get the sense that, for you, recording is merely a piece of that process that culminates in live performance. Do you ever envision a time when recording alone will be enough to satisfy artistically?

I have always based what I do on the songs and the live show.  I enjoy making records but of the 3 main things I do: performing, writing and recording, it is the thing I've spent the least amount of time doing.  I enjoy the process, the players, the technology, all of it, but nothing comes close to the immediacy of knowing when a song is connecting to a live audience. I think I will continue to play shows until I am physically unable to do so.

Your music seems to be all about the connection it makes with the audience. How then do you capture the same authenticity and spontaneity in a studio recording setting that you get with an audience to feed off of?

I think of them as 2 different worlds and I try to get them to work in both.  Songs are larger than recordings and they can have many lives even if no one else records them.  I can play a song exactly the same way I did on the recording but sometimes the world will change and meaning of the lyrics will change too. In recording I just try to get a performance that feels right and that I can live with after listening to it repeatedly.  That's one of the things I liked about recording Bright Side of Down was that we worked on it a little bit at a time and I was able to see how the performance held up and if the different elements of the track held up over time.  A live performance only has to connect with that particular room full of people at that one moment in time.  I have found that in recording, the first time I play something is often the best time so that we are trying to capture the moment of creation rather than recreating something for posterity. That doesn't mean that the first take is always the best take. Sometimes it takes me forever to play a particular song or instrumental part but it will be the first time I play a new variation that will be the one that works and becomes the keeper.

You once said in an interview that you were "drawn to" perform more than your were actually comfortable with it. Yet you are so well known for your stage presence and comfort with your audience. What happens to you when you take the stage that allows you to connect so easily?

I have more fun now than when I started performing. I think I have come to terms with my own discomfort and social shortcomings and now try to use them to my advantage with the audience. I don't have a comfort zone. I have never had a comfort zone, so I don't try to pretend that I do. Most of the time the audience understands and in any case, I am glad they are out there.

If your battery of work is any indication, your latest album is a distinct emotional journey. Where does Bright Side Down begin and where does it take the listener?

It begins in a blizzard before the actual official beginning of winter and ends with a hope for spring.  In between, there are indications of mortality, dealing with the loss of friends, but there is also joy in songs like “Honeybee” and some playfulness in songs like “Mind to Think.” In addition there are some musings and some smart aleck behavior. I hope it will be a nice ride for people.

You can catch part of that ride when John Gorka performs songs from Bright Side Down at his April 24th Chicago CD release concert at City Winery in Chicago’s West Loop.

Folk musician John Gorka celebrates the release of his 12th studio album in a concert this spring at City Winery on west Randolph in Chicago. (photo courtesy of the artist). 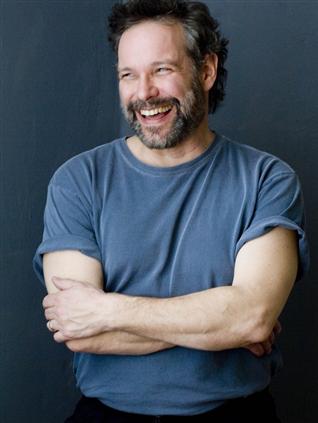