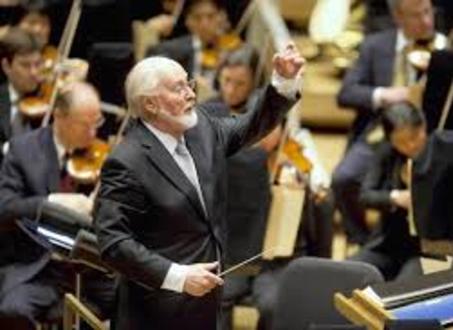 Award-winning film and concert composer John Williams will make his return to Symphony Center for four concerts with the Chicago Symphony Orchestra (CSO) April 26-29. Along with guest conductor Richard Kaufman, Williams will lead the Orchestra in program of selections that highlight Williams’s illustrious composing career.

Williams, who last appeared with the CSO at Symphony Center during the 2013/14 season, has long enjoyed a close relationship with the orchestra. He first led the CSO at the Ravinia Festival in 1994 and made his podium debut at Symphony Center in 2003 leading a program of selections from the film scores for the Star Wars and Indiana Jones series, and Schindler’s List with concertmaster Robert Chen as soloist. These performances also featured the world premiere of Williams’s Concerto for Horn and Orchestra, commissioned by the CSO and premiered by then-Principal Horn Dale Clevenger.

​Since then, Williams has made regular appearances leading the CSO at Symphony Center in selections from his vast film score catalog and original concert pieces for orchestra, including Elegy for Cello, performed by Yo-Yo Ma. Williams also led 2013 performances of his Violin Concerto with Gil Shaham as soloist. In addition to Williams’s podium appearances, his works are often performed by the CSO at Symphony Center on subscription concerts and, most notably, on the CSO at the Movies series, which has featured Williams’s entire scores performed by the CSO.

​Richard Kaufman has had an expansive music career as a conductor and violinist. The 2017/18 season marks his 27th year as Principal Pops Conductor of Pacific Symphony and the 12th year as part of the CSO at the Movies series. Kaufman also holds the title of Pops Conductor Laureate with the Dallas Symphony and regularly guest conducts for orchestras in Cleveland, London and Liverpool. For almost two decades Kaufman served as music coordinator for MGM, receiving two Emmy nominations during his time there. In 1993 Kaufman received a Grammy for Best Pop Instrumental Performance for a recording with the Nuremberg Symphony.

In association with these performances, the League of the Chicago Symphony Orchestra Association will be hosting its spring fundraiser “A Toast to John Williams” on Sunday, April 29, at 1:30 p.m. The event features pre-concert cocktails and savories and a red carpet party immediately following the performance.

​Tickets to this event may be added on to single tickets to the concert for a special price.

CSO subscription concerts in this series take place on Thursday, April 26 and Sunday, April 28 at 8 p.m. with additional performances taking place on the CSO at the Movies series Friday, April 27 at 8 p.m. and in a Chicago Symphony Orchestra Special Concert on Sunday, April 29 at 3 p.m.