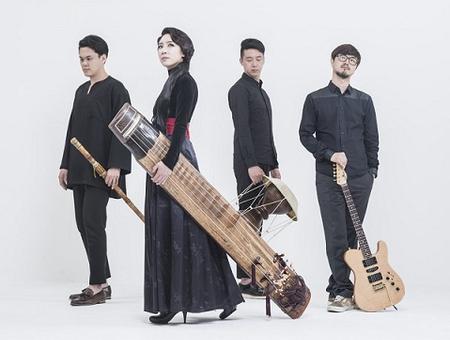 In January, Korean ensemble Black String brings its unique fusion of traditional Korean music, jazz, and free improvisation to the University of Chicago’s Logan Center for the Arts as part of UChicago Presents’ new Music Without Borders series.

Black String began in 2011 as part of a government sponsored Korea-UK cultural exchange program called “UK Connection.” The ensemble draws its name from the geomungo, a 6 stringed zither that when played, according to legend, summoned a dancing black crane. Playing the geomungo and leading the band is Yoon Jeong Heo, a young virtuoso and master of the instrument.

In a country where musicians of all stripes, from classical to pop, can rise to super-star status, Yoon Jeong Heo may be the leader of the nation’s folk music tradition. As the official steward of “Intangible Cultural Asset #16,” an official status given to vitally important aspects of cultural heritage by the South Korean government, Yoon Jeong Heo holds the future of Korean traditional music in her hands. Though the history of the geomungo and Korean traditional music dates back more than fifteen hundred years, Yoon Jeong Heo is not limited by tradition but rather uses it as the starting point, expanding the possibilities of geomungo and Korean music by bringing together different genres, fusing the traditional with improvisational and contemporary music.

​​That fusion is at the core of Black String’s music. Joined by Aram Lee playing Korean flute and hammer dulcimer (daegeum and yanggeum), Min Wang Hwang on zither and percussion (ajaeng and janggu), and Jean Oh playing electric guitar, Black String focuses on improvisation as an important element of traditional Korean music while creating a unique musical language footed in Asian tradition and contemporary musical intuition.

Listeners to Black String with no prior exposure to Korean music may recognize a dark, percussive fusion reminiscent of American jazz and post-rock, but for those versed in the traditional genres, there are also clear references to traditional, shamanistic styles of Korean singing.

Black String has performed at festivals around the world including at WOMEX 2016, the London Jazz Festival, and the K-Music Festival in London, and it is the 2018 winner of the Songlines Music Award for Asia & South Pacific. The group previously toured the US in 2017 and 2018, making stops in New York, New Jersey, Washington, D.C., and Miami, Florida, but the group’s January performance in the Logan Center for the Arts will be their first in the Midwest and their Chicago debut.

Before the concert, the group will be joined on stage by ethnomusicologist and University of Chicago associate professor Travis Jackson to discuss their music and its role in the cultural life of their native Korea, as well as their roles as cultural ambassadors around the world. After the performance, the audience is invited to meet the musicians at a reception in the Logan Center lobby.

The Music Without Borders series, on which Black String performs, brings three international artists to the University of Chicago for mini residencies throughout the academic year. On Monday, January 14, Black String presents a matinee performance for Chicago Public Schools students, and the group also participates in a panel discussion and luncheon with the Center for East Asian Studies at International House at the University of Chicago. In May, Iraqi oud player and composer Rahim AlHaj offers the last performance on the 2018-19 series.

Black String’s visit to the University of Chicago is presented in partnership with the UChicago Center for East Asian Studies with generous support from a Title VI National Resource Center Grant from the United States Department of Education.

​​For more information or for tickets to the concert, which takes place January 13, 2019 at the Logan Center for the Arts in Hyde Park, visit tickets.uchicago.edu.