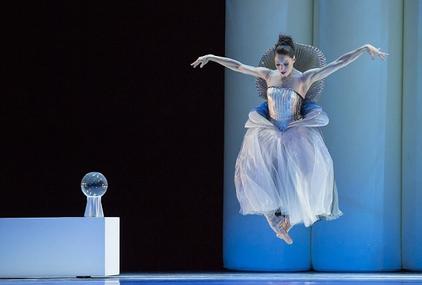 Les Ballets de Monte-Carlo, the national ballet company of Monaco, will perform at the Auditorium Theatre for the first time this spring with The Sleeping Beauty (La Belle), a spellbinding re-imagining of the classic fairy tale. The company, established in 1985 by Caroline, Princess of Hanover, honors the dance history of Monaco begun by Sergei Diaghilev and the Ballet Russes in the early 1900s.

“Les Ballets de Monte-Carlo continues the great dance traditions begun by Diaghilev and his Ballet Russes, who performed at the Auditorium Theatre in 1916,” says Tania Castroverde Moskalenko, Auditorium Theatre CEO. “More than a hundred years later, we are still the premier venue for dance in Chicago, and we are excited to welcome Les Ballets de Monte-Carlo to our historic stage.”

When creating The Sleeping Beauty (La Belle) in 2001, Les Ballets de Monte-Carlo artistic director Jean-Christophe Maillot took his inspiration from Charles Perrault’s original version of the story, which focuses on the lesser-known second half of the tale and what happens when “happily ever after” turns out to be not so happy. Set to the classic score by Tchaikovsky, this twist on Marius Petipa’s classic ballet is haunting and thought-provoking, with visually-stunning sets and intricate costumes.

Maillot joined Les Ballets de Monte-Carlo as artistic director in 1993 and has created more than 30 ballets for the company, including The Sleeping Beauty (La Belle), The Taming of the Shrew, Opus 50, and Scheherazade. Under Maillot’s direction, the company also has performed works by contemporary choreographers including Alonzo King, Alexander Ekman, Shen Wei, William Forsythe, and more.

In Maillot's version of The Sleeping Beauty, a young prince learns the story of a princess in a nearby palace. The princess, cursed by the evil fairy Carabosse as a young child, pricked her finger on a spindle and fell into a deep slumber. The Prince resolves to rescue the sleeping Beauty and sets off for her castle. Once he arrives, he awakens her and instantly falls in love, marrying her in secret. When the Prince becomes King just a few years later, his marriage to the Beauty is revealed, to the ire of the Queen Mother (performed by the same dancer who portrays Carabosse) – who just so happens to be an ogress. The Beauty, now a queen herself, has to then contend with her mother-in-law while protecting her own children.