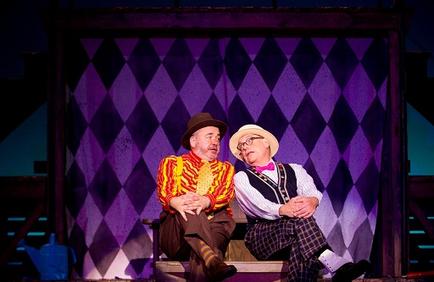 After 36 successful seasons, most theater companies wouldn’t dare rebrand themselves, but Wilmette-based Light Opera Works is doing just that. As of January 2017, the company will become Music Theater Works, and they’re pretty excited about the change that has been a long time coming. Artistic director Rudy Hogenmiller and general manager Bridget McDonough have both been hoping for the name change for the last 10 years. With support from their Board and their patrons, they’re making it a reality.

Says, Hogenmiller, “From the very beginning of being hired 10 years ago, I felt the name Light Opera Works was misleading....and I don't like to be misleading to the public. Sure, we were still occasionally doing an operetta, but mostly classic Broadway musicals, which are not ‘light opera.’”

He explains, “Nobody should have a name for their company that is confusing in any way....or negative. People would tell us, ‘Oh, I don't like opera, so no thanks.’ We don't do opera! Or when we’re doing a great classic like Fiddler on the Roof, we get calls asking us, ‘So are you doing the opera version of Fiddler?’ …Oye, for sure right? Just not a good thing.”

​“Many patrons suggested ‘Musical Theater Works,’ but there is a company in California with that name.  The name submissions inspired a lot of discussion and were instrumental in helping the Board come to the final choice. We are so grateful to our loyal fans who sent in over 300 suggestions. Many were very thoughtful and came with great background on how they (arrived at) their choices.”

McDonough also appreciates keeping a little bit of the old feeling in the new name. “There is no other company in Chicago with 'Works' in its name," he told me. "We also have always liked the fact that it has a lot of different meanings and is both a verb and a noun. We have always liked the play on words in our name.”

In the end, the new name isn’t so much about a change in direction for Light Opera Works. Instead, becoming Music Theater Works allows the company to highlight what they’ve already been doing for many, many years—producing classic musicals, concerts from the Great American Songbook…and yes, the occasional opera or operetta.

​“The new name is definitely more encompassing of many different genres of types of musical theater,” says Hogenmiller, “and that's good. We still want to be able to do an operetta or Gilbert and Sullivan and not have people wonder why we're doing that.”

He adds, “I do think the name change does encourage a change....but it's basically the change that has already been happening, ever since I came on board. Light Opera Works was already starting to transition into more classic Broadway musical theater instead of operetta.”

The company’s loyal and enthusiastic patrons have always been the reason for the company’s evolution throughout the decades. Though lovers of operetta aren’t as abundant as they used to be, they are still out there, along with lots of Broadway musical enthusiasts, and Hogenmiller and McDonough have put a lot into making sure the company is doing quality work that inspires and entertains the people who come to see their shows season after season.

​Says Hogenmiller, “We know that people who love operetta or opera, love good music and good story telling. That's why the great classic Broadway musicals, especially from the Golden Age, have worked well for us....they always have a beautiful score that's worthy of the full orchestra.”

The full orchestra—the very full orchestra—is one thing that most definitely will not be changing when Light Opera Work's name change becomes official. With 24 to 32 pieces playing any given show, audiences are always treated to a fantastic orchestral experience.

“We have a loyal audience that knows how wonderful our productions are, and they want others to experience them,” says McDonough. “We present great music theater, performed in a theater that is the size these works were intended to be experienced—not too big to swallow them and not too small to compromise their musical values. Cahn Auditorium is 1,000 seats. Everyone is close to the stage, yet we still perform with full orchestra (and) a full chorus. We do not project the lyrics or dialog—you can hear it and understand it. This ‘just right’ experience is why we are still here for our 36th season.”

​That 36th season is shaping up to be a crowd-pleaser for Light Opera Works, too. Running June 4 - 12  is Lerner and Loewe’s My Fair Lady featuring two talented Chicago actors (Elizabeth Telford as Eliza and Nick Sandys as Henry Higgins) and a 28 piece orchestra.

Following that, audiences will be treated to a spectacular production of Jerry Herman’s Mame (August 20 - 28) featuring Nancy Hayes as the titular character, Mary Robin Roth as Vera Charles, plus a large cast of adult singers and dancers and a 26-piece orchestra.

Hogenmiller muses, “I don't think the Chicago area has seen a full professional production of Mame with all the original orchestrations since the original tour played here, which I don't know when that was, but I'm guessing sometime in the late ‘70s or early ‘80s? It's a great fun show with a great score, and I know our audiences are gonna love it."

​Audiences are also sure to be delighted with the rest of the season. Their concert production, "Let Me Entertain You" treats patrons to Jule Styne’s greatest hits including songs from Gypsy and Funny Girl (October 7-16). Fittingly enough, Light Opera Works’ final show as Light Opera Works will be an English translation of Johann Strauss’ Die Fledermaus (December 26 - January 1).

After Die Flaudermaus closes on January 1, Light Opera Works will become Music Theater Works on January 2. Though the name is going away, the love of all things musical will remain as the 36 year-old company continues to bring plenty of entertaining productions—musicals, concerts and the occasional “light opera”—to Chicagoland audiences.

Change in the Works

Wilmette theater staple Light Opera Works is sharpening their brand with a name change that just may be the ticket to even broader audiences this fall.