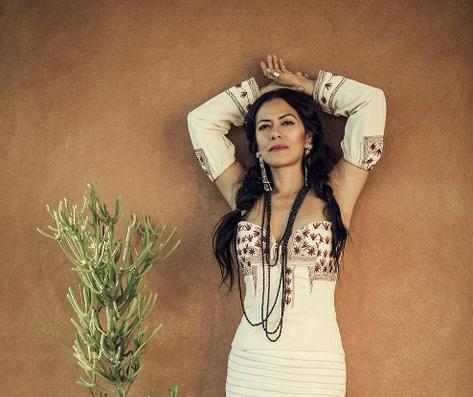 In a special concert at Chicago’s Symphony Center, singer-songwriter and multi-Grammy Award-winning artist Lila Downs will perform with the Chicago Symphony Orchestra (CSO) led by guest conductor Donato Cabrera at 7:30 p.m. on Tuesday, June 28. The program features Downs performing with the CSO in selections from her 2015 release Balas y Chocolate (Bullets and Chocolate) as well as traditional selections chosen by the singer.

Born in Oaxaca, Mexico to a Mixtec Indian mother and a British-American father, Downs’ music reflects a childhood which straddled Mexican and North American cultures. Her style embraces traditional folk music from the U.S. and Mexico while also fusing jazz, blues, hip-hop, cumbia, and even klezmer influences. With lyrics in English, Spanish, Portuguese and indigenous Mexican languages, Downs sings of social justice, the search for cultural roots and the lives of Mexican migrant workers in the United States.

​Beginning with her 1994 debut album, Ofrenda, Downs has released 12 studio albums garnering multiple Grammy nominations and ultimately earning both a Grammy and a Latin Grammy for her 2011 release, Pecados y Milagros. She has been invited to sing at the White House, the 75th Annual Academy Awards, the 2012 Latin Grammy Awards, and has performed at music festivals around the world and at prestigious venues including Lincoln Center, Carnegie Hall, the Hollywood Bowl and the San Francisco Symphony’s Davies Hall.

​Downs’ latest album, Balas y Chocolate was released in March 2015 to critical acclaim. Inspired by the Mexican Day of the Dead, the album examines the themes of sensuality, life and death, and celebration and mourning. In keeping with these dichotomies, it is an optimistic album despite being influenced, in particular, by the violence that plagued Mexico in 2014. Since its release, it has been hailed as one of the Best Albums of 2015 by the UK Sunday Times and among the best world music releases by iTunes in that same year.

The June 28th program opens with the CSO performing contemporary Mexican composer Arturo Marquez’s Danzón No. 2 led by Donato Cabrera. The colorful orchestral work was inspired by the danzón dance style, which originated in Cuba in the 19th century and is still danced in the Mexican states of Oaxaca and Veracruz. Cabrera has been the Resident Conductor at the San Francisco Symphony since 2009, and simultaneously serves as the music director for the San Francisco Youth Orchestra, the Las Vegas Philharmonic, and the California Symphony.

​Tickets for Lila Downs with the Chicago Symphony Orchestra are available in person at Symphony Center, 220 South Michigan Ave., by calling the Symphony Center Box Office at 312-294-3000, or online at cso.org.