Alonzo King’s LINES Ballet will make its return to Chicago this winter bringing a series of works as part of the Harris Theater’s 10th anniversary season. LINES Ballet is no stranger to Chicago, having just unveiled a multi-year collaboration with Hubbard Street Dance Chicago called "AZIMUTH" last season. This winter, LINES will unveil two Chicago premieres. On February 27, the company performs the evening-length “Constellation,” a collaboration with San Francisco based light artist Jim Campbell featuring astounding visual effects and the orientation of bodies to light. Additionally, a partnership with bassist and Grammy Award-winning composer Edgar Meyer, aptly called “Meyer,” will be paired with a third piece for the February 28 performance. This array of work offers Harris Theater audiences the option of attending two performances, and provides an enlightening view of the company’s eclectic body of work.

When explaining the name of his company, founder of the San-Francisco-based LINES Ballet, Alonzo King, has said, “There is nothing that is made or formed without a line…. Lines are in our fingerprints, the shapes of our bodies, constellations, geometry…. a line of thought; a boundary or eternity; a melodic line; the equator. From vibration or dot to dot, it is the visible organization of what we see."

This statement encapsulates King’s keen understanding of ballet as the product of universal, geometric principles of energy and evolution. And that understanding drives King's choreography. His works are also grounded in a sense of shared humanity, and perhaps this ideology of shared experience is precisely why King has become particularly well known for his collaborations with world-renowned artists. When asked about these famous partnerships, King responds, “Everything is a collaboration.  The dancers are human beings. They are also collaborating. Your mind and body have to collaborate.”

Both “Meyer” and “Constellation” beautifully illustrate the effects of talented artists melding their crafts into a seamless production. With “Constellation,” in partnership with Campbell’s stunning light art, LINES Ballet explores design from a myriad of angles. When asked about “Constellation,” King easily drew the connection between the lighting design and a broader human experience of design. Both of these elements—physical and metaphorical—define the work.

“Constellation,” as King points out, was inspired in part by the way the ancients oriented their lives around the alignment of the stars. “Sets of constellations are aligned with ancient structures,” King explained. “Certain points in pyramids are aligned with certain constellations that have a physical placement of that same alignment within the human body. That place of magnetic connection and the idea of cause and effect are a map of our lives.”

Of course, it’s not merely this idea of design and how life and bodies are oriented, but also the sense of radiance that underscores the piece. “When a human being is joyous/radiant, they shine," King told me. "The goal and the job of the dancer is to radiate….They bring light and light means intelligence and understanding. They are showing us how life can be lived through bravery, through never giving up, through an absorption in concentration that makes the audience disappear, allowing an internal dialogue.”

If it's fair to say that “Constellation” is based in light, then it follows that water plays an important role in “Meyer.” A backdrop of synchronized water, created by award-winning designer Jim Doyle, adds texture to an exhilarating performance. Edgar Meyer’s score for the piece mixes classical and jazz for cello, violin, double bass, and piano, and sets the tone for LINES dancers, whose movements progress through playfulness, contentiousness, and high-energy solos and duets throughout the work.

“Meyer” has been noted as having hints of narrative—a rare quality in King’s repertoire that has been labeled by some as abstract. King, however, explains it simply, that there is narrative in everything, and it is wrong to think that an abstract work lacks a story. “Abstractions are thought(s) that are so fine that words are too clumsy for, so you create a symbol that reduces those thoughts and ideas to a form. Dance is thought made visible…. Everything is about something.”

Ultimately, King invites audiences to come and experience “Constellation” and “Meyer” for themselves, recognizing that a description of a piece of art could hardly communicate the experience of it. “If we were having a conversation about an orange,” he explained. “And you had never seen or tasted one, and I described it to you, in your head you can mentally try to assess it, but it doesn’t mean a damn thing until you experience it yourself. Go experience it, and then you will have the information. And what you take from it is valid, it is yours. What you need is an open heart and an open mind.”

Alonzo King’s LINES Ballet will perform at Harris Theater for Music and Dance in Millennium Park on February 27 and 28. The company performs “Constellation” on February 27 at 7:30 p.m. The February 28 performance includes “Meyer” and another work to be determined.

Probing choreographer Alonzo King set to return to Chicago with his acclaimed LINES Ballet bringing a pair of thought-provoking works to the Harris Theater stage. 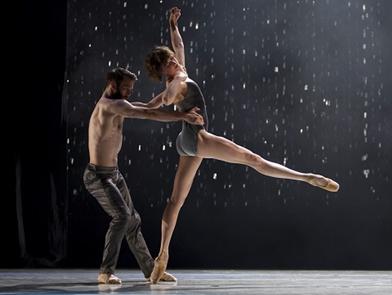