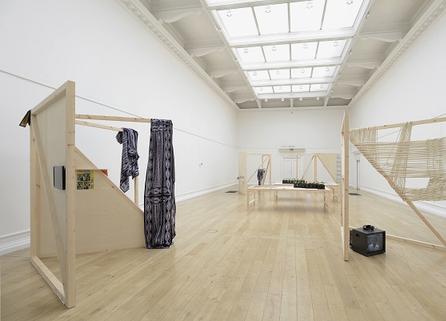 Logan Center Exhibitions at the University of Chicago will soon present a selection of newly commissioned work by artist Kapwani Kiwanga in her first solo exhibition in the United States: Kapwani Kiwanga: The sum and its parts, on view at the Reva and David Logan Center for the Arts. Running January 20–March 12, 2017, the exhibition features a site-specific installation, video, and prints that draw on the artist’s research into the design of institutional spaces, including materials found in the University of Chicago’s Special Collections Library.

Across the elements of Kapwani Kiwanga: The sum and its parts, Kiwanga deconstructs the physical and psychological qualities of different built environments including schools, prisons, hospitals and mental health facilities. In the main gallery, Kiwanga brings together architectural elements from historical and contemporary versions of these spaces including wall sections, lighting fixtures and surface treatments creating a spatial collage that escapes the sum of its fragments. For these works, Kiwanga has drawn from her extensive research into disciplinary architectures throughout time, extracting specific details from the designs of late 19th century workhouses and reformatory schools in Britain and France respectively.

​“Kiwanga’s installation transforms the Logan Center Gallery into an experiential space that is guided by the artist’s astute architectural interventions,” explained Yesomi Umolu, exhibitions curator at the Reva and David Logan Center, and curator of the exhibition, “With this, Kiwanga underscores the built environment’s function as a mechanism for regulating human behavior. This allows visitors to consider the mental and physical effects of the various spaces that they occupy daily.”

A distinctive feature of the new show is the artist’s transposition of two-tone color palettes—often used in the interiors of institutional spaces—onto the gallery walls. Social hygiene movements and hospital reforms at the turn of the 20th century inform the artist’s selection of colors as well as the work of Chicago-born color consultant and color theorist Faber Birren. A student in the College at UChicago in the early 1920s, Birren later established a consulting company, advising on the use of color in industry and the workplace. Drawing from color design studies by Faber Birren and Company held at the University of Chicago’s Special Collections Library, Kiwanga recalls the application of color theory to the conditions of work, learning, surveillance, healing and care. Also on view is a selection of prints that reproduce images from Birren’s archive and a new film A primer that delves deeper into the spatial histories of different building typologies.

​Born in Hamilton, Canada and based in Paris, Kiwanga produces works across installation, performance and video that marry her training in anthropology and comparative religions with her interests in history, memory and mythology. Presenting rigorous research in imaginative ways, Kiwanga intentionally confuses truth and fiction in her work in order to enable fantastical narratives.

The new commissioned film A primer is co-produced by Logan Center Exhibitions, University of Chicago and The Power Plant, Toronto.

Major support for the new exhibition is provided by Etant Donnés Contemporary Art, a program of FACE Foundation, developed in partnership with the Cultural Services of the French Embassy in the United States, with lead funding from the Florence Gould Foundation, the Helen Frankenthaler Foundation, the French Ministry of Culture and Communication and Institut Français-Paris. Additional support comes from the France Chicago Center at the University of Chicago.

​For more information on the exhibition and related programming, visit arts.uchicago.edu/logan-center/logan-center-exhibitions.