Longtime Lookingglass Theater stage manager gets her wings with new production of her first stage play.

Lookingglass Theatre’s imaginative upcoming production, In the Garden: A Darwinian Love Story, is written by the company’s long standing stage manager, artistic associate Sara Gmitter. Gmitter (40) has been with Lookingglass for 15 years and has worked on over 40 productions with the ensemble. After devising and running two original pieces for the Lookingglass Young Ensemble—Waging Peace and Mending the Peace—Gmitter is making her authorial debut on the main stage. In the Garden is the story of the marriage of Charles Darwin and his wife, Emma. “Like most people involved in theater, I started out as an actor,” says Gmitter from her home, now in Santa Fe. Her obsession with theater began back when she was in the second grade. “I was an incredibly shy child—painfully shy,” she admits. Her teacher, though, challenged Gmitter’s shyness when casting a school play, Sad Sam the Clown, asking her to play the lead.  “I thought I would die,” Gmitter says, “but once we started rehearsing, I found that talking in front of people was a lot easier when you know exactly what you’re going to say and what they’re going to say back. When the night of the performance came and I was in costume—this complete clown suit with a wig and makeup—I looked in the mirror and I was a completely different person. I remember my legs shaking when I walked out on stage for the first time and being afraid they wouldn’t hold me up—but once I said my first line, it was like something magic had happened.  Then at the end there was all this applause and compliments, and I was hooked.”

Gmitter stuck with drama classes throughout high school, then began building an impressive, and well rounded, background in theater education, working an internship at the famous Guthrie Theatre in Minneapolis, and then majoring in theater  at the College of William and Mary in Virginia. “In college, I tried some of everything—I acted, directed, stage managed, designed sound, ran crew, built costumes, worked in the box office. In fact, I think I did just about everything except write!” After graduation, Gmitter moved to Chicago and got involved with Lookingglass Theatre, having seeing their production of Arabian Nights.

Operating behind the scenes at the theater, she saw an inroad to working in the field she loved. “Becoming a stage manager seemed like a great way to experience all aspects of production, and I found it much easier to get paying work as a stage manager than as an actor. I have come to love it for its own sake, but I feel that stage managing for Lookingglass is the apex of what I could want in (that) career…So I reached a point when I felt I needed to turn to other areas of interest (in the theater).” After more than 40 productions, Gmitter is now presenting her first major stage play to the public.

For a long time, Gmitter had already fancied herself a writer, having written short stories and worked on theatrical adaptations during her time behind the scenes at Lookingglass. It wasn’t until she stopped stage managing that she had the time and focus necessary to develop further as an author.

“I heard a podcast interview with a woman who’d written a young adult biography of Charles and Emma Darwin. I realized there was so much I didn’t know about Darwin, the person, not the Father of Evolution, and I was fascinated by the idea of their marriage—a skeptic and a devout Christian—a couple who had to figure out together how to live their lives and raise their children in the midst of this huge conversation about science and religion. I was struck by what a wonderfully personal perspective they could bring to this very abstract conflict. I remember thinking after the interview was over, ‘That would be a great idea for a play.’” Gmitter’s research was relatively easy. “Fortunately there’s so much material out there—letters and journals written by Charles and Emma. I became quite enchanted with their story. Their letters to each other are so genuinely loving and sweet.”

And thus, In the Garden: A Darwinian Love Story was born. “It’s a love story, really, set amid one of the great intellectual conflicts of our age and the relative merits of faith and proof,” Gmitter explains. “But even beyond that specific conflict, the play is about how we reconcile ourselves with people who think differently than we do on any important subject and whether it’s possible to find enough common ground on which to build a life.”

Gmitter, who also has an MA in Peace Education, now has several more writing projects “churning around in the hopper to see which pops up as the most viable for a next project.” She wants to do peace education work, which, as she describes, is “about both what you teach and how you teach. The content can include things like media literacy, conflict resolution skills, human rights education, environment education, cultural awareness, tolerance and acceptance building, and social justice.” Gmitter hopes to find an organization in Santa Fe with which she can partner.

I guess it’s safe to say Gmitter will be as involved exploring her newest direction as she was learning the ropes staging managing at Lookingglass. And with the addition of her upcoming wedding this summer, her plate will definitely be full. 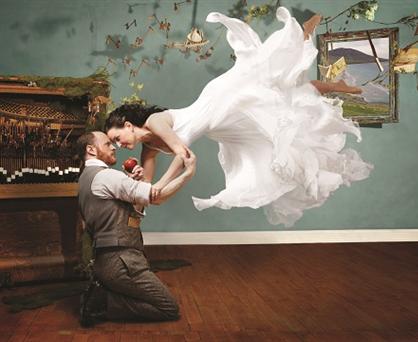