'Til Death
This spring, Lookingglass Theatre will mount Blood Wedding, a poignant work of passion and intrigue by the late Federico  Garcia Lorca, a writer whose life and death were fueled by the same. 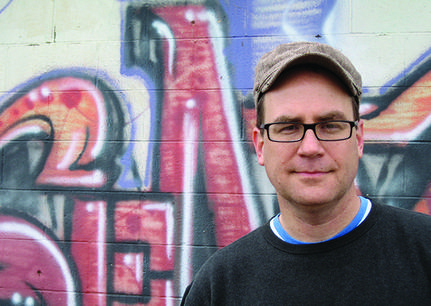 Spanish dramatist and poet Federico Garcia Lorca belongs to that elite group of writers who died young but first managed to create the kind of exemplary literature that following generations read and study passionately—and probably romanticize. Why? Because the lives of writers are so often idealized into a kind of mythology. When a playwright dies young, it only adds to the mystery and serves to heighten that mythology, a mythology that ultimately no one can truly protest. Everything remains as the writer envisioned it and his death becomes a kind of final literary seal on any questions regarding the author’s true vision. Questions could arise, sure. But we must ultimately choose to either accept the author’s vision or reject it. We just can’t debate it with the writer.

Lookingglass Theatre, currently mounting a new production of Lorca’s most famous play, Blood Wedding, presumably holds a positive view of Spain’s most famous contemporary playwright. First performed in Madrid in 1933 when Lorca was only 35, Blood Wedding would seem to be a precursor to Spanish soap operas, which would become so popular later in the century. The title is almost its own spoiler alert, alluding to nuptials that we can comfortably assume won’t end so happily-ever-after.

The story begins with a character simply named “Bridegroom” discussing his bride-to-be with his mother, who is similarly named. Mother has already lost both a son and a husband to violence, and now she fears for her remaining son’s life. She loves her son and trusts his choices, but loss has made her anxious.

The mother has good reason to be anxious. The first love of her son’s fiancé just so happens to be a member of the Felix family, who just happens to be responsible for the deaths of her husband and son. It’s a small town; of course, coincidences like this happen. This first love, Leonardo (the only character in the play to be given an actual name) is now married and quite miserable. He still has feelings for Bridegroom’s fiancé and the second act ends with Leonardo dead set on pursuing her. The marriage takes place, but shortly thereafter, Leonardo convinces the new bride to run away with him. Bridegroom pursues, and passion turns to, you guessed it, violence; ergo the play’s ominous title.

Lots of jealousy and unbridled passion fill the script. Add to this such highly poeticized characters like the forest woodcutters who behave as a kind of Greek chorus foretelling the plights of the renegade lovers, along with the characters Moon and Death (Death in the form of a beggar-woman), and you have what might be more easily seen as presentational melodrama than classic literature. Somehow, however, that script works.

Passion is the real key to why it does work and why this  Lookingglass production might excel. Lookingglass ensemble member director Daniel Ostling speaks with such fervor about the play and upcoming production that his excitement becomes infectious: “The passions these people feel transcend their ordinary lives.”

He’s right. Those passions burn from a deep enough reserve to transcend the ordinary, overcoming what might otherwise dissolve into simple presentational melodrama.

Lorca belongs to a canon of writers that include such names as Christopher Marlowe, Jack London, Hart Crane and Sylvia Plath—writers who lived tumultuous lives that burned out tragically early. For such writers, literary excellence mixes well with personal mythology; each informs the other and the two become inseparable. Life and work are the same. Living life to the fullest only fuels the idea of romance.

Federico Garcia Lorca was born in 1898 and began writing poetry at the age of 17. After attaining a law degree in 1923, Lorca pursued his passion for the arts as poet, dramatist, artist and his first love, music. While he had opportunities to make a living both as a lawyer and a teacher, his passion for the arts kept drawing him back to the theater, where he fueled his scripts with “laughter and tears” as his brother Francisco related in the introduction of Lorca’s Three Tragedies. “Art was a consequence of his life,” Francisco wrote. “For Federico the most important thing was life.” Lorca was assassinated by the Nationalist Militia in 1936 at the start of the Spanish Civil War. He was 38.

His passion might be what led to an ironically romantic death for Lorca. While never heavily involved in politics, his socialist leanings certainly informed his art, and he was not quiet in working toward a public stage in Spain, where those who could not afford theater might have the opportunity to see it for free.

This same passion is what separates Lorca from other dramatists, making visceral,  poetically charged lines of dialogue that might otherwise dissolve into melodrama. Of course, Lorca remains one of Spain’s most renowned poets.

This same infectious passion will surely be seen in Ostling’s staging at Lookingglass. Ostling, an ensemble member with Lookingglass since 2003, came to stage directing via set design, where he has had extraordinary success in Chicago, New York and San Francisco. (His set design for Bruce Norris’ Clybourne Park, garnered him a Tony nomination in 2012.)

Ostling was so intricately involved with designing a production of Jacque Brel is Alive and Well that when the original director could not fulfill his obligation, the producer of the show saw Ostling as the only natural person for the task, hence his directing debut in 2011.

Ostling’s own passion will surely fuel the Lookingglass production from the set designing angle as well as he also wears that hat this spring. The script is Ostling’s favorite and one he has been pushing for at Lookingglass for years, finally getting it a mainstage slot for the 2015-2016 season.

Fortunately for this production, Ostling’s passion for the script just might help transcend some of its inherent difficulties. With a living playwright, we might be able to ask why they chose to place the two most decisive choices in the script offstage—which would be nice to be able to do with Lorca. One might then ask him why some of the most passionate character interaction and plot-driving moments take place offstage, why symbolism is utilized to depict some of the play’s most poignant moments. These choices are indeed quite bold. But how can such concepts come across as genuine in an age that suffers the brutalities of urban crime, violence and terrorism?

What Lorca might have understood is that, ironically, symbolism often resonates deeper than explicit show; what we imagine sometimes leaves a more profound impression than an actual image.

It’s our imagination that Ostling will exploit in this production. As he describes, “One day we are all coming face-to-face with death. It’s one thing that we’re all going to share; we’re all going to take that journey,” a journey we can only imagine until we do take it.

Ostling’s passion for Lorca’s passion is so infectious, it simply must translate into exciting theater. After all, death is not simply death but a moment where everyone stands upon the crumbling cliff above the unknown below. It makes one eager to see just how Ostling will succeed in bringing so much death to life on the Lookingglass stage.