Lucky Plush Productions in The Queue (photo by Benjamin Wardell).

Prior to launching a national tour with their latest work, from May 2 – 18, 2014, Chicago based dance theater company Lucky Plush Productions will perform the world premiere of The Queue at the new Links Hall, 3111 N. Western Ave, in Chicago.

Equal parts dance and theater, The Queue,  is co-created by choreographer/director Julia Rhoads (founding artistic director of Lucky Plush and recipient of a 2013 Alpert Award in the Arts) and theater director Leslie Buxbaum Danzig (co-founder of 500 Clown). The Claudettes, a neo-vaudevillian piano-drums duo (Michael Caskey and Johnny Iguana), compose original music and perform live for the work.

Set in a fictional international airport, The Queue’s influences are early 20th century forms of slapstick, vaudeville acts, Busby Berkeley style choreography, and creaky 1-act plays. The central narrative is adapted from a 1746 farcical play A Will and No Will, in which the imminent death of an old man propels an assortment of seemingly unrelated characters into a chaotic negotiation of their stakes in his life (and death) and their potential inheritances.

The Queue playfully addresses how private dramas in public spaces can slip into a kind of performed spectacle, particularly in the pressure-cooker environment of an airport, a place that captures people en route to big life events (weddings, funerals, honeymoons, big business). 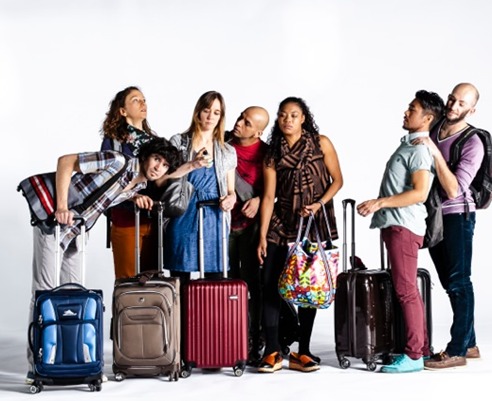