Lyric Opera of Chicago is has announced that soprano Ana María Martínez and bass-baritone Eric Owens will serve as the inaugural Community Ambassadors as part of the Lyric Unlimited initiative. These two artists will strengthen and actively participate in new, ongoing, and future Lyric Unlimited programs that serve and engage schools and the larger community, including the Vocal Partnership Program, Youth Opera Council, Teen Opera Circle, Lyric’s ongoing relationship with Latino communities, and other collaborative community events. Martínez and Owens are starring in Lyric’s new production of Rusalka, which opened on Saturday, February 22 and runs through March 16.

The Community Ambassadors program stems from the vision for Lyric set forth by General Director Anthony Freud, Music Director Sir Andrew Davis, and Creative Consultant Renée Fleming, who anticipate inviting additional artists to serve as Community Ambassadors in coming seasons. Launched in 2012, Lyric Unlimited aims to provide a relevant cultural service to communities throughout the Chicago area, including communities for whom opera and opera companies have been largely irrelevant.

As artists of international renown who will appear on Lyric’s stage in operatic productions over multiple seasons, Martínez and Owens have a unique opportunity to build connections with children, students, and people of all ages, sharing their experiences as performers and helping to break down barriers to participation in opera. When in Chicago, they will visit a variety of sites—including schools, community centers, hospitals, and cultural institutions—engaging in activities such as speaking engagements, panel discussions, master classes, and more. They will also strive to make repeat visits to sites to build long-term relationships that evolve over time. Both are engaged for the upcoming 2014-15 season (Martínez in Don Giovanni and Owens in Porgy and Bess). Lyric has also announced that Owens will star as Wotan—a role debut—in its new Ring cycle, beginning in the 2016-17 season.

To officially launch this new program, Martínez and Owens visited with students at Young Women’s Leadership Charter School (YWLCS) on February 18, 2014. The students at YWLCS are currently studying Rusalka as part of Lyric’s Teen Opera Circle program and talked with the singers about their roles, the production, and their careers as performers.

“We are thrilled that these two extraordinary artists have agreed to join Lyric Unlimited in taking opera beyond the stage into classrooms and the broader community,” said Freud. “Ana María and Eric are ideal ambassadors for our art form.”

Martínez and Owens will both make additional visits to Chicago-area schools while they are appearing in Rusalka. Lyric Unlimited is supported in part by a  grant from the Hurvis Family Foundation. For more information about Lyric Unlimited or Lyric Opera's 2013-2014 season, visit lyricopera.org.

Lyric Opera has announced that soprano Ana María Martínez and bass-baritone Eric Owens will serve as the inaugural Community Ambassadors as part of the Lyric Unlimited initiative, which reaches out beyond the Civic Opera House stage into the broader Chicago community to share the gift of opera (photo courtesy of Lyric Opera of Chicago). 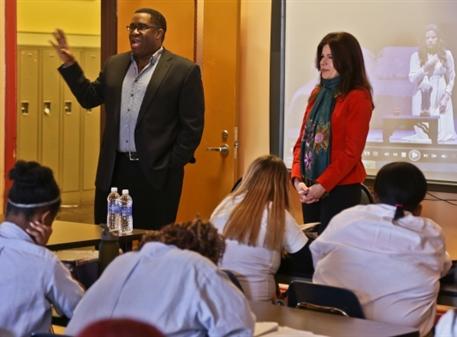