multitalented Tito Gobbi both starred as the Don and directed this production, which featured sets and costumes by the legendary designer Peter J. Hall. In this photo, Don Giovanni (Gobbi) seduces Zerlina (Judith Raskin). - See more at: http://www.lyricopera.org/blog/blogpost.aspx?id=14828#sthash.FQ1AxmWw.dpuf

Lyric Opera of Chicago is has mounted an all-new exhibition, Don Giovanni: Past to Present, at the Civic Opera House. The exhibit opened Saturday, September 27, coinciding with opening night of Lyric’s new production of Don Giovanni, conducted by Sir Andrew Davis, Lyric’s music director, and directed by Robert Falls, artistic director of the Goodman Theatre. Located in the Opera Club Wine Cellar on the lower level of the Civic Opera House, the new exhibit showcases the history of Mozart’s Don Giovanni at Lyric and pays tribute to Lyric’s brand-new production.

In February 1954, the Lyric Theatre of Chicago (which would become Lyric Opera) presented Don Giovanni in two calling-card performances before officially opening its first season in November. The company has a unique and long tradition of mounting new productions of this opera on anniversary years. The exhibit features materials from many of Lyric’s productions, including those directed by William Wymetal (1954, 1956); with set designs by Franco Zeffirelli (1964) and costume designs by Peter J. Hall (1964, 1969); directed by Tito Gobbi (1969); directed and designed by Jean-Pierre Ponelle (1980, 1988-89, and 1995-96); and directed by Peter Stein (2004-05).

Production photos and set designs from historical productions are displayed in vintage frames. Costumes on display include pieces worn by Nicolai Ghiaurov, Teresa Stich-Randall, Alfredo Kraus, Susan Graham, Bryn Terfel (who has performed at Lyric as both Leporello and Don Giovanni), Ildebrando d’Arcangelo, and Carol Vaness (who portrayed both Donna Anna  and Donna Elvira at Lyric).

The exhibit also showcases the designs for the new production of Don Giovanni that opens the company’s Diamond Anniversary season. Six large-scale costume renderings from designer Ana Kuzmanic will be displayed in the bar area, and operagoers will also be able to view an installation that recreates the feel of set designer Walt Spangler’s Chicago studio, complete with a set model from the new production. Additionally, the space has large video screens that will highlight some of the behind-the-scenes preparations.

The exhibit will be open to operagoers free of charge before curtain and during intermissions of all Lyric Opera performances through the end of 2014.

For more information on Lyric Opera’s Diamond Anniversary Season, including performance dates and times for their new production of Don Giovanni, visit www.lyricopera.org. 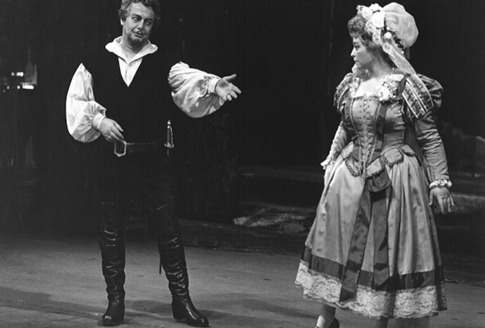