In anticipation of high ticket demand, Lyric Opera of Chicago announced this week that the initial block of tickets for its Spring 2018 production of Andrew Lloyd Webber’s iconic rock opera, Jesus Christ Superstar, will be available for sale a year in advance, starting 10 a.m. on Thursday, March 9, 2017.

Three-time Olivier Award winner Timothy Sheader directs the American debut of his acclaimed 2016 production from Regent’s Park Open-Air Theatre. Sheader will be joined in Chicago by the original creative team from this production to re-envision and mount the grand-scale Lyric production, including Olivier Award-winning choreographer Drew McOnie, Tony Award-nominated set & costume designer Tom Scutt and Olivier Award-nominated lighting designer, Lee Curran. The Chicago production will feature an all-star cast (to be announced at a later date), along with members of the Lyric Opera Orchestra and Chorus.

Jesus Christ Superstar is the sixth installment of Lyric’s Musical Initiative. It follows Alan Jay Lerner and Frederick Loewe’s beloved My Fair Lady, which is being presented at Lyric’s Civic Opera House this season, April 28-May 21, 2017.

“Up to now in our musical theater productions, we’ve concentrated on American classics,” notes Lyric's general director, President & CEO, Anthony Freud, “but in 2017/18, for the first time, we’re producing an iconic rock opera, one that suits a big theater: Jesus Christ Superstar.” In director Timothy Sheader’s production, “Our audience will be reminded that this is a truly unforgettable piece. When it arrived in America in 1972, it became one of the greatest successes in Broadway history, and it’s been enthralling audiences everywhere ever since.”

​Jesus Christ Superstar is an iconic rock opera that reinvented musical theater for the modern age. With music by Andrew Lloyd Webber and lyrics by Tim Rice, the global blockbuster tells the story of the final weeks in the life of Jesus Christ, from the perspective of Judas Iscariot. As Christ’s followers grow more fervent, Judas must make his fateful choice between faith and betrayal. Filled with an exciting mix of musical styles that draw upon 1970s rock, gospel, folk and funk themes, this contemporary imagining of the biblical tale features high-energy dance and powerful storytelling.

​The North American debut of Jesus Christ Superstar will be presented at Lyric’s Civic Opera House, 20 N. Wacker Drive, Chicago, April 27 - May 20, 2018.  Single tickets, which start at $44.00, will be available online at lyricopera.org or by visiting the Civic Opera House box office or by calling 312-827-5600. 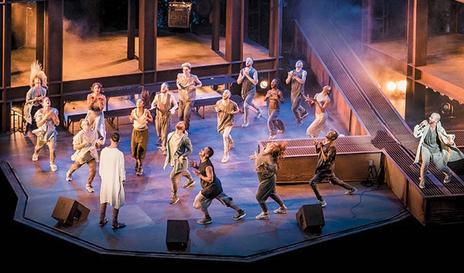