​Lyric Opera’s new season, which launched last week with an opening night performance of Puccini’s La Bohème, came to a halt Tuesday when contract negotiations broke down with the Chicago Federation of Musicians (CFM) forcing a strike by the Federation. The strike threatens a sprawling new season just as it was about to get off the ground. Lyric’s management confirmed Wednesday that Thursday’s performance of La Bohème and an opening night performance of Idomeneo scheduled this Saturday were being cancelled as a result.

CFM released a statement asserting that “radical cuts” that include 5 musician positions (reducing pay by 8 percent), and the number of working weeks for the orchestra—down from 24 to 22—along with the elimination of all Lyric radio broadcasts (due to a loss of sponsorship for the initiative), would essentially “decimate” of the orchestra supporting the opera company. As the statement read, “a world-class opera company needs a world-class orchestra. That is now in danger.”

In a statement released Wednesday, Lyric Opera management maintained that any cuts seen in the new contract proposal reflect inefficiencies embedded in the current agreement, ratified during the 2016-2017 season when Lyric paid $1.8 million (not including the cost of benefits) to orchestra members for work weeks that Lyric could not use. Lyric insists the new proposal only seeks to “reduce a fraction of these payments,” guaranteed by contract.

​Lyric Opera also maintains that while the opera company’s budget may have increased in recent years, some of that increase is due to newer programming that expands beyond grand opera. Lyric noted that ticket revenues have actually remained “flat over the past 6 years,” but that the sources for that revenue have indeed changed significantly emanating from activities (like its annual musical), which the company said “pay for themselves.”

​Citing a decline in opera ticket sales over that same period ($20 million down from $25 million in 2012), Lyric noted that the reductions in the proposed contract stem from fewer opera performances in recent seasons, which is why it has been able to maintain an 80% occupancy rate over time.

CFM doesn’t however agree with those figures, and insists the company’s increased overall budget more than justifies the current contract. Speaking for the orchestra members, William Cernota said in a statement that Lyric is looking to “distract from what they’re doing with their cut-and-slash agenda—demolishing Lyric Opera and asking the musicians to pay for the demolition.”

Lyric released a statement on Thursday announcing they had submitted a new contract offer to CFM in an effort to resolve the strike but that the union rejected the new proposal with no offer of a counter, maintaining that the musicians are pushing for a $2 million budget increase for the term of the contract, something Lyric insists threatens upcoming performances, the layoff of additional staff and the financial future of the company.

Lyric Opera recently signed a multi-year deal with members of the International Alliance of Theatrical Stage Employees (IATSE) and agreed on a contract with the American Guild of Musical Artists (AGMA), which has presented the agreement to its membership for ratification.

​As of yet, the CFM has not returned our request for comment on the new proposal. The union has received support from the orchestral musicians of New York’s Metropolitan Opera via Twitter noting, “Our colleagues in Chicago constitute a world-class opera orchestra, renowned for its artistry and exquisite sound. They deserve to be treated with respect, transparency and an eye toward growth…”

Lyric Opera management maintains they respect the caliber of their musicians and “deeply appreciate” their talent and dedication, and “like all Chicago, would embrace their return to work.”

​With both sides digging in, it’s difficult to tell when that take place.

​UPDATE (October 14, 2018): Lyric Opera of Chicago and the Chicago Federation of Musicians Local #10-208 (CFM) have reached a multi-year labor agreement extending through the 2020/21 season. This evening, the Chicago Federation of Musicians voted to ratify the tentative agreement Lyric Opera reached with them yesterday. No details about the terms of the agreement have yet been made available.

​Lyric Opera has announced that two additional performances of La Bohème have been added it its calendar in January. Casting for the performances will be announced at a later date.

La Bohème continues its regularly scheduled performances at Lyric Opera and Idomeneo, who's debut was cancelled because of the CFM strike will take place October 18. More information can be found at LyricOpera.org. 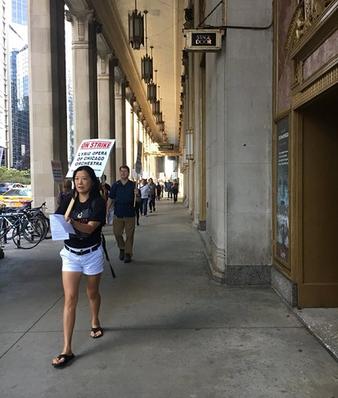