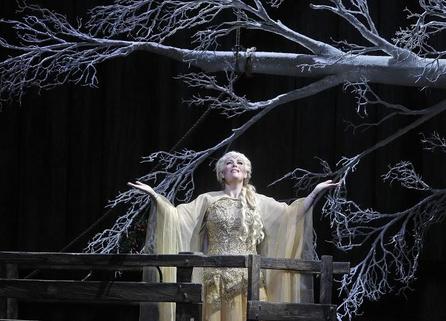 In the opera, Norma (Sondra Radvanovsky), the Druids' high priestess, has broken her vows, having had two children in secret by her people’s enemy, the Roman proconsul Pollione (Russell Thomas/Lyric debut). Now he rejects Norma in favor of another priestess, young Adalgisa (Elizabeth DeShong). When Norma discovers her lover's betrayal, she is enraged. Pollione is eventually captured by the Druids, and Norma is on the verge of suicide, but she cannot. After admitting her own guilt to her father, Oroveso (Chicago-favorite Andrea Silvestrelli) and his fellow priests the pair’s lives and love hang in the balance.

Radvanovsky has triumphed as Norma at the Metropolitan Opera, San Francisco Opera, Bavarian State Opera, Barcelona’s Teatro Real del Liceu, and the Canadian Opera Company, as well as in her role debut at Teatro Campoamor de Oviedo (2011-12). She will portray Norma in a new production to open the Met’s 2017-18 season next fall. She calls this her “perfect role vocally and temperamentally.”

​​The Lyric’s performances mark Radvanovsky’s seventh portrayal of Norma, and Thomas’s fifth. Radvanovsky and Thomas recently earned rave reviews for their performances in this production with the Canadian Opera Company in October.

“As Norma, soprano Sondra Radvanovsky is a force of nature; she handles the demands of the role with an exhilarating combination of bravura and tenderness,” wrote The Star. Russell Thomas used “his tremendous tenor voice to great effect, especially when he muted it to a whisper and revealed his character’s most intimate feelings,” according to The Globe and Mail, which placed Radvanovsky “in the Callas, Sutherland, Cabbale category – an intensely thrilling, spine-chilling demonstration of a great artist at the peak of her powers, an exhilarating, blissful performance.”

​“Norma is one of the most gorgeous and enthralling pieces in the operatic repertoire,” notes Anthony Freud, Lyric’s general director, president & CEO. “The role of Norma is one of the most demanding. Sondra Radvanovsky – our magnificent Anna Bolena in 2014/15 – has triumphed as Norma repeatedly, and will do so again at Lyric. Ryan Opera Center alumna Elizabeth DeShong and our debuting tenor, the remarkable Russell Thomas, will bring their special qualities to this production.”

Says Sir Andrew Davis, Lyric’s musical director, “After 21 years, we’re thrilled that Norma is returning to Lyric. This really is the pinnacle of bel canto – I don’t think you can find more beautiful melodies in all of Italian opera. When Bellini’s music is sung eloquently and with true affinity for bel canto style (as it will be in our production), Norma is an incomparable experience for any operagoer.”

​Norma opens on Saturday, January 28, with seven performances through February 24 at Lyric’s Civic Opera House, 20 N. Wacker Drive, Chicago. Tickets are available at lyricopera.org/Norma or at (312) 827-5600.

​The opening-night performance can be heard live locally on 98.7WFMT and globally on wfmt.com, beginning at 7:15 p.m. on January 28. Listeners will have access to line-by-line translations in real time online at lyricoperalive.org.