On Saturday, September 6, Lyric Opera of Chicago will kick off its 60th-anniversary celebration with the 14th installment of its popular annual Stars of Lyric Opera at Millennium Park concert at the Jay Pritzker Pavilion. The free outdoor performance typically attracts capacity crowds of over 11,000.

During Lyric’s September 6 performance at Millennium Park, audience members will have access to surtitles on mobile devices, at lyricoperalive.org, so those seated on the lawn (or listening to the broadcast on wfmt.com around the world) will be able to see line-by-line translations in real time. And for the first time, members of the United States Air Force Band of Mid-America will perform a pre-concert set between 6:45 and 7:10 pm.

The program for the concert will include selections from Lyric Opera’s 60th anniversary season productions, including Wagner’s Tannhäuser Overture (Dresden version) and Act Two, Final Scene of Don Giovanni.

The Stars concert will be carried live on 98.7 WFMT and wfmt.com. 98.7WFMT host Suzanne Nance and Roger Pines, Lyric’s dramaturg, will co-host the broadcast beginning at 7:15 p.m. on the evening of the concert.

For information on the upcoming free concert or on Lyric’s 60th anniversary season call (312) 827-5600 or visit lyricopera.org. 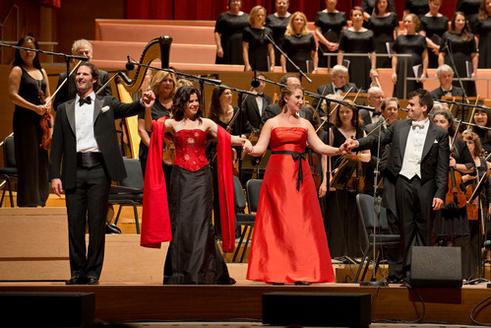