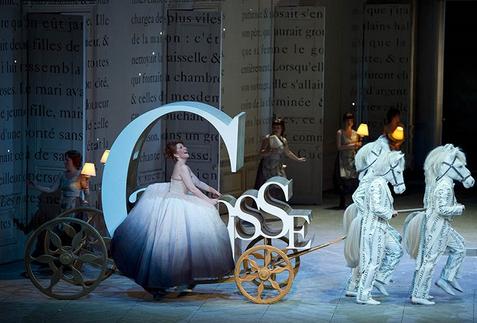 Lyric Opera of Chicago will continue its season with the Midwest premiere of a beloved production of Cendrillon, based on the Cinderella story, in the opera’s first-ever performance on the Lyric stage. Massenet’s work features an intelligent blend of wit, sensitivity, and elegance against the backdrop of a familiar storybook kingdom. The production’s cast includes several company debuts.

Australian soprano Siobhan Stagg makes her Lyric – and U.S. – debut as the title character with the role of Prince Charming by British mezzo-soprano Alice Coote, who performed this role to critical acclaim in the production’s debut at the Metropolitan Opera (2017/18) and was last seen on the Lyric stage in the trouser role of Octavian (Der Rosenkavalier, 2015/16). Coote returns to Lyric in the title role of Handel's Ariodante in March. Rounding out the Cendrillon cast is Canadian coloratura soprano Marie-Eve Munger in her Lyric debut as Fairy Godmother, American mezzo-soprano Elizabeth Bishop in her Lyric debut as Cendrillon’s stepmother Madame de la Haltière, and Australian bass-baritone Derek Welton in his Lyric debut as Cendrillon’s father Pandolfe.

​Lyric Opera music director Sir Andrew Davis will conduct the performances December 1-8 and January 17-20. Canadian-Italian conductor Francesco Milioto will make his company debut leading the January 11 performance. Laurent Pelly, one of France's most sought-after directors of both theater and opera, will make his Lyric debut as director and costume designer. Set designer Barbara de Limburg will also make her Lyric debut with this production. Lyric’s Cendrillon will enjoy original choreography by Laura Scozzi and revival choreography by Karine Girard, with lighting designed by Duane Schuler. Michael Black is chorus master.

“I am thrilled that we are introducing this enchanting and magical piece to Lyric audiences for the first time,” says Anthony Freud, Lyric’s general director, president & CEO. “Laurent Pelly’s production is endlessly witty and alluring, and Sir Andrew Davis, a distinguished interpreter of Massenet, will bring this beautifully romantic score to irresistible life.”

​Adds music director Sir Andrew Davis, “Even more than Rossini’s famous version of the Cinderella story, Massenet’s makes very clear the power of love to overcome all obstacles. That in itself makes it immensely appealing. The casting of Prince Charming with a mezzo rather than a tenor allows for the most exquisite vocal blending in their ravishing duets. With comedy from the bossy stepmother, tenderness from Cendrillon’s father, and fabulous coloratura fireworks from the Fairy, this piece is a feast for the ear. The whole of it is characterized by an elegance that is quintessentially French. It’s great!”

For tickets or for more information, visit lyricopera.org/cendrillon or by calling 312-827-5600.