This February, Lyric Opera of Chicago will present the unforgettable opera, Eugene Onegin, a poignant romantic tragedy about unrequited love and its unintended consequences. Tchaikovsky’s glorious music and Alexander Pushkin’s poetic tale will come alive in a beautiful production packed with a terrific international cast. And for those only familiar with Tchaikovsky’s Nutcracker ballet, Eugene Onegin will serve as a musical wonder and an artistic revelation.

As the opera unfolds, the impressionable country girl, Tatiana Larina (Ana María Martínez, role debut), falls in love with the sophisticated Eugene Onegin (Mariusz Kwiecień). She confesses her love to him in a letter, which he rejects with a patronizing offer of brotherly friendship. When he flirts with her sister Olga (Alisa Kolosova/American operatic debut) at a party, Onegin is challenged to a duel by his best friend and Olga’s fiancé, a hotheaded named Lensky (Charles Castronovo). And, as expected, tragedy ensues. Years pass; the remorseful Onegin returns to St. Petersburg, where he encounters Tatiana, now married to  a Prince (Dmitry Belosselskiy). Onegin finally realizes his feelings for her and deluges her with passionate letters in an attempt to rekindle the love he had rejected earlier.

Acclaimed conductor Alejo Pérez (Lyric debut) leads the Lyric Opera Orchestra and Paula Suozzi serves as the revival director of this production originally directed by Robert Carsen and designed by Michael Levine. Lighting for the opera is designed by Christine Binder. Michael Black serves as chorus master and Serge Bennathan as choreographer.

“Eugene Onegin is the most beloved of all Russian operas, and I’m excited to bring it to Lyric with a cast of true singing actors,” says Anthony Freud, Lyric’s general director, president & CEO. “As the central couple, we have two great Lyric favorites – Mariusz Kwiecień, internationally celebrated for his portrayal of Onegin, and Ana María Martínez, singing her first Tatiana after many huge successes at Lyric, including the title role inRusalka and Donna Elvira in Don Giovanni. With two other renowned artists, Charles Castronovo and Dmitriy Belosselskiy, in key roles, and with the marvelous young conductor Alejo Pérez making his company debut, we can count on a top-flight Eugene Onegin in the sublime production by Robert Carsen that riveted Lyric audiences previously.”

Adds Sir Andrew Davis, Lyric’s music director, “The matchlessly beautiful melodies of this opera, combined with the devastatingly moving story, give it an eternal appeal and audiences never fail to lose their hearts to it.”

Eugene Onegin opens on Sunday, February 26, with eight performances through March 20 at Lyric’s Civic Opera House, 20 N. Wacker Drive, Chicago. The opening performance can also be heard live locally on 98.7WFMT and globally on wfmt.com beginning at 1:45 p.m. on February 26. Listeners will have access to line-by-line translations in real time online at lyricoperalive.org. Tickets to the production are available at lyricopera.org/eugene-onegin or  by calling 312-827-5600. 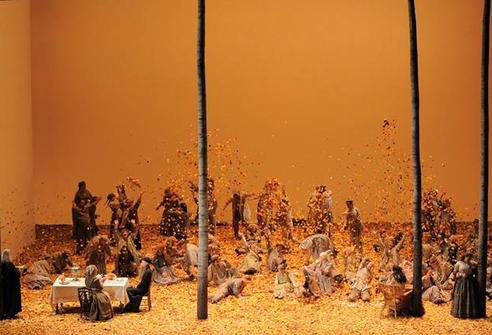