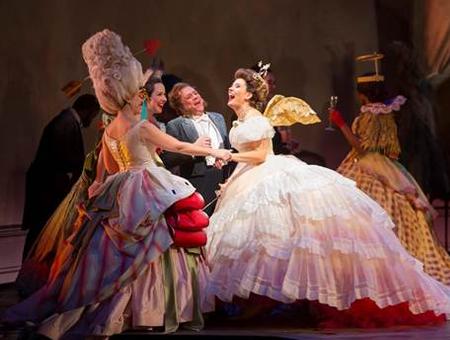 Lyric Opera of Chicago will continue its new season with Giuseppe Verdi’s heartbreakingly romantic La Traviata this winter. The opera features one of opera’s most complex heroines, a courtesan with a heart full of boundless humanity and emotional depth.

​La Traviata boasts one heart-stoppingly beautiful melody after another. Within the social whirl of sophisticated Paris, the courtesan Violetta lives purely for pleasure but longs for true love. She finds the right man in Alfredo, but their happiness is cut short: at his father’s insistence, Violetta leaves Alfredo for the sake of his family. Her spirit broken, her health shattered, Violetta now lives only with the hope that Alfredo will return to her.

American conductor Michael Christie makes his Lyric Opera debut with La Traviata, and American director Arin Arbus returns to lead the production. Set designs by Riccardo Hernandez, costume and puppet designs by Cait O’Connor, and lighting design by Marcus Doshi will round out a robust and visually stunning set.

“La traviata is, in many ways the perfect opera: glorious music full of tenderness and humanity, and one of the most heartbreaking of tragic love stories,” says Anthony Freud, Lyric’s general director, president & CEO. “With Albina Shagimuratova as Violetta and our wonderful cast, this is sure to be a spellbinding series of performances.”