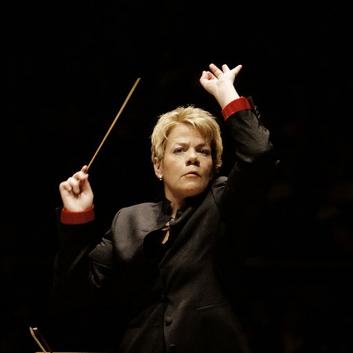 Ravinia President and CEO Welz Kauffman recently announced that acclaimed conductor Marin Alsop, who headed the festival’s admired multi-season celebration of Leonard Bernstein, has been named Chief Conductor and Curator of Ravinia Festival, beginning with the 2020 season. The position was created specifically for Alsop, the first person to have the title in Ravinia’s 116-year history. The two-year appointment includes Alsop conducting two weeks of concerts by the Chicago Symphony Orchestra, including events celebrating legendary women and the centennial of the 19th Amendment. Ravinia has hosted the CSO in its summer residency since 1936.

“Marin Alsop is a consummate musician, whose varied experience throughout the world—from São Paulo to California, from Baltimore to Vienna—is unsurpassed. The fact that she enjoys and excels in the standard repertoire, new work, jazz, and musical theater makes her a perfect fit for Ravinia, where we cross genres on a daily basis,” Kauffman said. “She gets everything that Ravinia is about—the tradition; the unique audience; the eclectic mix of music; the atmosphere and environment; the El Sistema approach to music education; our very insightful Ravinia Family of volunteers, trustees, and staff—and she is unfazed by the vagaries of working out of doors!”

Don Civgin, Chairman of the Ravinia Festival Board of Trustees, said, “In programming his final season at Ravinia, Welz advocated to create this role for Marin—a conductor of great global acclaim who also enjoys an intimate connection to Ravinia—to maintain consistency, through this transitional period, of the festival’s high artistic standards and creativity in booking the eclectic array of artists that Ravinia has proudly presented throughout its colorful history.”

“I’ve been involved in some extraordinary experiences at Ravinia, and have felt a real connection to the audiences, trustees, Women’s Board, and staff, and, of course, there’s nothing like standing in front of the inimitable Chicago Symphony Orchestra,” Alsop said. “I’m certain this appointment promises even more extraordinary experiences to come.”

​The Chief Conductor of the ORF Vienna Radio Symphony and Music Director of the Baltimore Symphony Orchestra, Alsop has earned myriad honors, including a MacArthur “Genius” Fellowship and the prestigious Association of British Orchestras Award. Throughout this year’s 250th birthday celebration of Beethoven, in partnership with Carnegie Hall, she will lead a “Global Ode to Joy,” conducting 11 orchestras on six continents in Beethoven’s Ninth Symphony, with local culture influencing the work, including a new interpretation of Schiller’s text in the last movement by Baltimore rapper Wordsmith. She is very involved in music education, using an El Sistema-based method similar to what Ravinia uses to create student orchestras through its Reach Teach Play programs. Alsop, the final protégé of Leonard Bernstein, was appointed in 2018 to curate Ravinia’s multi-season celebration of Bernstein. The role has been expanded to help guide Ravinia’s musical future in 2020, which marks the final season with Kauffman at the helm of the festival.

Kauffman and Alsop share a long history. He was the first to book her to conduct the New York Philharmonic in 1999 and introduced her to Chicago audiences at Ravinia between 2002 and 2005 when she led the Chicago Symphony Orchestra in works by Rachmaninoff, Shostakovich, excerpts from John Adams’s Nixon in China, and John Corigliano’s Symphony No. 1, which paid tribute to his friends and colleagues lost to AIDS. She subsequently led the CSO at Symphony Center downtown. Collaborating with Kauffman over the past two years, she has programmed a collection of intimate and large-scale Bernstein concerts that have proven popular with audiences and critics, particularly the rarely performed music theater work Mass, which was performed in both 2018 and 2019 and taped live at Ravinia to air as a national television special this summer.

​“Alsop is known as a great colleague, serious of intent, brilliant, and fun to work with and for,” Kauffman said. “She has great respect for the Chicago Symphony, and our Ravinia audience has noted frequently that it feels to them like a two-way street between this most prestigious of ensembles and the Maestra, who fits in so well yet asserts her own informed point of view. She appreciates the creature comforts of the festival grounds, so beautifully reinvigorated over the past two decades with such amenities as the Dining Pavilion, Grand Entrance, and the RaviniaMusicBox experience center, which will have its grand opening this June.”