​After the curtain call and deserved standing ovation following the April 25 performance of Tracy Letts' wonderful new play, Linda Vista, at Chicago's Steppenwolf Theatre, ensemble member and actor Tim Hopper stepped out of character to do something that had to have stunned the audience: he asked for a moment of silence in remembrance of Martha Lavey. I don't know whether or not there has ever been a moment of silence after a Steppenwolf show before April 25; I'm not sure how to even research that. I do know that Martha Lavey is the first ensemble member Steppenwolf has lost through death and for that alone the moment would be justified. But having held the longest tenure as artistic director of what is arguably one of the greatest theaters in this country, the moment of silence was also justly earned.

Martha Lavey, a name well-known in Chicago theater circles, served as artistic director of Chicago's most famous theater, Steppenwolf, from 1993 to 2015. During that time, Tim Hopper himself rose to theater stardom—as did so many Steppenwolf ensemble members. Of course, film stardom came as well for many along with literary fame for ensemble members who have penned scripts that have earned their place in theater history. It was under Martha Lavey's leadership that so much happened for a great many.

The difficulty in making the weight of this loss truly felt might be ascribed to the usual suspects: the evidence of great leadership is most often clearest in the work of those nurtured through that leadership. The work seen was evident on that Steppenwolf stage before the moment of silence. Tracy Letts, clearly Chicago's preeminent playwright, owes much to Lavey. It was Lavey who realized what Letts' had to offer when response was mixed for his first Steppenwolf production as playwright, The Man From Nebraska. Likewise, another Steppenwolf playwright, Bruce Norris found his star rise under Lavey’s tenure; both would go on to win Pulitzers. But Martha Lavey’s contributions are greater than the trees; she didn't build the forest, but she was instrumental in its growth.

​Like the great Oz working behind the scenes—not to minimize her 30+ acting roles onstage in Steppenwolf productions—her omnipresence was great. In a Steepenwolf release, her achievements can barely be crammed onto a single page, with no room for elaboration. One thing to note immediately is timing: Steppenwolf moved into its current space in 1991, Lavey joined the Steppenwolf ensemble in 1993 then assumed the position of artistic director in 1995. This was a critical growth period for both Steppenwolf and Lavey; the rapidity is also worth noting. Joining forces and going forth at such a swift pace meant both Steppenwolf shaping Lavey and Lavey shaping Steppenwolf simultaneously by necessity; that one would influence the other was inevitable.

It's important to take a moment and consider the well-documented leaps and bounds with which Steppenwolf grew. From the Unitarian church in Deerfield, Illinois in 1974 to the Immaculate Conception Church in Highland Park in 1976, Jane Adams Hull House in 1980, 2851 N. Halsted at 2851 in 1982 and finally its current home up the street at 1650 Halsted in 1991. That's a lot of moving. For a theater company, that much moving can only mean the necessity of rapid growth. And that includes the requisite itinerant stops along the way.

One of those stops was at Chicago's famous Theatre Building (now called, 773) on Belmont in 1980. That's where a fresh undergrad Martha Lavey saw Steppenwolf's production of Ralph Pape's, Say Goodnight Gracie.  Awestruck more than starstruck, Lavey saw what she wanted to be a part of, not daring to dream that she might one day lead, the ensemble at its own five-story facility. In hindsight, it strikes one what it must have been like to be an audience member for that production, watching John Malkovich, Joan Allen and Glenn Headly at a time when the three were more starving artists than stars. Lavey is famously remembered to have said, “I wanted very much to be an actor. I had no idea, really, how to do that, but I felt, watching those Steppenwolf actors, that that's what I wanted it to be like.”

​From there, she took classes at Steppenwolf and finally found her way onstage. And the ascension for both continued:
​

Yet there was no sense that Lavey yielded all this power with anything but grace. Her force was always there, but it was not important to her that she be seen as a force; she simply wanted to get the job done. One of the reasons Steppenwolf has created so many stars is because the concept of diva is unknown to them. Ensemble means ensemble, egos are checked with the coats at the door. Martha Lavey was able to flourish in this environment, hence Steppenwolf was able to grow.

After 20 years leading the ensemble, after more than 30 performances on stage as a Steppenwolf ensemble member, Lavey stepped down as artistic director in 2015. A stroke in the middle of the season might have made it impossible to continue. It was another stroke that ultimately took her from us. She did not necessarily foresee it. In the book to mark Steppenwolf's 20th anniversary in 2000, Lavey wrote, “It's wonderful to be 25–I look forward to reading the notes of the artistic director (currently some 10-year old kid in the school play) at our 50th anniversary.”

​No one could quite foresee it. As this stunning moment of silence drew near after that April 25 performance of Linda Vista, Tim Hopper noted that Martha Lavey's presence could be felt “in the bricks in this building.” Quite naturally, Lavey and Steppenwolf were one and the same. “Artist” is in fact the largest part of “artistic director.” Martha Lavey was the definitive artist in a theater filled with great artists, and like many great artists, it is through her absence that her presence will be most poignantly felt.

Martha Lavey,ensemble member and  former artistic director for Steppenwolf Theatre, left an enduring legacy when she recently passed away, and the impact of her life and work is felt the world over (photo courtesy of Steppenwolf Theatre).

​In the wake of her recent passing, Steppenwolf ensemble member and former artistic director Martha Lavey's legacy and impact are potent and far reaching. 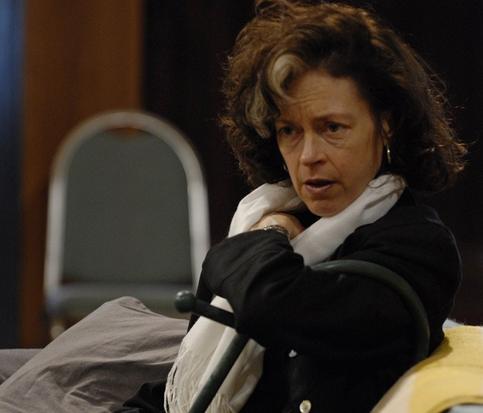