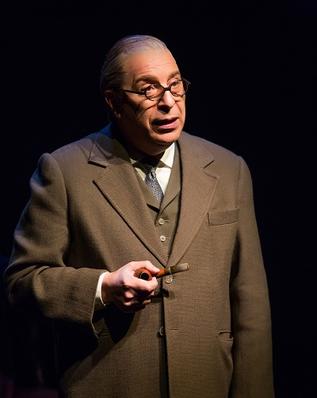 After a seven-year absence, Fellowship for Performing Arts is making its triumphant return to Chicago this summer with an all-new original production starring Equity Jeff Award winner Max McLean (Mark’s Gospel, The Screwtape Letters) in the one-man/one-act show, C.S. Lewis Onstage: The Most Reluctant Convert.

Max McLean’s 2008 production of C.S. Lewis’ The Screwtape Letters has been cited as  “the most successful production in the history of the Mercury Theater,” and his one-man show Mark’s Gospel earned him the 2009 Equity Joseph Jefferson Award. This summer, McLean will bring to life one of the most engaging personalities of our age, taking audiences on British novelist C.S. Lewis’ fascinating journey from atheism to Christianity.

Adapted exclusively from Lewis’ writings, McLean inhabits Lewis onstage from the death of his mother and his estranged relationship with his father to the experiences that led him from vigorous debunker to the most vibrant and influential Christian intellectual of the 20th century. With entertaining wit and exhilarating insight, C. J. Lewis On Stage has been called “masterful…. spiritually invigorating and hugely moving” by The Washington Post.

Said McLean, “We are thrilled to return to Chicago with our latest production.” FPA’s founder and artistic director, McLean adapted and performs the show, which visits the agonizing events that led to Lewis’ conversion.

​For more information or for tickets, call 773.325.1700 or visit mercurytheaterchicago.com. visit www.FPAtheatre.com.