This fall MCA Stage at the Musuem of Contemporary Art will present The Ventriloquists Convention, a new contemporary theater work that centers on the popular annual convention that takes place at Kentucky's Vent Haven Museum, the world's only museum of ventriloquists' dummies. The inventive piece imagines meetings among the convention delegates and their dummies, who each maintain distinct voices and identities. Influential European director/choreographer Gisèle Vienne will make her Chicago debut with this original project. She has collaborated with American author Dennis Cooper for more than 10 years, and they are joined for this project by Puppentheater Halle, an acclaimed German puppet-theater company.

Gisèle Vienne and Dennis Cooper developed their approach for this show from documentary and fictional sources, building it into a group of quirky portraits of ventriloquists celebrating their shared interests and friendship. The show explores why ventriloquists do what they do, and what lies behind the relationships that they have with their dummies. Performed by nine ventriloquists-puppeteers, the piece hinges on the use of multiple layered dialogues, including the ghostly, non-physical ventriloquists' voices. These portraits enable Gisèle Vienne to continue her ongoing research into the interplay between physical presence and dissociation that she had developed in prior projects.

Gisèle Vienne is a director, choreographer, and visual artist born in Austria and based in Paris. She was trained as a musician, earned a degree in philosophy, and went on to the foremost school for puppetry, Ecole Supérieure Nationale des Arts de la Marionnette. She works regularly with the writers Dennis Cooper and Catherine Robbe-Grillet, the musicians Peter Rehberg and Stephen O'Malley of drone metal band Sunn O))), and actor Jonathan Capdevielle. Since 2005, she has frequently exhibited her photographs and installations, including at the Whitney Biennial in NY (2012) and The Pompidou Center in Paris (2012).

Dennis Cooper is an American novelist, poet, and critic based in Paris and Los Angeles. Regarded as a master of transgressive literature, he is known for his minute observations of human relations and obsessions. He has published nine novels, most recently The Marbled Swarm.

Presented as part of the MCA's Global Stage Series, The Ventriloquists Convention  takes place November 12 through 14 in the MCA's Edlis Neeson Theater. 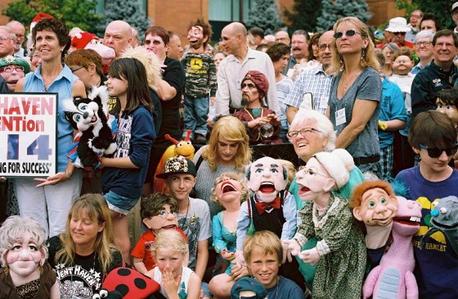